Overkill – Hello From The Gutter

Mayhem – From The Dark Past

Immolation – I Feel Nothing

Dream Theater – Metropolis Pt. 1: The Miracle And The Sleeper

Inconcessus Lux Lucis – At The Behest Of The Sinister Impulse

Sabaton – Into The Fire

Napalm Death – From Enslavement to Obliteration

Nuclear Assault – Fight to be Free

Cannibal Corpse – Only One Will Die

Cannibal Corpse – In The Midst Of Ruin

Cannibal Corpse – Destroyed Without A Trace

Be’lakor – The Dream And The Waking

The Absence – From Your Grave

Manegarm – Call Of The Runes

Summoning – Land Of the Dead
Thee After Hourz O’ Power

I didn’t plug that Tomb Mold show, but they’re pretty well regarded on r/metal. In fact, their newest album Primordial Malignity ranks as the top album of 2017 in r/metal. This is the show to build up your metal e-cred and soak up that precious karma.
Mayhem is playing the entire De Mysteriis Dom Sathanas this Sunday at St. Andrews.  I saw Mayhem play this setlist in Chicago this year and it was lit. Mayhem set the venue on fire, figuratively speaking, and they will surely play with the same burning passion this Monday. Fire puns aside: skip church and go to St. Andrew’s instead, and bring a fire coat just in case.
Sabaton and Kreator have announced they will be touring North America early next year. It’s a weird mix, but I kinda like it. If you recall our end of the year show for last year, Bacchus had some choice words on Sabaton’s newest album. That said, he’s still a big fan of their older material and has attested on many occasions that they put on a fun show. I’ve heard positive things about Kreator’s live shows as well, and I’d gladly stand through some power metal to hear Kreator (I’m kidding, I actually enjoy Sabaton sometimes).
If you haven’t checked out our interview with Inquisition, check it out. Dagon (lead singer and guitarist) talks about Inquisition’s creative evolution, the North and South American scene, and his thoughts with the whole black metal shows being shut down. His bit about the latter was quite insightful, and I highly recommend giving it a listen.
Look what came in the mail the other day! 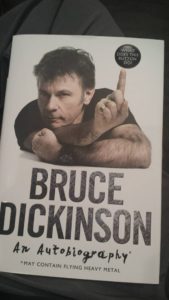 Shoutout to The Syndicate for the killer gift. Seeing this rockstar autobiographies takes me back. In my middle-school, they dedicated a half hour of silence each day in an effort to get us to read. As you would expect, nobody actually read and everybody just hid their phones in front of a book, except teenage Spaceman who looked forward to reading the newest rockstar autobiography everyday. Now, Spaceman just reads textbooks from classes he hates and rarely has time to read anything he actually enjoys. To me, Bruce Dickinson is the most interesting metal artist out there; he’s accomplished more childhood dreams in his lifetime than I have childhood dreams period. Thanks for the feelings of inadequacy, Bruce. One thing I am looking forward to reading about is if he confirms the rumors of what caused his throat cancer, so that I can do my best to avoid it. Luckily for you dear readers, we’ll be giving one of these bad boys out. Stay tuned…

Thanks for reading folks, see ya next Thursday