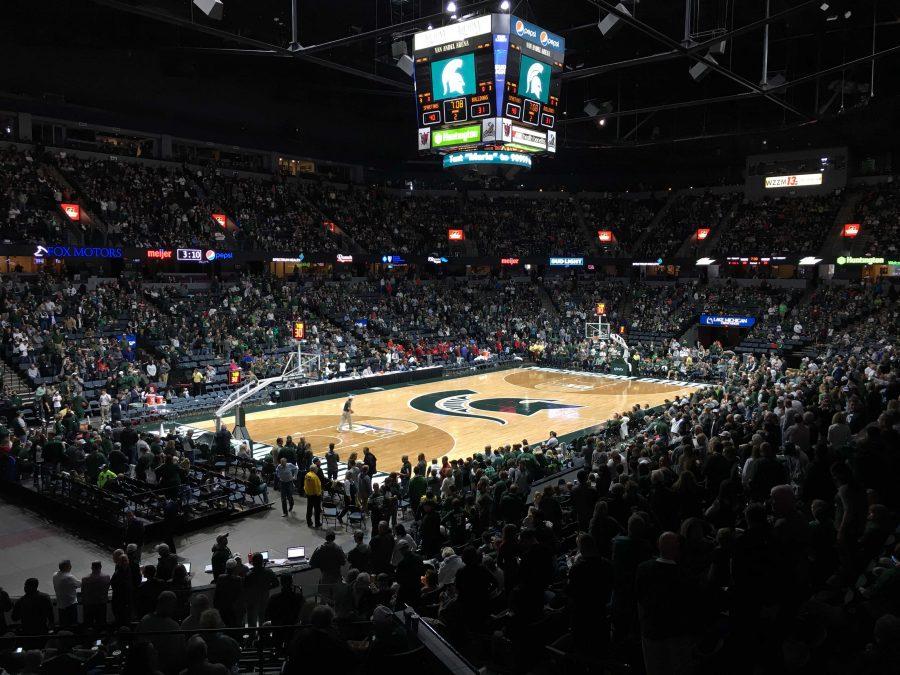 Just before tipoff, head coaches Tom Izzo and Mark Fox were awarded a check totaling $339,448.90. The check was made out to the American Red Cross’s International Services and the Georgia Region to help aid the efforts in hurricane relief in Georgia and the Bahamas.

The Spartans started off this game with much more energy than their last appearance, an unimpressive eight-point victory Thursday night against Division II Ferris State. A 9-2 run to kick off the game was powered by two jumpers from Josh Langford, who bounced back after an 0-for-12 outing Thursday. Langford’s 11 points came on 5-of-8 shooting for the day.

“Honestly, I wasn’t thinking about making any shots,” Langford said. “I know what kind of player I am. I know how much work I put in this summer. I just want to come in and do my job and [perform] my role to the best of my abilities.”

The Bulldogs and Spartans traded blows throughout the first half, exchanging leads until Miles Bridges scored nine of the Spartans’ 11 unanswered points in the final 3:11 of the half. Bridges led the Spartans with 21 points and 10 rebounds on the day, although his coach is still asking for more from his superstar.

“He’s too unselfish,” Izzo said. “He maybe took a shot or two that he shouldn’t have, but he probably didn’t take six that he should’ve.”

Ward was locked in a battle most of the game with the Bulldogs’ star forward Yante Maten. A Pontiac, Mich. native, Maten made his return to the state of Michigan in triumphant fashion, leading all scorers with 33 points on 9-of-19 shooting.

“I should be fired for letting him get out of this state,” Izzo joked. “He seems like a great kid. I just love the way he plays.”

Although Maten, the preseason SEC player of the year, scored seemingly at will, Izzo said that Ward benefitted from the early matchup against one of the top players in the country and even held his own at times.

The Spartans couldn’t quite deliver a knockout punch in the final five minutes, allowing the Bulldogs to claw their way back into a nine-point game with 1:43 left. But two late zone offense assists from Cassius Winston, which pushed his total on the day to 10 dimes, were enough to prevent a tight ending.

Both coaches were complementary of each other’s teams in the postgame, gleaming praise all around for the two marquee schools planning a game like this on such short notice. Fox then gave praise to the Spartans’ talent and hopes for the upcoming season.

“I vote in the coaches poll, and I voted Michigan State No. 1. That’s how good I think they are,” Fox said. “And after seeing them today, the next time we have to cast a ballot, they’ll still be at the top.

“They’re an elite-level team. They’re very complete. They have depth and quality in the backcourt. They have very good perimeter shooting and obviously great wing play. They have so many long and big bodies up front that can score. They’re as complete a team as I’ve seen in college basketball in quite some time.”

The Spartans return home for their final exhibition game of the season Friday night against Division II Hillsdale College. Tipoff is scheduled for 7:00 p.m. from the Breslin Center.