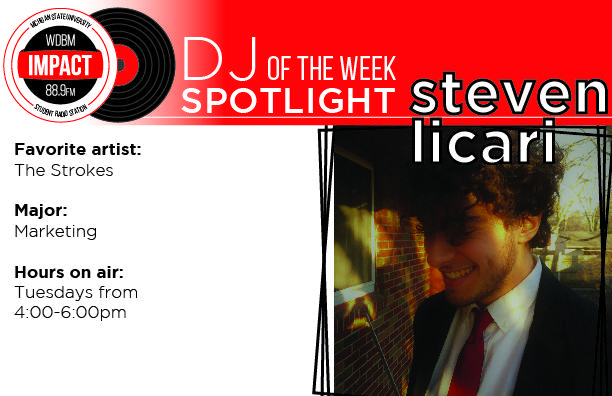 Our new DJ Spotlight of the Week is the one and only, Steven Licari! Steven has had a long journey with Impact from being a street team volunteer, to an Event Staffer over the summer, and most recently as a new Air Staff coach! Catch this marketing major live on Tuesday’s from 4PM-6PM and request the best and deepest cuts from The Strokes!

1. What made you decide to join Impact and become a DJ?

I joined the Impact because everybody seemed like they had cool taste in music and I joined street team so I could have fun working with people I musically identify with. Honestly, I became a DJ because I had to get air trained, but I stuck with it and I ended up enjoying it a lot.

2. What has been your best on air experience?

I’ve had many amazing experiences in the studio, but one that is coming to my mind right now is the first shift that I decided to start digging into the wall of CDs. I started playing songs from our artists that I knew weren’t in our virtual library, but ones that I really enjoyed. Not only was it nice to just get some variety, but it also got a lot of people calling in to say how much they were digging my selection. That was probably the day where I started feeling like I was making it as a DJ. Way cool.

3. How do you think working in radio will affect your future career and life experience?

Working on air opens up doors for employers that are looking for people who know how to compose themselves well. It’s a channel for self-branding. You are actively working on strategies for all the different ways you can present yourself for an audience. There have also been many situations where things have gone wrong. For example, sometimes our software freezes, and, if you’re on air when that happens, it requires you to think on your feet to troubleshot. Being put into situations where you aren’t exactly sure what to do helps you become more prepared to take control in situations when things go wrong. Also, it’s just fun. DJing is a part of my week where I get to just take two hours for myself and jam. Talking on air gets pretty comfortable and it’s definitely something I’ll hold close to me for a while.

4. What is your favorite part of the station?

My favorite part of the station is events. I worked events this summer, I show up to volunteer at them all the time, they’re great! All the events is the part of Impact that brings all the people together. It’s where I’ve made many great friends. There are some truly wholesome people at the Impact, and about 99% of them won’t judge you for listening to weird music. Oh, if you’re wondering about my favorite thing inside the actual station, I’d say it’s front desk. That’s where the good times happen.

5. If you could play an artist non-stop on the air, which would it be?

The Strokes, again, duh. I actually just played three Strokes side project songs back to back to back on my last shift. First, it was the rhythm guitarist, Albert Hammond Jr, followed by the front man, Julian Casablancas, then the lead guitar, Nick Valensi, with his band, CRX. After that, I decided to stop, but I’ve definitely considered, multiple times, just playing an hour’s worth, maybe even a whole shift, of only The Strokes. This is something that is always on my mind.

6. What is the best concert experience you have had? Why?

There are so many factors that go into making a concert a crazy and memorable experience. It could be the energy that the band gives off, it could be how uplifted you were by their presence, or it could just be the fact that you’ve loved this band for so long and now you’re finally getting to see them. Some of my favorite artists as far as their sheer ability to entice tremendous amounts of hype were Cage the Elephant – they are all over the place, never sitting still, belting out lyrics, it’s wonderful – Flint Eastwood, definitely – the lead singer, Jax, just has such an inspiring and uplifting vibe, she knows how to touch and move crowds – and Waka Flacka Flame – Waka just is the hype, there’s no getting around it. I lost my phone in a Waka Flacka mosh pit that started from some dude doing a backflip right as the beat dropped for “Hard in the Paint” and got it back unharmed. If that wasn’t one of the most triumphant moments of my life, I don’t know what would be. Some of the most uplifting experiences I’ve had were probably Waking Windows – for two reasons: one, Car Seat Headrest was my first mosh pit ever, and that was most dope to just let everything go to that band; two, Whitney was just so beautiful and melodic. Flying Lotus, not at all what I was expecting, but his lights and effects were incredible! He had a 3D set up with him in front of a screen and a sheer screen in front of him, lights on the side, it pulled you into the experience. It was a show where you didn’t even have to engage because you were completely mesmerized. Also, he played the trailer for his horror film, Kuso, which looked insane. I really need to see it. This one, as much as I’d hate to admit it now, Drake, was powerful. I saw him on his tour for If You’re Reading This, It’s Too Late. It was called The Jungle Tour, based off a track from the mixtape. Just like everything Drake does, it was dramatic, and he does a great job making it feel like you’re the only one there listening. It was a great experience event though I feel a different way about Drake now. Hey, I still remember that moment this day, so he did something right. For artists that I just had a burning desire to see, my top three I have seen are, in no specific order – Red Hot Chili Peppers, Anderson Paak, and a tie between MGMT and Peter Frampton. Sadly, I haven’t seen The Strokes play yet, but just to be in the presence of musicians you idol, is an incredibly humbling experience in itself. Actually wait, I have seen a Stroke, one fifth of The Strokes. I got to see Nick Valensi at El Club last year and almost wept. The Strokes were my upbringing, the only band I listened to in middle school. I’d be a different person today without them. I had to redefine my understanding of the phrase star struck when I got so close to him at CRX. Dang, it’s really hard to just narrow down one favorite show when you get the opportunity to see so many acts that just kill it.

Our next DJ Spotlight of the Week will be posted on 10/16!