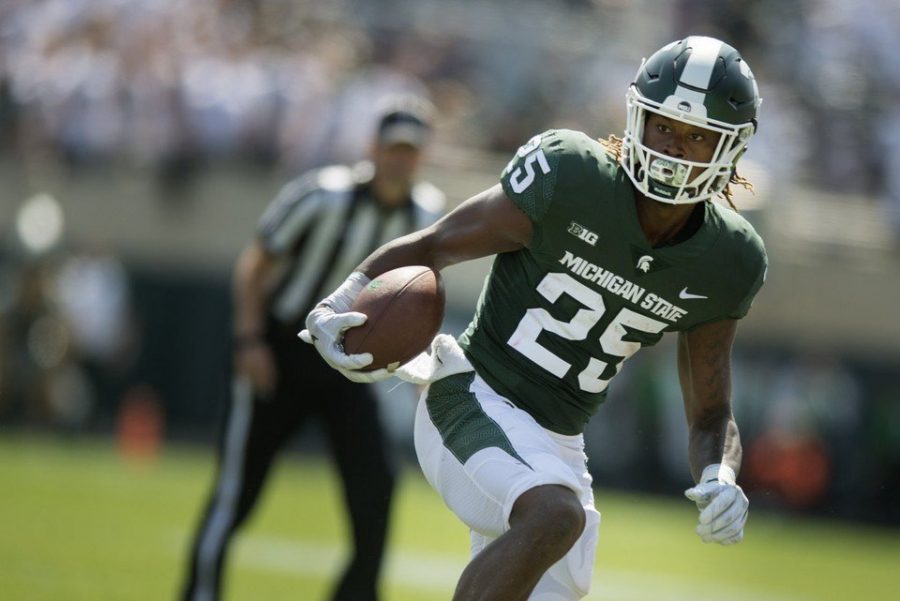 In an offseason dominated by scandal and separation, along with the highly anticipated return of sophomore quarterback Brian Lewerke and the three-headed monster running back trio, Michigan State wideout Darrell Stewart Jr. wasn’t exactly the center of attention heading into Saturday’s opening contest against Bowling Green.

With Trishton Jackson and Felton Davis III headlining MSU’s receiving corps, most fans probably forgot that Stewart was even listed as a starter. He never got much shine. Even true freshman Hunter Rison got more buzz, in spite of being listed directly behind Stewart at the flanker position. Still, Stewart knew over the offseason that this was his year to make a splash.

“It does feel a little different,” Stewart said after Saturday’s win over Bowling Green. “But one thing Coach Sam (Terrence Samuel) and Coach D do, is try to make everything similar and try to cut everything down so some of the young guys, like me…can react and just play.”

Stewart also made it clear that the coaching staff had high expectations for him since day one at MSU.

“Throughout this program, Coach D always told me when I first got here, he’s going to breed me to be one of those guys — the playmakers. He was just telling me just [to] be my game. Don’t worry about nothing else. Do my game. I mean, he was putting me in different situations in practice and in camp, and I mean, it gravitated from there.”

During Saturday’s game, PA announcer Terry Braverman uttered the name “Darrell Stewart” more than almost any other player on either team. That’s because he made major contributions in the air, on the ground and as a returner. The sophomore did some of everything.

He finished the day as Lewerke’s favorite target, racking up six receptions for 86 yards including a 40-yard completion, good for MSU’s biggest offensive play of the game. He also composed three jet sweeps for 28 yards, a kick return for 22 yards and three punt returns with a long of 10 yards. After just one game, he already blew away his 2016 stats where he collected just three receptions for 29 yards and two rushes for three yards.

“Big game by Darrell Stewart,” coach Mark Dantonio said at Saturday’s post game press conference. “I thought he was very effective catching the ball and running the ball and returning kicks and punts. He had a big game and then, obviously, you got some guys making big plays around him.”

“Well [Stewart] had a great camp,” Warner said after the game. “And going into this game, we felt like he could be that guy that we could get the ball to numerous times, in various ways in the running game and the pass game. He played well.”

Stewart asserted himself as an offensive weapon primarily because of his reliable hands complemented by speed, agility and athleticism. He was simply too fast for Bowling Green to handle.

“My eyes got big like a bunny rabbit,” Stewart said on his 40-yard catch that he took to the BG 2-yard line. “I was about to jump out of my body, I wanted to score so bad. But I mean, unfortunately, I didn’t score. But the good thing is some guys did.”

A few plays later, Stewart was involved in one of the more important plays of the game. He was the victim of a targeting flag by Falcon defensive back Fred Garth. Garth was ejected following a very quick review. At first glance, this appears to be nothing more than a fatal mistake made by Garth. But according to Stewart, it was all a part of the plan.

“I’m a LeBron James fan,” Stewart said before cutting himself off. “I mean I’m a Kobe Bryant fan — let me get that right,” as Stewart pointed to a nearby camera grinning. “But I’m [also] a LeBron James fan so I try to, you know, kind of fake it out and get the penalty, which I did. Definitely trying to draw the foul.”

In spite of Stewart’s success in the passing game, he claims that his biggest strides were in the return game. In fact, it was evident on the very first play of the game that Stewart possessed returning skills that MSU has not seen at least since the years of Keshawn Martin.

Stewart’s opening return went 22 yards to the MSU 34-yard line. This statistic is nothing extraordinary, but Stewart was one missed block away from a stride deep into Falcon territory. Still, Stewart worked with what he had, scurrying his way passed the unblocked defender to the near sideline for a solid pickup.

“The first kick return I’m thinking in my head like, ‘when you get the ball just go,’” Stewart said. “I mean when it happened, [I] broke the tackle and my eyes just got big again and I was like, ‘man I got to get to the end zone.’”

Stewart’s still looking for that first touchdown in a Spartan uniform. But in any case, Saturday’s breakout performance proves what MSU football fans have known for a long time. 2017 will be the year of the underclassmen. As a sophomore, the only question on Stewart’s mind is how high he can go from here.

“I feel like I showed a little bit of what I can do,” Stewart said. “I mean, there’s always better. It’s never enough. I feel like whoever next week is, which is Western Michigan, it’s always time to get better.”