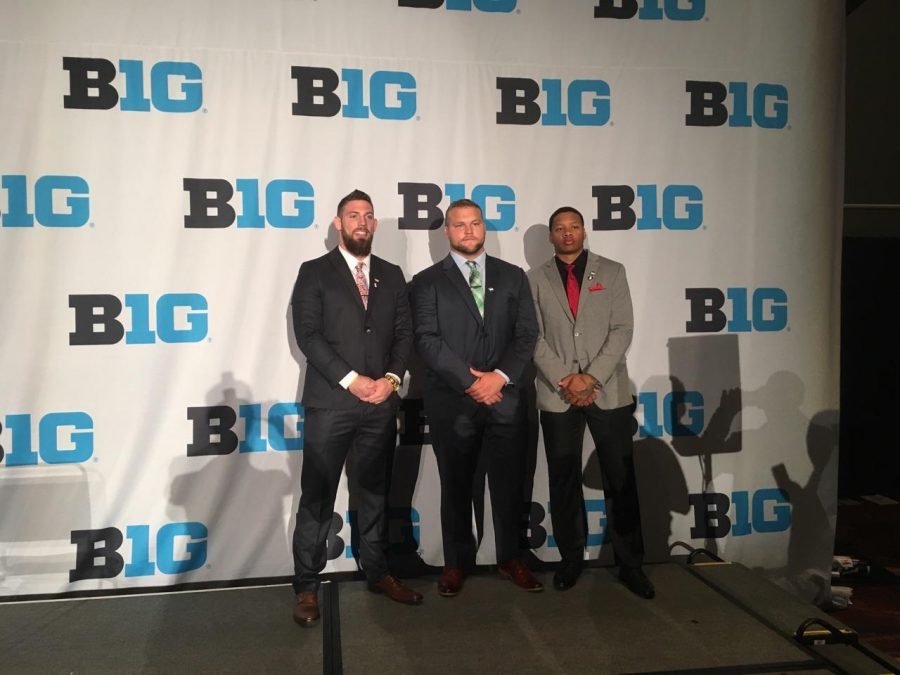 CHICAGO — In an offseason full of controversy, following a 3-9 season, Michigan State came into B1G Media Days under the microscope. Impact Sports’ Zach Swiecicki and Zach VanNieulande traveled to Chicago to hear from Mark Dantonio, Brian Allen, Gerald Holmes and Chris Frey. After the final of two days closes, they give their biggest takeaways and analysis of the Spartans’ time in the Windy City.

Mark Dantonio may have had the most successful 15 minutes at the podium on Day One, or even all of Media Days.

Obviously, some of his answers were premeditated, but everything was purposeful. Dantonio showed no signs of backing down to the tough questions, as well as the ability to joke around when asked about the team’s offseason positional bowling competition.

“Sometimes you’re measured a little bit by how you handle the problems not just in all the good times,” Dantonio said. “We’ve had some good times and those are easy to stand up there and sing the fight song and put a hat on. [It’s] not as easy when you are going through these type of things, but at the end of the day, that’s why I was hired. I was hired to solve problems and that’s what we’re going to do.”

You wouldn’t know that Mark Dantonio had just undergone the worst season and offseason in his Michigan State career based on his attitude at Media Days. The usually stoic head coach came off as confident and jovial to reporters, while acknowledging that there is a lot of work to be done.

This was reflected during an interesting exchange with reporters during the individual podium session when he addressed a question about writing his own ending at MSU.

For someone who is considered to be on the hot seat by some observers, Dantonio was cool, calm and collected this week, and Spartan fans should be optimistic that 2016 was merely an anomaly.

Brian Allen was the MSU representative at Media Days who has received the most preseason accolades, being named to watch lists for the Rimington (best center) and Outland (best interior lineman) Awards. Those do not matter much to the senior center, though.

“It’s cool to be on those lists, but at the same you gotta focus on the season,” Allen said… “I don’t play good to win those awards, I want to win football games”.

Allen also expressed optimism about his offensive linemates, particularly at the tackle position. He singled out sophomore Cole Chewins, who is projected to start at left tackle.

“(Chewins) puts everything into it,” Allen said. “He’s fully engaged, fully committed, and he’s starting to get a lot bigger…He’s really trying to help out the young tackles too.”

One of those young tackles is redshirt freshman Luke Campbell, who is in line to take over opposite Chewins this fall.

“(Campbell) has an offensive line attitude, he wants to hurt the guy across from him,” Allen said. “Once he gets there, he’ll be a good player.”

As the de facto leader of an area of question going into the season, it is good to hear Allen singing the high praises of the young players.

Senior running back Gerald Holmes seems poised to be one of MSU’s captains in 2017. Holmes split time last season with LJ Scott and Madre London, but that is not stopping him from becoming a vocal leader in the locker room this summer.

Amongst his 45 minutes answering questions, Holmes said the team is focused on winning one game at a time. He also isn’t worried about the “hot hand” mentality with the running backs — they all support each other. He also complemented his team’s ability to block out outside noise. But, perhaps, the biggest sign that Holmes has truly accepted a leadership role came when he talked about the player-only meetings he started hosting, leaving the floor open for anyone to talk.

The Chip has Changed for Frey
@vannieulande —

“This is a different chip.”

Senior linebacker Chris Frey gave his synopsis of Michigan State’s attitude going into the 2017 season. In previous seasons, it was about MSU proving wrong the doubters who thought they had no business being in the national conversation. This time around, the Spartans’ “chip on the shoulder” is to prove to their own fans and themselves that 2016 and its subsequent offseason were just an aberration.

In answering a question about whether or not MSU’s reputation has been tarnished due to offseason controversies, Frey said, “It tarnishes the reputation, and the name, and the brand of our team. With that being said, it’s our job as a team and Coach D’s job as a coach, and all of our coaches’ job to put that behind us and rebuild our name this upcoming season”.

Just like his coach and teammates, Frey was well-spoken and positive on Monday, contributing to an overall good Media Days showing for the Spartans.

Michigan State has the Big Ten’s second-lowest number of returning starters this season (nine total: four on offense, five on defense), only ahead of Michigan, with five total. This year, the team also features just nine scholarship seniors.

While Dantonio may not want to focus on last season, some of last season’s injuries and burning of redshirts may come to eventually help the 2017 Spartans.

“I don’t think there’s any question, last year we played nine true freshmen and we played another redshirt freshman, so we were young,” Dantonio said. “Some of those positions were positions of control, I would say — the Mike linebacker when Riley Bullough went down… our quarterback situation — Brian Lewerke was a redshirt freshman as well. Those were very, very critical positions that you needed to have guys with more experience. Now, those individuals have gotten experience even though they’re still young. I compare this very much to our 2013 season in a lot of ways.”

Lofty comparisons to the Connor Cook-led Rose Bowl champions, but the similarities are there. MSU fans would welcome a season anywhere near that of 2013.

Due to a number of factors, the 2016 edition of the Spartans severely lacked chemistry on and off the field. To make sure this does not happen again, the team is taking a unique approach to developing chemistry, participating in fun activities such as positional bowling tournaments.

On a less light-hearted note, the locker room culture behind closed doors has also changed, according to the players. They all emphasized a change of tone. Players were even asked if there was a racial divide in the locker room last season.

“I don’t want to speak too much on that,” Gerald Holmes said, “but whatever it was, I definitely do not see that now.”

In terms of establishing an on-field chemistry, there is good reason for MSU fans to be optimistic. As seen during the spring game, Brian Lewerke is developing a good rapport with his wide receivers and has a great opportunity to fully take the reigns of the offense. Meanwhile, the defense will look to return to the glory days of the early 2010’s..

This team will only go as far as its leaders do. And leadership was the common theme throughout Media Days, all four MSU representatives talking in-depth about how it has changed. With their youth, with their disappointing 2016 and with their offseason, if this team doesn’t have the correct leaders in place, another sub-.500 record could be on the horizon.

Gerald Holmes was asked if that leadership was missing last season.

“Yeah, a lot was missing,” he said. “I like to be free, but people should understand who’s leading. I feel like also, too, guys need to feel comfortable. I feel like, in a way, people [weren’t] comfortable for the most part.”

Some fans forget that a majority of players, especially on this team, are still teenagers. Coaches can realistically only do so much, if the players don’t get along, it’s hard to completely change someone’s personality or beliefs, but appointing the right team captains is important.

Having several good players jockeying for a starting position is usually a good problem to have for a team, but last year, Michigan State’s use of their three-headed monster at running back seemingly defied that notion. There were several moments last season where a running back — most notably LJ Scott in the Michigan game — would have the proverbial “hot hand”, but would be sat down in favor of other options. This was a common point of criticism among MSU fans last season, and for those critics, it may not be over.

Mark Dantonio is confident that a running back-by-committee approach is the answer moving forward. Although LJ Scott proved last season that he was worthy of bell-cow consideration, Gerald Holmes and Madre London will also get their fair share of carries. While all three are talented in their own ways and have shown separate flashes of potential, this could prove to be a risky move.

“I believe Coach D and the coaches will do what they need to do to go out and win,” Gerald Holmes said. “It’s a fun situation and it’s a little hard on us because we’re like ‘I can do the same thing that guy’s doing,’ but it’s also fun because you can play around with it”.

Mark Dantonio settled some of the quarterback controversy before heading into camp. While he did not give redshirt sophomore Brian Lewerke the job, Lewerke is the play caller to beat in August.

“We’ve got four good quarterbacks,” Dantonio said. “Four guys that are big, four guys that have Big Ten abilities. I think a lot is how they come through camp and remain healthy, those type of things. I’ve been impressed with all of them at one point in time. But, right now, I think Brian Lewerke… I think is a little bit of a cut above and we’re looking forward to his progress.”

He played well as a redshirt freshman (381 yards on 31-for-57 passing attempts, two touchdowns, one interception, 21 rushing attempts for 149 yards, and a 118.6 quarterback rating in four games) before breaking his leg against Michigan. After last season, Dantonio admitted that Lewerke probably would have started the final four games if his injury had not occurred.

Last year, there was also supposed to be one quarterback (Tyler O’Connor) to be “the guy,” but that did not hold true less than five games into the season. A young, talented quarterback with leadership ability is something this inexperienced team, looking to reshape their national perception, desperately needs.

Camp starts for all schools Monday, July 31. The annual “Meet the Spartans” event will be August 23 at Spartan Stadium. The Big Ten football season begins August 31, with Michigan State’s season starting on September 2 against Bowling Green. Follow @WDBM_Sports on Twitter and stay tuned to Impact89fm.org/sports to remain up-to-date on everything MSU and Big Ten football.