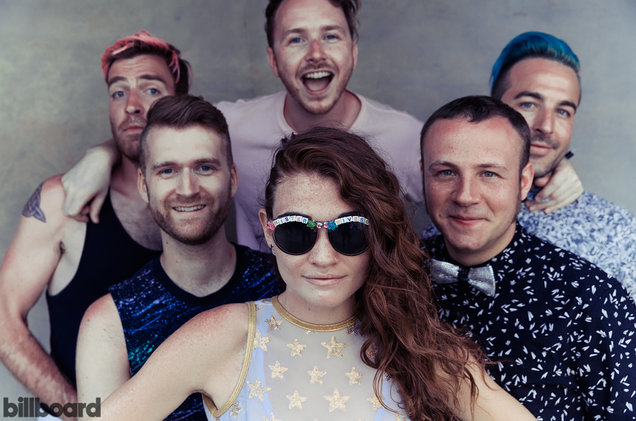 Pop without the fat. Catchy but still gritty.

New York band MisterWives are the perfect blend of dancehall-rock and indie-pop. Directed by frontwoman Mandy Lee, a graduate of LaGuardia Arts School, the band brings together a strong female lead with catchy, eclectic music that is equal parts Top 40 and DIY/independent.

Forming in 2012, the five members found each other by a mere accident. Lee initially met Will Hehir (bass) and Etienne Bowler (percussion) in New York City. Hehir and Lee became roommates and the three started jamming soon after. The trio later added Marc Campbell (guitar) and Jesse Blum (multi-instrumentalist), both of whom played with Bowler in an 80s cover band.
How they came up with the name “Misterwives”
The name Misterwives is a play on the Morman term “sister wife,” which refers to multiple woman who choosing to elope to a single man. Lee told Interview Magazine back in 2013, the group believes their bond is similar to the bond of marriage. So, Hehir, Bowler, Campbell and Blum all “got married” to Lee and bam! You have the wild group that is Misterwives.
The Band’s History
Shortly after the group started seriously playing together they were accepted a deal with Photo Finish Records and began recording their debut EP, Reflections. The group took the indie-pop world by storm with their music, garnering quite the reputation after touring with Twenty One Pilots.

A slew of initial tours passed before Lee and her misterwives began work on their debut album, Our Own House, in 2015. Without fully knowing it, Our Own House, propelled the group into the spotlight; they were on their way to being a household name. The success of that album also landed them a handful of well-known summer festival dates — Lollapalooza, Hangout Fest and Austin City Limits in 2015, and Bonaroo and Governors Ball this past year.

As the band continued into 2016, they embarked on yet another tour to perform their debut album. Just when it seemed the band had become musically-stagnant, they graced us with a beautiful cover of Chance the Rapper’s “Same Drug.”

How are they live?
Mandy Lee is very capable of making the biggest of crowds feel intimate and close. MisterWives shows are personal as well as technically flawless, everything from the wide sweeping vocals to tight instrumentation translates without a hitch. The crowd feeds off the energy, turning any venue to a dance party including saxophones and confetti.

What’s next for them?
Misterwives has been extrmely active so far this year, touring with Panic! At The Disco for three months and using social media to hint at the release of new singles and their album drop date. The band’s first single, “Machine,” showcased their capability to craft a more-improved, refined pop track. Two other singles — “Oh Love” and “Drummer Boy” — preceeded the album’s release. Connect the Dots, was released on May 19. Currently, Lee and the band are touring with what they call the “MisterWives Band Camp Tour,” making stops across the country until the end of June.

Catch our Impact Presents show with headliner MisterWives June 23 at The Crofoot.