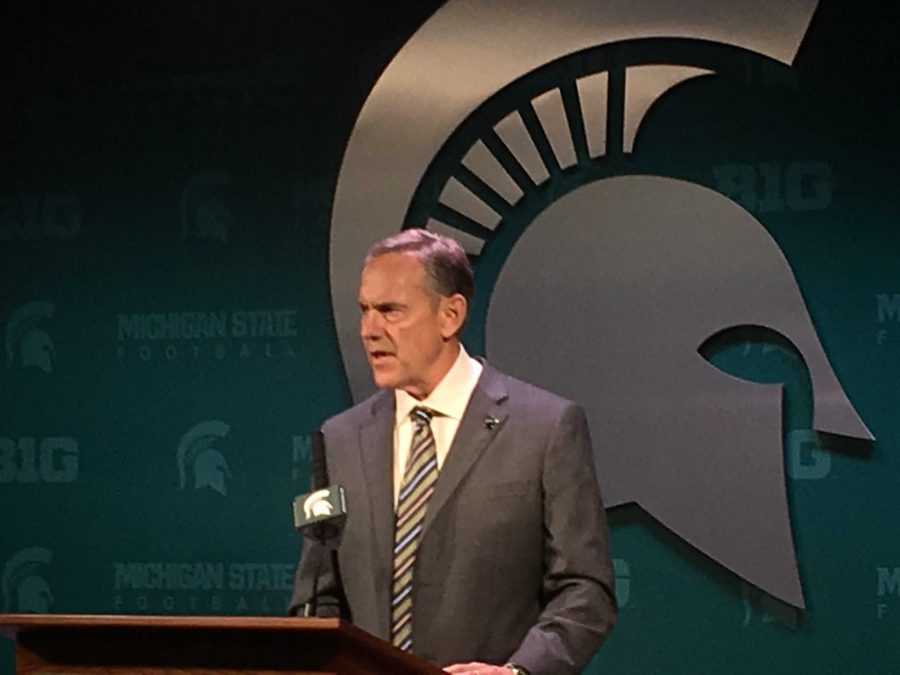 Out of his 30-plus minute press conference on Tuesday, those were the two words from Mark Dantonio that echoed loudest off the walls of the Tom and Lupe Izzo Family Media Center, said with the same gravity and tone as if to a player on the field.

For the first time since the spring game, Dantonio addressed the media to talk solely about the investigation. He was not alone in this regard, as athletic director Mark Hollis kicked things off with opening remarks of his own.

“The charges announced today do not reflect my values or the culture of our university,” Hollis said.

Hollis continued further with his remarks that reflect the ire of many around the football program. He referenced the 2016 season and the struggles both on and off the field, saying that he did not expect that to continue. At the same time, Hollis demanded that student athletes need to be held accountable to the principles of respect and kindness.

Then Hollis got emotional, remarking that MSU was his home and he expects his home to be safe.
[su_pullquote align=”right”]“The charges announced today do not reflect my values or the culture of our university.” –Mark Hollis[/su_pullquote]
Hollis closed by saying, “I offer my deepest compassion to the young woman and her family. Sexual assault has no place on any campus.”

Dantonio echoed much of the same sentiment, saying that sexual assault had no place on MSU’s campus and that the standards of the program had not changed. Even so, the 11th-year head coach said the situation has “affected the program from top to bottom.”

The decision to remove the individuals immediately from the program was Dantonio’s and his alone. This was done primarily because the players failed to grasp the “numerous amount of education” that was given to them on the topic of sexual assault. In fact, according to Dantonio, one week before the “episode” took place, the players were again briefed by the university’s Title IX coordinator on a sexual assault case elsewhere in the country.

“The education, I felt, was there,” Dantonio said. “They compromised themselves by getting involved in such a situation.”

It’s ironic that individuals of the most talented recruiting class Dantonio has ever had would give the program such a black eye.

Curtis Blackwell, former MSU recruiting coordinator, was a large part of that 2016 class. His contract was not renewed earlier this month and is no longer with the program. Dantonio said the decision to remove Blackwell was his and had to do with “philosophical differences” that were unrelated to the investigation.

Dantonio was quick to dispel that notion, saying that there are still plenty of good people on his football team, and that this situation is one in which the core values of the program need to be reaffirmed.

“Sometimes it takes a crisis to bring people back to a point,” Dantonio said.

The 3-9 finish last season, the loss of several players due to transfers and the sexual assault investigations. It has been a rough nine months for Dantonio and Spartan football, there is no doubt about that.

But through it all, Dantonio never had any thoughts of quitting when the going got tough.

“I don’t think you walk away from problems,” Dantonio said. “You’re hired here to handle the problems.”

He affirmed that the situation has been very difficult for him, so much that Dantonio didn’t even want to talk about football because of the seriousness of the issue.

“I was hired here to do a job,” he said. “I believe the people that hired me have faith in me as a person to do right to the very best of my ability.”

Now, moving forward, comes the toughest challenge in Dantonio’s coaching career. He had Michigan State at the height of the college football world, the “top of the mountain,” after a Big Ten championship and College Football Playoff berth in 2015. In one fell swoop, the program has fallen like an avalanche rushing toward a valley.

The Spartans are not just fighting to get back in the win column. They are fighting a negative image that has been painted on them. This isn’t a systemic issue like at Baylor or a coaching issue like with Penn State. Michigan State can recover from this.

But to do so will take a tremendous commitment by players to hold themselves to a higher standard both on and off the field. It will take an extraordinary amount of perseverance by the administration to promote a positive image and take steps to ensure that this situation never happens again. But most of all, it will take a tremendous amount of leadership by Mark Dantonio to lead his program back from the brink.

Michigan State may be in for its greatest challenge yet, bigger than gaining entry into the Big Ten, bigger than any Rose Bowl. The challenge of rebuilding.

“Not words, actions” as Hollis said, will be a good place to start.