We Watch It for the Music | Adventureland 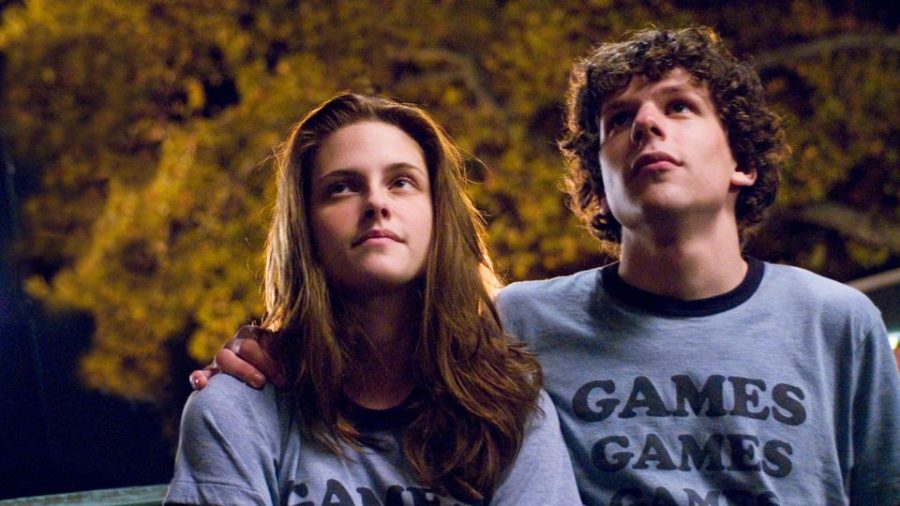 During high school, summertime equated to days spent in the sun and nights occupied with cruising down highways with your best friends. During college, though? You still may be at home, but time is money, baby, and you better believe that at least 30 hours out of your week are spent racking up dough at summer jobs. Minimum wage seasonal gigs aren’t always the worst, however- you end up sharing a mutual bond with others in the same boat, which is nearly the exact plot of Adventureland, the 2009 rom-com by Greg Mottola. When etched-out summer plans for recent Oberlin Comparative Literature graduate, James Brennan, fall through, he’s forced to live the ultimate dream- move back into his parents house in Pittsburgh and get a job at the dinky amusement park in his hometown. Feeling as if the world’s burning before his very eyes, he realizes soon enough that the summer may hold more than he thought. Most importantly though, he lives through a summer of epic music, being that it’s the prime year of 1987. All that’s in is feel-good grungy rock-and-roll, and frilly background tunes for summer montages are out.

This is the one song that plays twice during the film. Featured on the cassette that James gives Em—his love interested at the park— called “J’s Favorite Bummer Songs,” it first lulls in the background as she drives him home and he kisses her for the first time, and later plays after he storms away from her after what seems to be their downfall. Though Lou Reed and Co. were inactive during the 80s, this sleepy and breezy song still matches mood of James’ life in 1987 all too well- a little lonely, a little debatable, and a little endearing.

The most melancholy of all melancholy 80s songs, it’s fitting that this Crowded House classic plays when James and Em watch the Fourth of July fireworks together at the park before making out furiously, twice, while also being interrupted, twice. Unsure of what they are at this point in time, yet willingly going with the flow, you can tell that James’ feelings towards Em are loud and clear. If he could elope with her to Aruba this very instant, he probably would. The real question you ask yourself during this part of the movie though, is would she?

Any song by The Cure is naturally energy-inducing, so it’s quite a dichotomy that it plays in the background as James and Em make pot cookies. Feeling slightly hazy and wanting to blow off responsibilities, they take the park’s bumper cars for a spin. Like the song title suggests, James essentially feels like he’s living Heaven on Earth, being that something different’s come over him. Maybe it’s his newfound feelings for Em or maybe its the slight distraction from his uncertain reality, but for once, he’s actually careless and we’re all rooting for him.

Waiting for it to happen the entire movie, “Unsatisfied” feels like air into the lungs when it hums on as James finally travels to New York like he planned to before graduation. Having no plan in mind and being unable to pay for grad school, you hear the timidness in the first guitar riff like all the thoughts flooding his brain. Showing up at Em’s college apartment as an attempt to reconcile with her while he’s there, wholly cinematic in the pouring rain and such, the song feels ironic at the same time. Like you wished for the entirety of the film, James makes peace with having no direction yet, and the loose ends of it all are surprisingly satisfying.