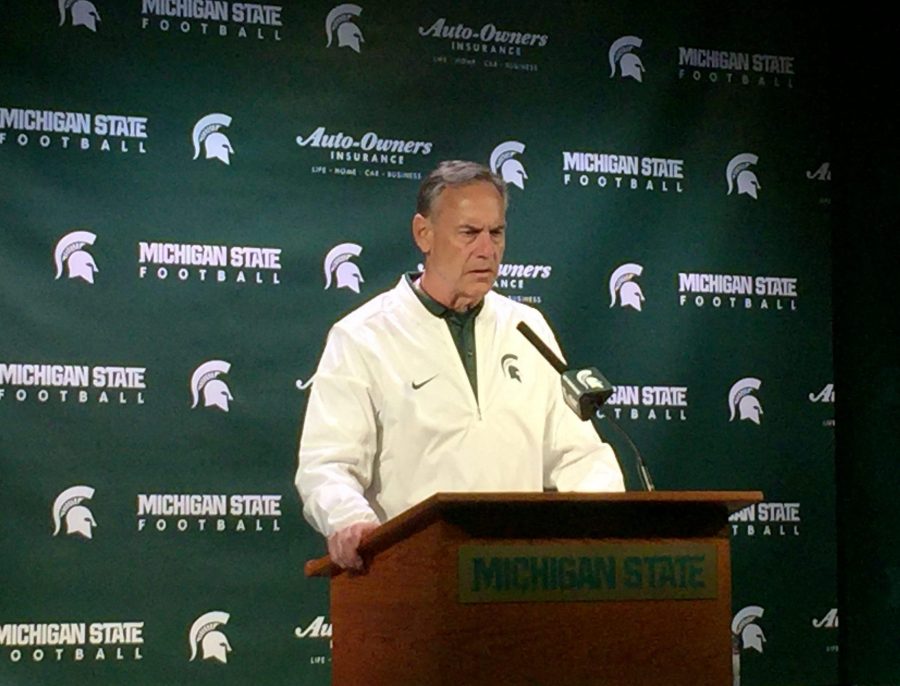 This a three-part series detailing the top 10 moments for Michigan State football since Mark Dantonio took over as coach in 2007.

If you’re a Michigan State football fan who wants to go back in time and forget about this past season, you’re not alone. Luckily, Impact Sports has you covered.

Over the past decade, MSU coach Mark Dantonio has put Spartan football on the map as a perennial powerhouse. With so many fantastic moments, it can be difficult to remember every good memory. So if you think it would be handy to have a single list describing the top 10 MSU football moments in the Dantonio era along with a video highlighting each of them, you’re in luck.

10. Holding Michigan to -48 rushing yards
Most defensive coordinators would agree that holding an offense under 50 rushing yards is a huge success. But how about under zero?

On Nov. 2, 2013 Michigan State made a joke of archrival Michigan, bullying them to a 29-6 victory. The Wolverines failed to score a single touchdown against arguably the best defense in the nation.

But the biggest story of the game was the abuse of Michigan quarterback Devin Gardner, who was sacked a whomping seven times. MSU attacked the Michigan quarterback through sheer force and authority issued by Spartan legends such as defensive end Shilique Calhoun and linebackers Denicos Allen and Max Bullough. The result was an output of minus-48 rushing yards, the worst in Michigan history.

The 2013 battle for Paul Bunyan symbolized a rare moment in MSU football history where it dominated the state of Michigan. From 2008 to 2015, the Spartans won seven out of eight contests against the Wolverines. Although things are different nowadays, 2013 serves as a reminder of the time when Michigan would enter East Lansing walking, but leave on crutches.

This was a pivotal game for Dantonio’s career, as he was 0-4 in bowl games heading into this contest on Jan. 2. In fact, MSU’s last bowl victory prior to 2012 was the Silicon Valley Bowl in 2001.

MSU star quarterback Kirk Cousins played his final game in a Spartan uniform, finishing with 300 yards. But the evenly matched game eventually became a battle of field goals in overtime between Dan Conroy of MSU and Blair Walsh of Georgia.

After a 28-yard Conroy field goal lifted the Spartans to a 33-30 lead in the third OT, White blocked Walsh’s 47-yard attempt to send the game into a fourth overtime, and MSU defeated the SEC opponent.

8. Michael Geiger Windmill
Michael Geiger wasn’t having the best year in 2015. His field goal percentage was an ugly 63.2 percent, a massive step down from his 93.8 percentage in 2013. Still, when it counted the most, he did not disappoint. His last-second field goal against Ohio State on Nov. 21, 2015 put the Spartans in the driver’s seat to win the Big Ten East and eventually go to the College Football Playoff.

This is arguably the gutsiest victory in the Dantonio era. Traveling to Columbus to play an undefeated Ohio State team is never easy. But the Spartans had to do it without their winningest quarterback of all time, Connor Cook, who was out with an injury.

Even crazier, the game was played during a rainstorm. It was cold, wet and windy. But the Spartans managed to cling on with power running from Gerald Holmes and LJ Scott, along with total control of the line of scrimmage.

Backup quarterback Tyler O’Connor led a four-minute drive starting in Ohio State territory, leading up to a last-second 41-yard field goal from Geiger, whose “windmill” celebration dance went viral. It was even borrowed by the Izzone as a free throw distraction the very next day at an MSU men’s basketball game.

7. Kirk Cousins Hail Mary over Wisconsin
To close out this week’s list, let’s go back to Oct. 22, 2011 to Michigan State’s 37-31 victory over the Wisconsin Badgers. The Spartans were placed with a key matchup against the BCS No. 6 team in the nation.

The back-and-forth game between future NFL starters Kirk Cousins and Russell Wilson looked to be heading into overtime. But Cousins had other plans. With four seconds remaining and the ball on Wisconsin’s 44-yard line, Cousins heaved the ball into the end zone.

The ball ricocheted twice before landing in the arms of Spartan wide receiver Keith Nichol just short of the goal line. From there, Nichol out-muscled the Wisconsin defense and placed the ball above the goal line for a touchdown. It was originally called short, but upon further review the officials determined that the ball broke the plane, giving MSU the victory.

One of the more unique parts of this story is that Nichol was originally a quarterback, who spent much of the previous year battling Cousins for the starting gig. Cousins eventually beat him out, and Nichol was converted to a receiver. This allowed the opportunity for them to work together to achieve legendary status in the Spartan community.

Next Week
Be sure to stay updated to see which moments make the cut for next week’s unveiling of No’s. 4-6.