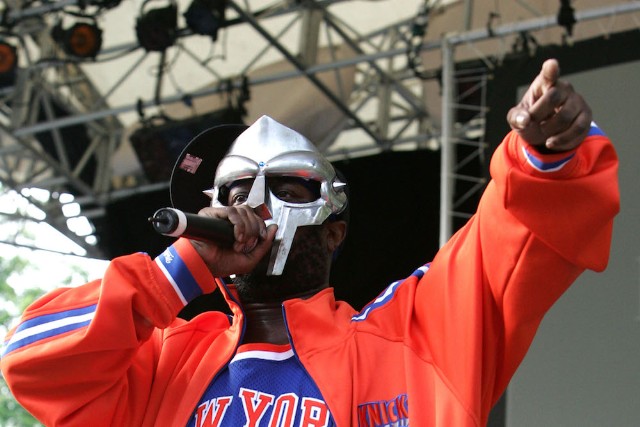 MF DOOM is one of the most unique, reclusive, and talented rappers of all time. King of the underground and master of the absurd, DOOM pairs nerdy beats and one-of-a-kind flows for songs that are funny and wrapped in their own world of wit and irony. Arguably the best lyricist alive in his prime, DOOM carried the torch of superhero hip-hop quite a ways back in the mid-2000s.

“Rapp Snitch Knishes” is one of the last few tracks on MM.. Food, DOOM’s concept album entirely about, you guessed it, food. The beat behind the song is one of the greatest ever made, featuring a sample from “Space Oddity” as covered by Dave Matthews. It’s catchy as hell and the guitar line is fabled in the rap world for its simple beauty. The beat is the perfect canvas for DOOM and Mr. Fantastik to paint their bizarro fantasies over.

Mr. Fantastik, by the way, is one of the most mysterious features in hip-hop history. He is only featured on a couple tracks that we know of. He could be an alter ego for a larger rapper that has contract obligations. He could be a producer first and foremost who only dabbles in the rap side. He could be tied up in much shadier business and doesn’t need the extra attention, but in any case, the hook on this track is hysterical and infinitely quotable, “Rap snitches, telling all their business/Sit in the court and be their own star witness.”

DOOM comes with the heat in his own verse, twisting words around the ironic culture of self-incrimination in hip-hop. The song ends with Fantastik and DOOM just hanging and throwing more shade at big talk rappers. The whole song has a very “home-cooked” atmosphere, like two great friends just messing around and recording a track. The instrumentals, mystery behind Mr. Fantastik, and DOOM’s delivery constitute “Rapp Snitch Knishes” as one the greatest hip-hop cuts ever.