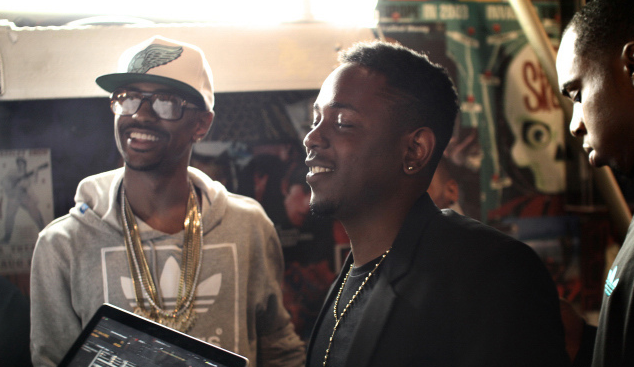 Last week’s release of the Mike Will Made-It-produced “Humble” seemed to mark a point of culmination in something other than the anticipation for Kendrick Lamar’s newest album. This follow- up to the week prior’s “The Heart Pt. 4” not only added some highly publicized steam to beef suspicions, but also assured the world that the first tirade was anything but an empty threat from the Compton kid. Kendrick is coming for someone’s head, and Twitter—amongst other outlets— is pointing to Good Music’s own Big Sean to respond. Despite collaborating as early as 2012 on Sean’s Detroit mixtape, the two have maintained a peculiar relationship, and now it appears that what began as healthy competition has evolved into a very subtle war on wax- with the world taking notice. Speculations say that tensions ignited as a result of Kendrick’s highly controversial, now infamous “Control” guest verse from back in 2013 that name-dropped Sean among a flurry of other rappers, and it appears the fire has grown ever since. Sean grew tired of refuting claim’s that he was “washed” on his own track and animosity grew between the two hungry artists.

Fast forward a few years: “Humble” finds Kendrick in “Back to Back” reminiscent form, doing everything from using Sean’s signature “lil’ b*tch” ad-lib throughout the track to allegedly taking a subliminal jab at his collaborative project with Jhené Aiko, Twenty88. The second verse bars “If I kill…it won’t be the alcohol / I’m the realest…after all” are being read by many as a direct reference to the “blame it on the alcohol or blame it on sativa” lyrics from their song “I Know.” The most damning evidence connecting Sean to this conflict came via Twitter shortly after the release of the “Humble” music video from Dave Free, president of Kendrick’s home Top Dawg Entertainment label.

This cryptic tweet is most likely in reference to Big Sean’s late 2016 offering “No More Interviews” that spoke explicitly on his relationship with Kid Cudi and ex-girlfriend Naya Rivera. While not immediately perceived by major media outlets as a shot at K-Dot, Sean Don’s references to a “frenemy” claiming to be the “savior of rap” with an “asthma attack” flow were surely put on notice by the TDE camp from the jump. One thing is for certain- this new development has the internet retracing their steps to see where this relationship turned sour.

As we grow dangerously close to Kendrick’s April 7th release date, the table is set for a David and Goliath battle of unheard of proportions. Those waiting for this beef to reach its now-inevitable climax can in the meantime reflect on what will likely be the very last time the world will find the two on the same track together- “Holy Key,” from DJ Khaled’s 2016 effort Major Key.