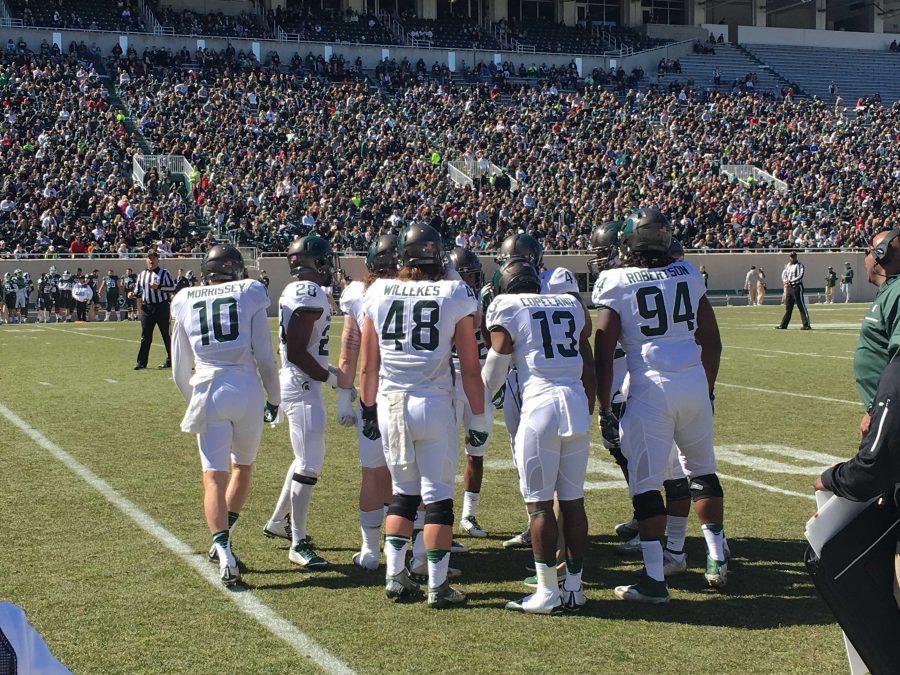 EAST LANSING, Mich. — After a disappointing 3-9 season last season, Michigan State looked eager to get off on the right foot for the 2017 season during their annual Green vs. White spring football game.

The game’s format was different than in years past. Previously, there was a Green team against . a White team, split evenly amongst the roster in a player draft. This year, the Green team was the offensive unit with the White squad being the defensive unit.

The scoring was also different than most people are accustomed to seeing. The offense scored like traditional games, six for a touchdown, with an extra point following the score. The defense, however, was awarded three points every five minutes of being on the field. They also received three points for every turnover they recorded.

It’s fair to assume the attendance for the game came nowhere near last year’s 51,000 who attended the 2016 spring game. The fans weren’t the only people shorthanded, however. Prior to the kickoff, there were 15 Spartans who did not dress for the game, for whatever undisclosed reasons.

Head coach Mark Dantonio offered no explanation for the players not in uniform and said he won’t talk about the injuries or suspensions.

Brian Lewerke got the start at quarterback for the Green team and looked sharp all game. Lewerke looked like he was going to be the guy going forward as the starter from last season, playing great up until the Michigan game, where he sustained a broken leg and missed the rest of the year.

With some questions at the quarterback position heading into the season, Dantonio showed confidence in his man under center following a an optimistic showing,

“I do think he’s much improved,” Dantonio said. “He’s going to continue to get better and better. Right now, he’s the guy.”

The redshirt sophomore showed great poise early on, establishing great chemistry early with rising sophomores Cam Chambers and Trishton Jackson, who quickly emerged as two of the premier receivers. The other rising sophomore receiver on the roster, Donnie Corley Jr., did not dress today.

Dantonio was impressed with what he saw from Jackson’s showing.

“He’s a great football player,” Dantonio said. “He can really run, he’s got great size and great hands. He’s got to get tougher, though.”

Aside from a 75-yard Madre London touchdown run in the second quarter, the ground game struggled for most of the first half. It picked up some steam late in the second half, thanks to Gerald Holmes. Holmes and London combined for all of the rushes for the Green team. LJ Scott, who’s coming off one of the only bright performances from last year, joined the list of players who did not dress.

Defensive ends Demetrius Cooper and Josh King did not dress, which allowed for walk-on sophomore Kenny Willekes to start in place of them. Willekes looked very active early on in stopping the run and disrupting the passing game.

Dantonio was impressed with how Willekes played in the game and this spring so far.

“We offered Kenny a scholarship last week as a walk-on,” Dantonio said. “His style reminds me greatly of Marcus Rush. He’s a guy who’s going to give you a million miles as a player.”

Spring games only show so much about a team, but this team should feel pleased with how it performed today. The Spartans look like they may have found a go-to duo with Lewerke and Jackson, and they should have three more-than-serviceable tailbacks when Scott returns to the lineup.

The Spartans have a lot to build on from this game, but also have plenty to work on if they want to avoid what they experienced last year. Four months from now, the Spartans will open up their 2017 campaign looking to avoid a season-opening loss to the Bowling Green Falcons on Sept. 2.