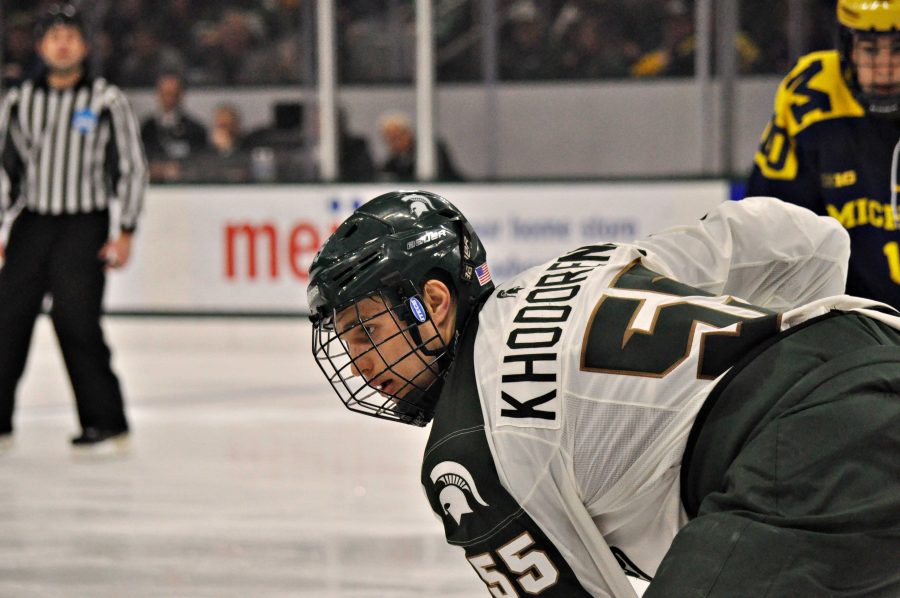 Michigan State must love playing in front of hostile crowds. How else do you explain that five of their seven wins this season have come away from East Lansing?

The Spartans earned a split on the road last weekend against No.13 Ohio State, winning Friday night 5-4 before losing on Saturday 5-3. The biggest standout for MSU this weekend was the play of two freshmen, Sam Saliba and Logan Lambdin, both of whom had multi-goal games.

Lambdin’s night was on Friday, where Michigan State started out with an offensive explosion, four goals in the first period. Lambdin started of the scoring for the Spartans at the 6:44 mark of the first period, he was followed by Thomas Ebbing, Cody Milan and Sam Saliba who neted a power-play goal late in the period.

Entering the second period down 4-0, the Buckeyes got on the board just over two minutes into the second thanks to Nick Schilkey’s 25th goal of the year. Lambdin would respond a few minutes later to make it 5-1.

Then on came the Ohio State. The Buckeyes benefited from two goals around the midpoint of the game, including a shorthanded goal by Mason Jobst, one of Ohio State’s leading scorers.

The Buckeyes would get one more late in the third period, but the Spartans held firm and walked away with a hard fought 5-4 win, their seventh win of the season and third in the Big Ten.

Saturday night’s game was a bit more even handed, at least from a scoring perspective. Jobst and Saliba both traded power-play goals less than 40 seconds apart, Jobst’s coming at 12:05 of the first period and Saliba’s at 12:41. David Gust would net another power-play goal for OSU with a little under two and a half minutes to play in the first period to give the Buckeyes a 2-1 lead.

It was a similar story in the second period, this time with Michigan State starting things off. Freshman Patrick Khodorenko, taking advantage of a tripping call on OSU late in the first period, netted his seventh goal of the season to tie things back up at 2-2. Just over a minute later, Kevin Miller gave the Buckeyes their lead back at the 2:03 mark of the second. This OSU lead would only last 105 seconds as Sam Saliba tied the game up once again with his second of the game, third of the weekend.

The Buckeyes netted the eventual game-winning goal early in the third period and nothced an empty netter to seal a 5-3 victory and keep their NCAA tournament hopes alive, albeit barely.

But the biggest positives to take away from this weekend is the play of the freshmen, who accounted for six of MSU’s eight goals. If there is one thing for Spartan fans to look forward to next season, it’s the play of these young guns who are showing no quit in this team and are slowly maturing into solid collegiate hockey players.