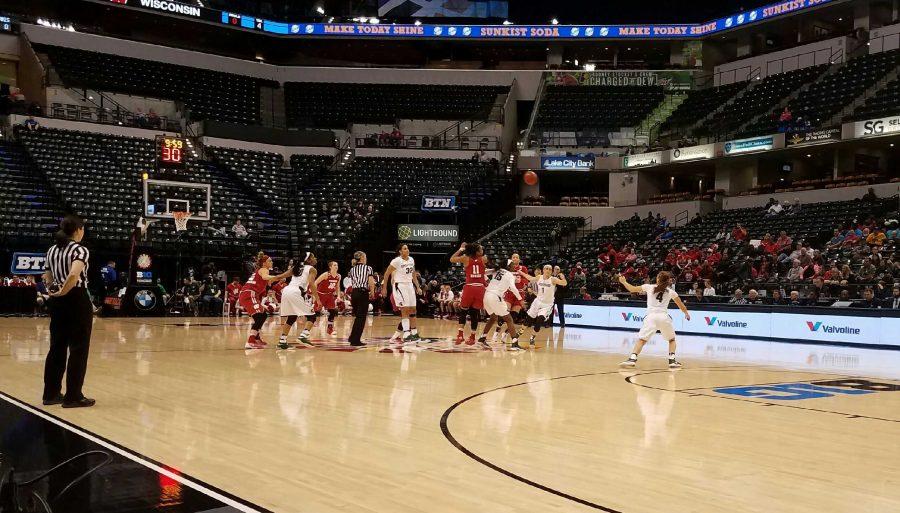 INDIANAPOLIS, Ind. — In a back-and-forth affair, Michigan State was able to pull away late and defeat the Wisconsin Badgers 70-63 on Thursday night at Bankers Life Fieldhouse.

“It was sort of a rusty go of it in the beginning,” Spartan coach Suzy Merchant said. “You know, I think sometimes when you wait around and have like a bye game it’s hard to get into a rhythm. Give Wisconsin a lot of credit. I thought they came out and were really aggressive on offense and we were really tentative. I thought the second half we made some changes and some adjustments and started to do some things that bothered them.”

With the win, the Spartans advance to the quarterfinals of the Big Ten Tournament for the 15th consecutive season. Their opponent? The Michigan Wolverines.

No. 6 seed MSU (20-10 overall, 9-7 B1G) trailed for most of the game, but senior guard Tori Jankoska willed the Spartans to victory, pouring in 22 points, collecting seven rebounds and dishing out two assists. She shot just 30 percent from beyond the arc, but she made up for it on the defensive end by getting four steals.

“Just kind of letting the game come to me,” Jankoska said when asked about how she fixed her slow start. “It wasn’t really anything that they were doing, but yeah, just letting it come.”

The unsung hero for the Spartans was graduate transfer forward Taya Reimer. She scored 12 points on 5-of-11 shooting and grabbed 12 rebounds, four of which were offensive.

“It was really positive for us to see her (Reimer) have a double-double,” Merchant said. “She’s been close a lot of times where she’s had seven, eight rebounds. But for her to kind of step up and keep the ball alive and finish down there was really important for us.”

Despite Reimer’s big day, the Spartans struggled to defend the inside as the No. 11 seed Badgers (9-22 overall, 3-13 B1G) scored 40 points in the paint on the night. Badger forward Avyanna Young scored 17 points and grabbed five rebounds. She could’ve done more damage had she not picked up her fourth foul with 9:17 to go in the fourth quarter.

“I was trying to beat the double team, but my teammates really put me in a good position to finish at the basket,” Young said.

The Spartans will have another tough test in the paint on Friday night with Wolverine forward Hallie Thome. On the season, Thome is averaging 15.2 points and 7.2 rebounds while shooting just under 65 percent from the field.

Turnovers also killed the Spartans early, as they had 11 in the first half. MSU was able to play smarter in the second half, finishing the game with 16 turnovers. Taking care of the ball is something the Spartans will need to be better at if they want to advance in the tournament.

The Spartans’ quarterfinal game against Michigan is set to start at approximately 9 p.m. on Big Ten Network.

“It will be a tough game,” Merchant said. “They’re very well-coached and they’ve got some really, really good players. And they run good stuff and they defend so it will be a battle.”