Spartans Hold On for Senior Day Victory over No. 16 Wisconsin 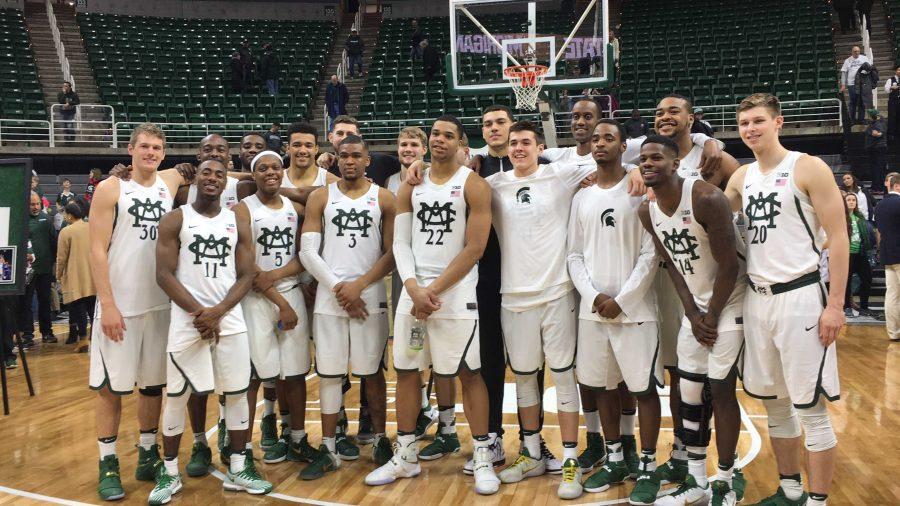 EAST LANSING, Mich. — Michigan State honored its three seniors Sunday evening, but it was the Spartans’ freshmen who led the way against the No. 16 Wisconsin Badgers, spearheading an 84-74 Spartan victory.

The Senior Day festivities began with a surprise for Eron Harris, whose mom sang the national anthem in front of a packed Breslin Center and a teary-eyed Harris.

The emotions didn’t quite carry over for the Spartans, who let up five quick points before getting on the scoreboard with a Nick Ward layup.

“They’re not an easy team to cover,” MSU coach Tom Izzo said. “They’re very physical and those guys have experience down on the block. Every time we’d double down, they’d hit a three. I think they did some things well. Give Greg (Gard) a lot of credit.”

Nick Ward took charge coming out of the locker room, scoring four quick points to boost the Spartans’ lead to five. Ward had 22 points and nine rebounds to lead the Spartans in both categories, but the freshman struggled with foul trouble, only playing 19 minutes. Still, his coach was very pleased with the effort.

“Nick is a load down there,” the 22nd year head coach said. “Nick’s going to be such a good player. He’s got such a long way to go and he is going to be such a good player, if that makes any sense at all. He’s gotten better, he’s more coachable, he understands things, and he can take it now. He understands that we all are in this together and that we are trying to make him better, and I just love the way that he responded.”

Ward, Miles Bridges and Josh Langford all found themselves in foul trouble during the second stanza. But the Spartans’ lead once again got up to double digits with 10:02 to play, thanks to some clutch minutes from the MSU bench. Matt McQuaid, Kyle Ahrens, Cassius Winston and Kenny Goins all hit big baskets while Ward and Bridges had to sit.

“I thought I needed to get Miles back in the game as soon as I took him out,” Izzo laughed about after the game. “Kyle Ahrens hit that big, fast-break three and Cassius pushed the ball so well. Don’t fool yourself, Tum Tum (Nairn Jr.) did some things well too… We had a lot of guys who did a lot of things.”

The Spartans held off several small runs by the Badgers by shooting unusually well from the free throw line. They completed 21-of-23 (91 percent) on the game and 18-of-19 in the second half. In contrast, the Badgers shot only 52 percent for the game.

The Badgers’ final hopes laid in the hands of big men Nigel Hayes and Ethan Happ. While they had their moments, they combined to shoot 13 of 32 on the day and 4 of 15 from the free throw line.

The signature moment of the night came with the Spartans celebrating with a 10 point lead late. The Spartan seniors, Alvin Ellis and Matt Van Dyk, continued a long-standing MSU tradition of kissing the logo at center court on Senior Day. But the highlight came when Izzo subbed Harris—wearing a brace—into the game to give his senior his final curtain call in front of the home crowd.

“Thank God for the officials and thank God Wisconsin was okay with it,” Izzo said. I think it was a big deal to Eron. Only me and (Dave) Pruder (Equipment Manager) knew about it and we made him dress. One of the great moments in my Michigan State career was that moment.”

The senior, who transferred from West Virginia and played last season and this season for the Spartans, received a raucous ovation from the Spartan fans, and he appreciated his head coach’s courtesy after the game.

“I’m thankful for Coach Izzo being such a genuine person and doing that for me,” Harris said, “letting me get in the game and kissing the Spartan head like the tradition, so I’m happy.”

Harris will still serve as a pseudo-assistant coach the rest of the year for Michigan State, leading the team vocally from the bench.

Michigan State now travels to Champaign, Ill. for a road tilt against Illinois on Wednesday. Tipoff is set for 9:00 p.m. EST.