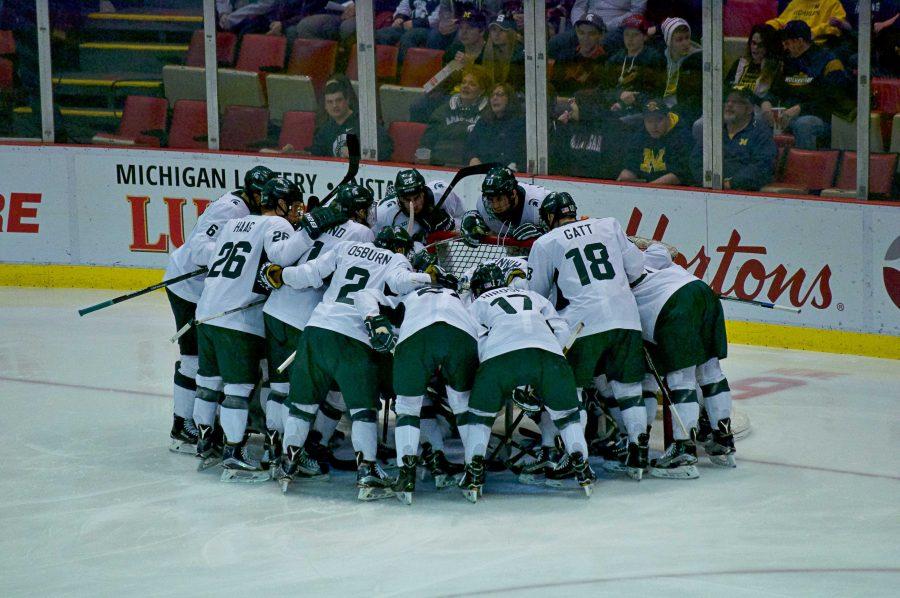 EAST LANSING, Mich. — The year 2017 has not been kind to Michigan State. Not only have the Spartans won just two games in the new year, they are also winless at Munn Ice Arena in Big Ten play. That trend continued Friday night, as No. 11 Penn State came out on top after a closely contested game, winning by a final score of 4-2.

“I think when we play our game, were a pretty good contender,” senior captain Joe Cox said. “I thought we gave a good push back in the second, but we can’t play like we did in the first and third and win a game. We just can’t.”

Penn State, who is desperately trying to climb back into the Big Ten standings after a sweep at the hands of No. 4 Minnesota last weekend, came out with a lot of physicality, laying big hit after big hit on MSU.

The Spartans were able to keep pace with the speedy Nittany Lions, matching that quickness themselves for the majority of the period. But the top offense in the nation wasn’t going to head into the first break without putting the puck in the back of the net.

Less than five minutes into the game, sophomore forward Alec Marsh tallied his fourth of the season to put Penn State on top.

Along with giving up the only goal of the period, the Spartans had their own problems getting the offense going. They were unable to register a shot on goal until there was 9:08 left to play in the first.

The Spartans also failed to convert on their only power play opportunity of the period. PSU forward Kris Myllari, already with an assist on the night, took a boarding penalty with under six minutes to play. The Spartan power play, operating at about 15 percent on the season, was only able to put one shot on net.

Cox opened the scoring in the second stanza just 18 seconds in. The senior, playing in his last home series in East Lansing, made a nice toe drag move around the Penn State defender and fired the puck top right on Penn State goaltender Peyton Jones, tying the score at one. The score would remain tied for the rest of the period.

Other than a few desperation saves by Spartan goaltender John Lethemon, the Nittany Lion offense simply did not look like themselves in the second period. They often sent passes into the skates of teammates and were unable to establish any kind of a forecheck.

Fortunately for them, the Spartans were unable to capitalize and take the lead. That happened in part because of Jones making a desperation save of his own on Logan Lambdin. The freshman had a wide open net, but Jones made the diving play across his crease to keep the score tied.

Michigan State was able to tap into the discombobulation of Penn State at about the halfway mark of the third period. Spartan freshman Taro Hirose made a backhanded pass to a wide open Rhett Holland in the slot. The alternate captain didn’t miss, sliding the puck past Jones to put the Spartans on top.

That lead, however, last exactly 13 seconds. Chase Berger took advantage of a scrum in front of the net, sending a loose puck past Lethemon to tie the score at two.

As the clock in the third and final period clicked under the five minute mark, yet another scrum took place in front of the Spartan net. A shot from Andrew Sturtz hit a body in front and was knocked up into the air. Eventually, Dylan Richard was able to get his stick on the puck and knock it in. After a review, the goal stood and Penn State regained the lead.

Michigan State had good chance to tie the game in the final minutes. Already on the man advantage, Anastos pulled Lethemon to give Michigan State the 6-on-4 advantage. The Spartans were again unable to convert as Penn State added an empty net goal with 30 seconds left to go on to win 4-2.

After the game, Anastos spoke about the decline in confidence he has seen from his team and how it has contributed to yet another disappointing season.

The two teams will return to action at 7 p.m. Saturday night at Munn Ice Arena as the Spartans will look to salvage the split on senior night.