Spartans fall just short in 3-2 loss to No. 14 Buckeyes 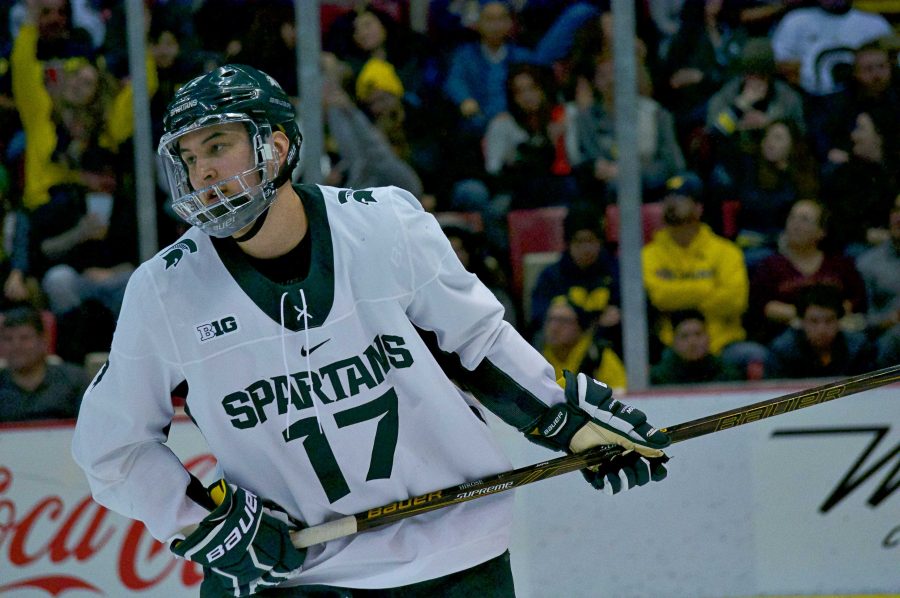 No. 14 Ohio State came into Munn Ice Arena on Friday night for the first leg of a back-to-back with Michigan State. Tonight, it was a 3-2 victory for the buckeyes despite a strong showing from the Spartans.

The Spartans came out of the gates flying on Friday. They spent the first several minutes of the game in the offensive zone. However, the Buckeyes still managed to net the game’s first goal.

The puck was bouncing around in front of Spartan goaltender John Lethemon for a significant amount of time, and was eventually buried by buckeye forward Dakota Joshua. After a lengthy review, it was ruled a good goal.

Just minutes later, Spartan forward Thomas Ebbing gained the puck at the bottom of the circle, spun around and fired a low shot off the goaltender’s pads that deflected right to a cutting Brennan Sanford, who was able to put it away for the Spartans first goal of the game. The goal was Sanford’s third on the season.

“I saw the puck and went to the net and banged it in,” Sanford said.

A bad turnover by the Spartans at their defensive blue line lead to the game’s third goal and gave the lead to the buckeyes once again. Upon making the play at the blue line, Buckeye forward Tanner Laczynski took the puck into their offensive zone, made a move and fired it past Lethemon.

With just 20 seconds remaining in the first period, the Spartans were able to once again equalize, this time it was senior forward Villiam Haag. The goal came when Haag received the puck at the faceoff circle and quickly rifled it at the Buckeye net. The shot snuck by Buckeye goaltender Christian Frey, hit off the post and bounced in. Jared Rosberg and Sanford were credited with the assist, and it was Sanford’s second point of the period.

The first period was an offensive showdown that could have easily been even higher scoring than 2-2. While the Spartans were the ones who got off to the quick start, the offensive pressure was essentially a push, with the Spartans having 16 shots compared to 14 from the Buckeyes.

Following the extremely offensive first period, both teams defenses got settled in and the second period went scoreless. The Spartans outshot the Badgers 13-7 for the period.

The lack of second period scoring was more than made up for in scrappiness. The two teams combined for 14 penalty minutes for the period and on several different occasions, there were serious scuffles behind the net after the whistle.

The Buckeyes opened the third period scoring on a shot from near the faceoff circle that was tipped in by sophomore forward John Wiitala. The goal came just under two minutes into the period.

In the third period, with four minutes remaining, the Spartans found a way to get the puck in the net, but were disappointed when it was reviewed and it was ruled that Sam Saliba touched the puck above the net, which is high sticking and results in the goal being wiped off the board.

“We were kind of skeptical on the bench because it looked kind of high, so we were saying if it does stay no goal, we have to stay on them,” senior captain Joe Cox said.

With just under two minutes remaining, the Buckeyes took a penalty, giving the Spartans the final minute and 47 seconds to try and even the game at three. The Spartans pulled their goalie to get the six-on-four advantage but never had any real chances to score.

“I thought that it was a pretty even game throughout, they made more plays than we did. Their tip went in and counted, our tip didn’t,” Anastos said.

The Spartans will again take on the Ohio State Buckeyes Saturday night at Munn Ice Arena for a 7:05 p.m. puck drop.