Jankoska surpasses 2,000 career points, but Spartans Fall to No. 3 Maryland 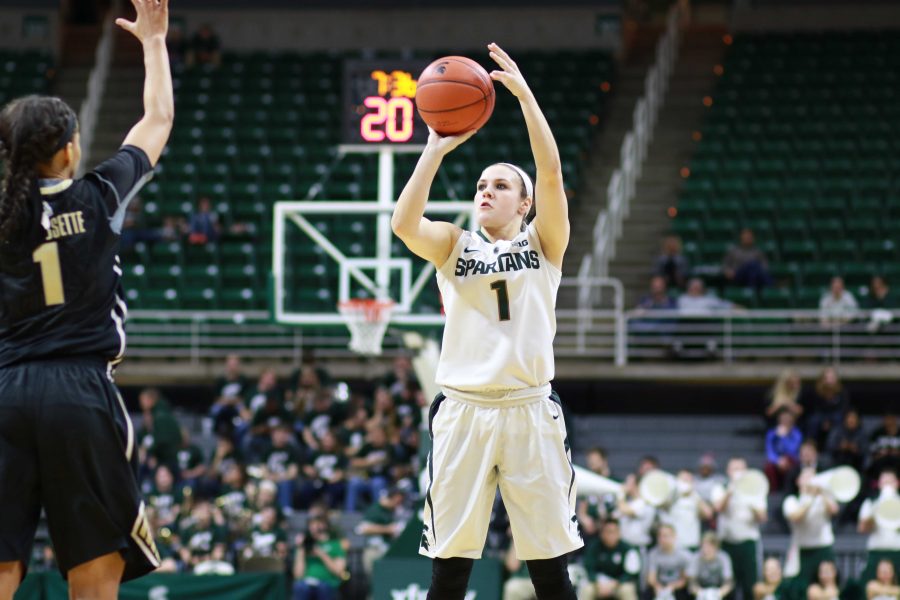 This was the way it felt in the Breslin Center for most of Sunday afternoon as Jones and No. 3 Maryland defeated Michigan State 89-72 in their annual Play4Kay game.

In the second quarter, Jones continued her excellent play as she had seven points in the quarter alone. The Spartans picked it up offensively in the quarter, improving their field goal percentage from 47 percent to 56 percent. Jankoska found her shot in the second scoring eight points. She also eclipsed the 2,000 career scoring mark in the quarter, becoming the first MSU women’s basketball player to do so.

“I figured she would score at least two points tonight, so I had a good chance. If she didn’t we would have lost by 50 points. It was an opportunity and a really cool thing tonight, and it’s a big deal,” Coach Suzy Merchant about her star guard reaching the 2,000 career points mark.

Despite Jankoska’s achievement, the Spartans still found themselves down 51-40 at the half.

In the final frame, the Spartans picked up the intensity on both ends of the floor, forcing turnovers and hitting shots. At one point the lead was cut to 12, but a turnover and a Jones basket and a foul stopped the momentum. Ultimately, the Terps held on and got the win.

For the Spartans, Jankoska finished with 23 points, five rebounds and five assists. Taya Reimer added 11 points and Branndais Agee chipped in with 16 points.

Although the Spartans took the loss, Jankoska was able to find some positives from the game.

“We played with energy. We stuck together the whole game. We did some good things. We moved the ball on offense. In the second half our defense was much better. We limited their offensive rebounds from what they normally get. Obviously we would rather win. There were definitely some good things about the game. We have to improve in some areas too” she said.

Following the loss, the Spartans fall to 16-9 overall, 6-6 in the Big Ten. They will look to bounce back against Minnesota on Feb. 16 at the Breslin.