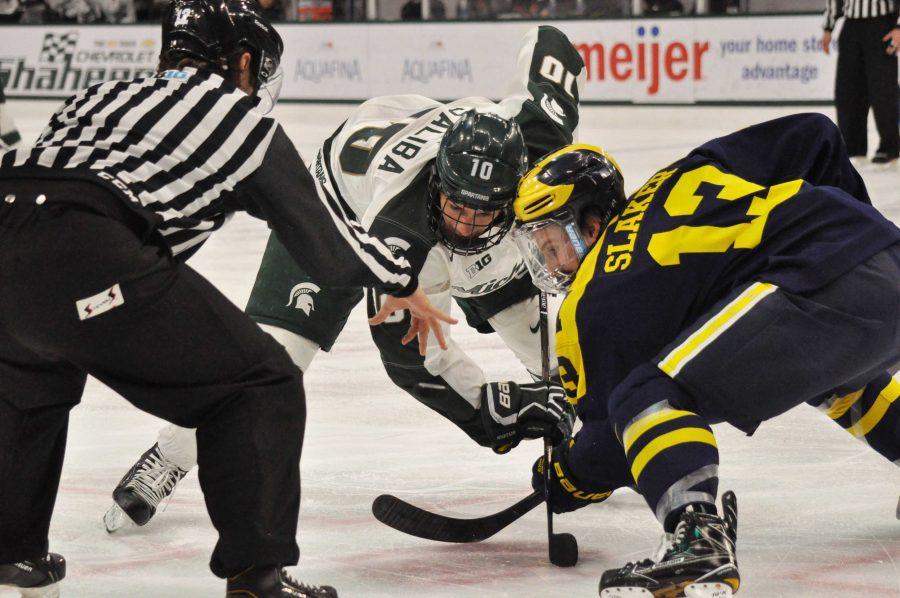 Just hours after the world learned about the passing of Detroit Red Wings and Tigers owner Mike Ilitch. In-state rivals Michigan and Michigan State took the ice for what could be the final time at the historic Joe Louis Arena.

For the second year in a row at the Duel in the D, and the fourth time in the last six games between these two teams, it would take an extra session to decide the game. The game ended in a 4-4 tie. But this time, it was the Wolverines getting the extra point and hoisting the Iron D trophy because of a shootout win.

The Spartans, fresh off being on the wrong end of a sweep the previous weekend against Wisconsin, came out with a bit of a jump in their step as the first period was mainly spent in the Michigan zone.

The heavy Spartan forecheck paid off just 36 seconds into the game when freshman Taro Hirose put MSU on the board. Hirose found some open ice just inside the left faceoff circle and let a one timer go that went over the shoulder of Wolverine goaltender Hayden Lavigne. Mason Appleton and Joe Cox assisted on Hirose’s fifth of the season and his first against the Wolverines.

Hirose has been one positive that coach Tom Anastos and the Spartans have been able to take away from the current season. The freshman ranks second on the team in points and leads with 12 assists.

It’s no secret that the Spartans are struggling in almost every facet of the game in the 2016-17 season. One of the areas of their game that has been long scrutinized is the power play. The Spartan power play ranks 43rd in the nation as they have only converted on 17 of their 116 chances before tonight. However, it was that same power play that helped double the Spartan lead in the first.

After penalties to Cutler Martin and Luke Martin, MSU went on a 5-on-3 man advantage. It didn’t take long for Sam Saliba to park himself all alone in front of the Wolverine net and wait for a teammate to find him. Eventually, Appleton got the puck to Saliba, who sent it past Lavigne to put MSU up 2-0 with 13:10 to play in the first.

But, like they have always done, a Red Berenson coached team didn’t go away quietly. Inside the final 10 minutes of the opening period, Michigan’s Jake Slaker, who leads the team in points with 18, sent a harmless shot at Ed Minney, one that the Spartan goaltender sent to the corner with ease. But the persistent Slaker chased his own rebound, threw the puck off the back of Minney and into the net.

Another large factor in the struggling Michigan State game this season has been consistency. Last weekend against Wisconsin, the Spartans failed to play a full 60-minute game and it cost them on both nights.

After riding a high for the first 15 minutes of the game, the Spartans seemingly fell apart in the last five minutes. The two teams were less than a minute away from heading into the locker room when a scrum formed in front of the Spartan net. The MSU defense failed to clear their respective zone and senior Max Shuart collected a loose puck and sent it past Minney to tie the game.

The Spartans were unable to escape with a lead.

The two teams traded goals in the second period with the Spartans striking first. This time, it was the fourth liner Chris Knudson stuffing home a rebound for his second of the season as well as his second against Michigan. Damian Chrcek and Connor Wood tallied assists on the go ahead goal.

The 59th ranked MSU power play went to work midway through the second period as senior Villiam Haag took an interference penalty on a pick play as his team entered the zone. Just seconds into the man advantage, the Wolverines seemingly took the lead.

With a goal already on the night, Slaker took another shot at John Lethemon, who replaced Minney to start the second stanza of play. Slaker’s shot was tipped by Dexter Dancs, but after review the refs ruled that Dancs’ stick was above the crossbar, negating the game tying goal.

The Wolverines would get that game tying goal they so desperately desired just two minutes later when senior captain Nolan De Jong sent his third of the season past Lethemon.

The two teams would head into the second break once again tied.

De Jong added another goal as he rifled a shot past Lethemon less than three minutes into the third period. De Jong took a pass from linemate Joseph Cecconi and sent it over the glove of the Spartan goaltender for his second of the night and fourth of the season.

Saliba added his second of the night in the closing minutes of regulation, but the goal would never have come to be if it wasn’t for Haag. The Swede was strong on the puck and made a nice move to keep it away from the Michigan defender trailing him. Haag was then able to send the puck across the crease to a wide open Saliba who tied up the game at four.

The two teams would play a riveting final minutes and overtime session, trading chances at each end and giving the 17,720 fans in attendance quite the show.

With no goals scored in overtime, it would be Slaker and Sam Piazza netting the shootout goals that took the Iron D trophy away from MSU and gave the Wolverines an extra point in the Big Ten Standings.

The two teams will meet again tomorrow night at Yost to close out the regular season series. Puck drop is scheduled for 7:30 p.m.