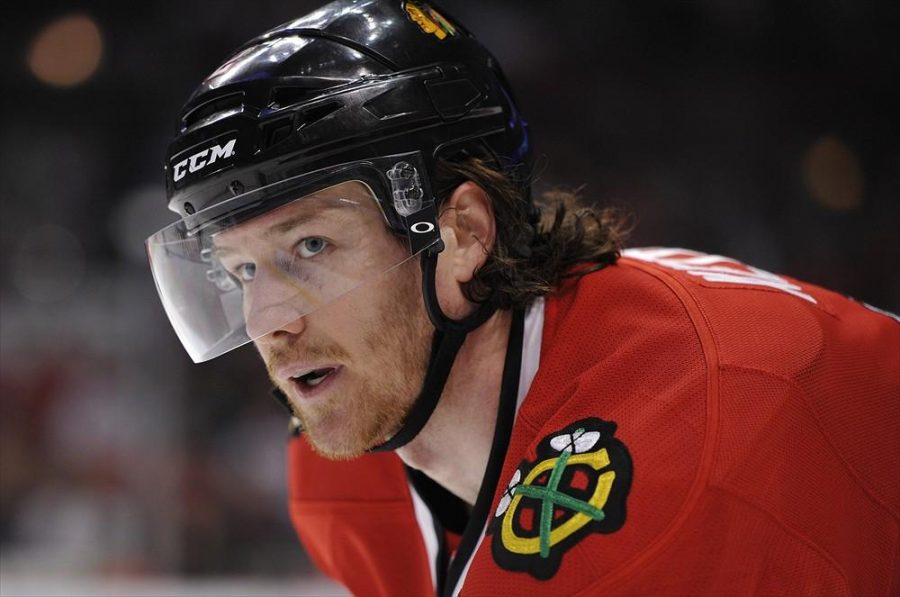 Duncan Keith played only one season at Michigan State, appearing in all 41 games of the 2001-02 season. He tallied three goals and 12 assists in route to earning an honorable mention for the 2002 CCHA all-rookie team before being drafted by the Chicago Blackhawks in the second round of the 2002 NHL Entry Draft.

After spending two years with the Norfolk Admirals of the AHL, Keith’s played his rookie season with the Blackhawks in 2005-06.  He made an immediate impact as a rookie, missing only one game during the whole season and leading the team in average time on ice with 23:26 per game.  Keith played every game the next two seasons and earned himself a spot on the Blackhawks’ top defensive pairing with Brent Seabrook to begin the 2007-08 season as well as his first All-Star Game selection in 2008.  Keith was named an alternate captain for the Blackhawks to begin the 2008-09 season and helped lead Chicago to the Western Conference Finals where they were eliminated by the Detroit Red Wings.

The 2009-10 season proved to be the most successful of Keith’s career.  In December, Keith signed the most lucrative contract in Blackhawks history, a 13-year, $72 million extension.  Later that month, he was selected to compete as a member of Team Canada at the 2010 Winter Olympics in Vancouver alongside teammates Seabrook and Jonathan Toews.  Canada went on to beat the United States in the gold medal game 3-2 in overtime to give Keith his first of two Olympic gold medals.

He tallied 14 goals and 55 assists with Chicago in 2009-10, giving him a career-high 69 points and ranking second among NHL defensemen that season.  The Blackhawks once again made an appearance in the conference finals, this time completing a 4-0 series sweep of the San Jose Sharks, a series that saw Keith lose seven teeth after being hit in the mouth with a puck in Game 4, to advance to their first Stanley Cup final since 1992.  The Blackhawks beat the Philadelphia Flyers in six games to win their first Stanley Cup since 1961 and Keith followed his team’s success with his first individual accolade when he won the James Norris Memorial Trophy as the NHL’s best defensemen for the 2010 season.

Following a couple low-success seasons due to salary cap restrictions (caused by the extensions of Keith and a few teammates), Keith won his second Stanley Cup with the Blackhawks in 2013, defeating the Boston Bruins in six games.  As a member of Team Canada once again at the 2014 Winter Olympics in Sochi, Keith won his second Olympic gold medal after Canada shut out Sweden 3-0 in the gold medal match.

After the Blackhawks were eliminated by the Los Angeles Kings in the Western Conference Finals in the 2014 season, Keith won his second Norris Trophy, finishing the season with six goals and 55 assists for a total of 61 points.

The Blackhawks found themselves in the Stanley Cup Finals yet again in 2015 against the Tampa Bay Lightning.  With a 3-2 series lead over the Lightning, Keith scored the Cup-winning goal in the second period that gave Chicago the lead and eventually their third Stanley Cup in six seasons.  Keith received the Conn Smythe Trophy as Most Valuable Player of the playoffs by unanimous decision, the first defenseman to win the award in eight years.  On Jan. 27, 2017, Keith was named on the NHL’s 100th Year Anniversary “100 Greatest NHL Players” list.

The Blackhawks are currently second place in the Western Conference with 71 points and are expected to qualify for the playoffs for the ninth straight year.