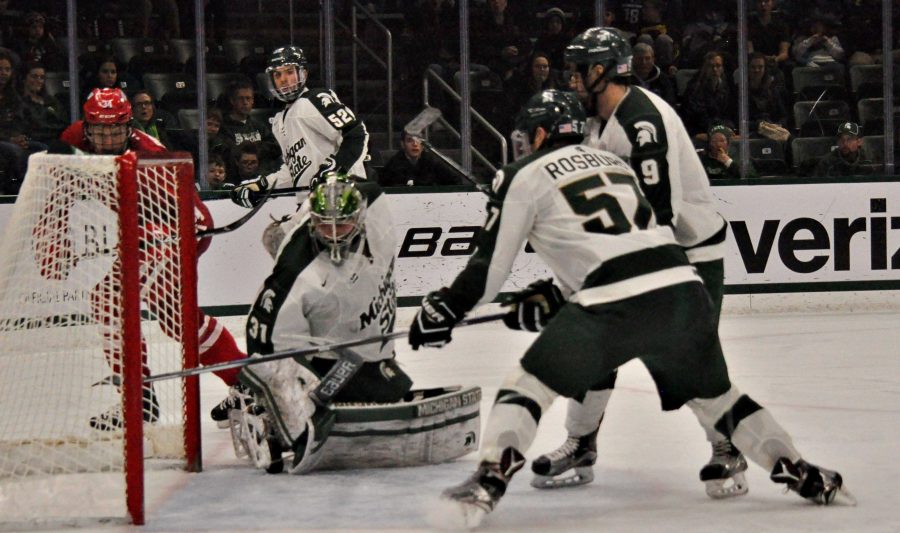 Following a thorough beating by the Badgers on Friday night, the Spartans bounced back with a gutty performance, but it still wasn’t enough as they fell just short Saturday night, losing 4-3 to No. 18 Wisconsin in overtime at Munn Ice Arena.

“You could obviously see how much better our game was today, how much more intense we were and how much more we stuck to our systems. We just have to find a way to play more like that every game,” senior captain Joe Cox said.

The Spartans were playing without freshman forward Taro Hirose, the team’s leader in assists, due to a suspension. He was ejected in the first period of Friday’s game versus Wisconsin for a kneeing penalty and after being reviewed by the Big Ten, it was decided he would be suspended for Saturday’s tilt as well.

With two minutes remaining in the first period, the Spartans got what they thought was the first goal of the game when a shot rifled from the blue line took a couple of odd bounces off some skates and eventually came to Brennan Sanford, who turned around and fired it low on an open goal. After the team celebrated, the referees met up and came to the conclusion that the goal was no good. The explanation was that when the puck was shot, it went underneath the belly of the Badger defender, and since there was a delayed penalty, the whistle was blown.

Just seconds after the Spartans goal was wiped off the board, the Badgers won a neutral zone faceoff that flew right to streaking Badgers forward Luke Kunin who easily converted the breakaway opportunity, giving the Badgers the game’s first official goal.

The Spartans got their first goal with 11:47 to go in the second period when Appleton cut hard at the goal and made a fantastic effort but ultimately the puck stopped right in front of the net. Defenseman Rhett Holland then came flying into the crease full steam ahead and essentially knocked it in the net. In the process, he knocked the net off and started a 30 second brawl behind the net. Wisconsin’s JD Greenway was eventually ejected from the game and Appleton was sent to the penalty box.

In what was maybe the goal of the season thus far for the Spartans, Cox made an impressive cutback right in front of the net, falling to his knees in the process. From his knees, he took a backhand shot while sliding across the net and beat Wisconsin goaltender Matt Jurusik in the bottom left corner.

“Somebody came at me and I just touched it through them and then it was on my back hand and I put it on the net and it went in,” Cox said

The goal was Cox’s fifth of the season and a much need contribution on the score sheet from the MSU upperclassman.

The second period was marked with many penalties, including 19 penalty minutes for the Badgers and eight for the Spartans. Both teams were undermanned for much of the period, but the Spartans ultimately were able to capitalize, scoring two goals.

The Badgers equalized with roughly 13 minutes to play in the third period when Wisconsin’s Cameron Hughes threw a backhand pass from the bottom of the circles right to the stick of Trent Frederic, who was sitting alone in front of the net and was able to bury the opportunity.

About five minutes after the Badgers tied the game, Wisconsin fired the puck into the Spartan zone and won the race to the puck. Wisconsin’s Corbin McGuire gathered the puck along the boards, came flying down the wing and shot right from the faceoff circle where it was tipped into the top corner by Cameron Hughes of the Badgers.

The Spartans managed to tie up the game with just one minute remaining in the third period on a perfect pass from the corner by freshman forward Patrick Khodorenko. The pass found its way through tons of traffic and landed right on the stick of Sanford who was camped out in front of the net and quickly put the puck in the back of the net for his second goal of the season.

Just one minutes into the five minute overtime period the Badgers scored the game clinching goal on a beautiful pass from behind the net by Seamus Malone who won the battle in the corner and passed it directly to the stick of Jake Linhart who ripped it into the bottom left corner.

A hard fought performance still wasn’t enough for the Spartans to overcome the Badgers in this matchup. Although the Spartans outplayed the Badgers, they still walked away with a defeat.

The Spartans will be taking on the Wolverines in their next match in what will be the final installment of the clubs meeting at Joe Louis Arena. The puck drops at 7:30 p.m. in Detroit.