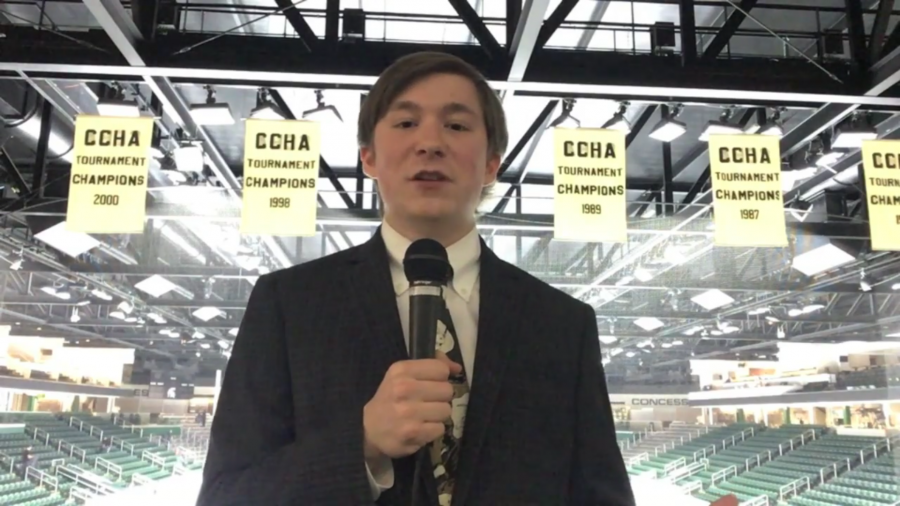 EAST LANSING, Mich — If anyone thought Michigan State was close to turning a corner, they were treated to a rude awakening on Friday night.

No. 18 Wisconsin took down the Spartans at Munn Ice Arena, finishing with a final score of 6-3.

“I think we just gave up way too many easy chances, I thought we stuck to our game plan pretty well except for the fact that we didn’t give our goalies a shot,” said Spartan captain Joe Cox. “The opportunities that [Wisconsin] had were point blank and we gave up too many easy, grade-A chances and that’s what got us.”

“We set em up on tees and they got to bomb away,” he said.

It was the Badgers who got things started five minutes into the first as Trent Frederic received a perfect pass in the slot and rifled a wrister past Ed Minney to make it 1-0 Wisconsin.

Three minutes later it was Badger captain Luke Kunin who made it 2-0. Kunin received a lead pass along the left boards, skated in all alone on Minney and easily beat him with a quick forehand-backhand deke.

Things didn’t get better for the Spartans midway through the first period as freshman Taro Hirose slew-footed Badger defenseman Tim Davison as he was skating up ice. Hirose’s hit subsequently drew a large crowed that took several minutes to break up. By the time things had settled down, Hirose was assessed a five-minute major and a game misconduct.

Davison did not return to the game.

Losing their leading freshman scorer was a critical blow for Michigan State, and presented the Spartans with a fair bit of adversity already down 2-0. Safe to say the Spartans didn’t handle it very well.

“That’s where guys have to learn to step up,” Anastos said.  “Its adversity, you’ve got to deal with it, it’s not going away, you’re not turning the game over, you’ve got to play.”

On the ensuing power play, Will Johnson extended the Badger lead to 3-0 as his shot from the left circle sneaked through several bodies to beat Minney.

After letting up three goals on 10 shots, Minney was replaced at the start of the second period by freshman John Lethemon.

After coming up empty on another powerplay, which was preceded by short scrum on the ice, Wisconsin made it 4-0 when Aidan Cavallini received a pass at the top of the crease in stride  and roofed a shot as Lethemon struggled to keep up with him.

The Spartans did get on the board in the second courtesy of Patrick Khodorenko who went down on a two-on-one with Logan Lambdin. Instead of passing, the freshmen elected to shoot and beat Badger goaltender Jack Berry. It was the first of two goals for the Freshman.

Three minutes later, Wisconsin regained their four goal lead. Cameron Hughes sent a pass from below the goal line to Ryan Wagner in front who blasted a one-timer into the top corner. Wagner’s shot was so fast that it went in and out of the net in the blink of an eye and it took the entire arena a full second to realize that the Badgers had scored.

The Badgers only managed four shots in the second period, but managed to score two goals.

Entering the third period, Anastos challenged his team with two objectives: play together and defend. The Spartans did that for the final ten minutes of regulation and managed two goals because of it. Khodorenko notched his second of the evening (6th of the season) on the rebound shot after a after a blast by Villiam Haag was blocked on it’s way to the goal.

Freshman Sam Saliba made it 5-3  a few minutes later after Brennan Sanford made a great play to fight off a defender in the left corner and sent a pass to Saliba who was all alone in the slot. Saliba took the pass in stride and in one motion fired it past the glove of Berry.

All of a sudden the Spartans had momentum and had a few chances to pull within one, but were unable to capitalise. An empty net goal by Frederic snuffed out any chance of a come back and the Spartans fell 6-3 despite outshooting Wisconsin 23-18.

It was the same problem as the last few years, the Spartans having trouble playing a full 60 minute game.

“We tend to lose focus at times and the other team will pop two or three in. I think that  we just need to stay focused and pay attention to the little details for a full 60 minutes,” Cox said.

For Anastos, who believes that his team is close to turning the corner, the fact that his team didn’t come out of the bye week and execute with focus troublesome.

“I just felt that we weren’t, we didn’t execute very well, that bothered me. So to me that’s a focus, that’s a readiness, and I don’t understand that. I don’t care that we had time off you should be hungry to play, eager to play,” Anastos said. “We’ve got to be better than that and were not in October, were in February.”

Judging from Anastos’ language, it appears that he is a bit perplexed that his players are having trouble motivating themselves. It is quite telling when a team can’t get themselves excited to play a top 20 conference opponent at home.