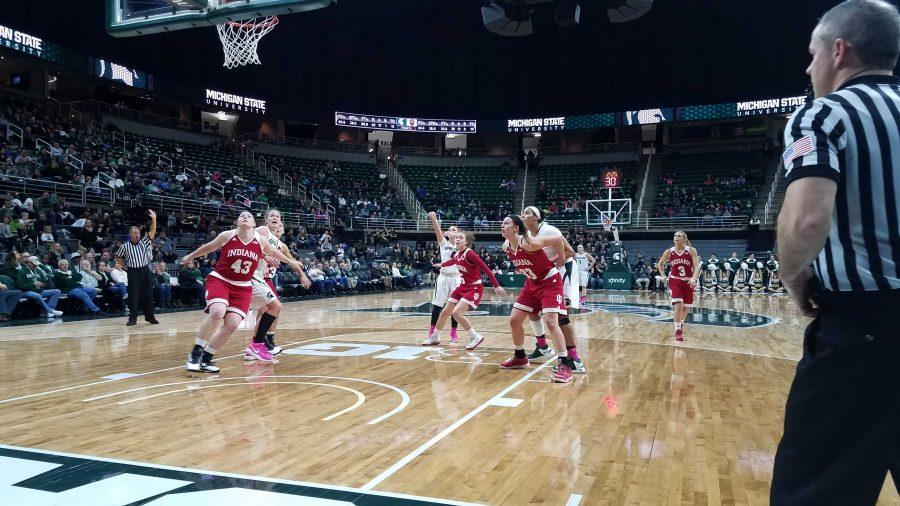 EAST LANSING, Mich. — On a cold Thursday evening in East Lansing, the Michigan State women’s basketball team took on Indiana  at the Breslin Center. In a matchup that saw both teams put their win streaks on the line, the Spartans walked out with a 69-60 win and pushed their win streak to three games.

Thus, both teams had to rely on other players to step up and score.  For the Spartans, the offense came from freshman guard Taryn McCutcheon who contributed six points on 2-of-4 shooting, and for Indiana, forward Amanda Cahill chipped in with seven points going 3-of-6 from the field. The half ended with Indiana leading 27-25.

The third quarter saw the Spartans come out aggressive on both ends of the floor, shooting 47 percent from the field while holding Indiana to just 30 percent. If there was an MVP of the quarter, it was Taya Reimer for the Spartans, who exploded for nine points after only having two in the entire first half. She was dominant on the inside, consistently finishing over Indiana’s Amanda Cahill, who had the better of this matchup in the first half.

The Hoosiers, however, showed some life in the final frame.  Led by guard Tyra Buss who contributed six points, the Hoosiers cut the lead to three, 63-60 late in the fourth quarter off the heels of a 9-2 run. Then with 42 seconds left on the clock, on a night where she shot 5-of-18 from the field, Jankoska hit a dagger three to seal the game for the Spartans, finishing with 15 points, 13 rebounds and seven assists.

Along with Jankoska, Reimer and McCutcheon also finished with 15 points, and guard Branndais Agee chipped in with 11 points. With the win, the Spartans improve their record to 10-0 in games when four or more players score in double figures.

For the Hoosiers, Cahill led the way with a game high 17 points and eight boards and Buss finished with 16 points of her own.