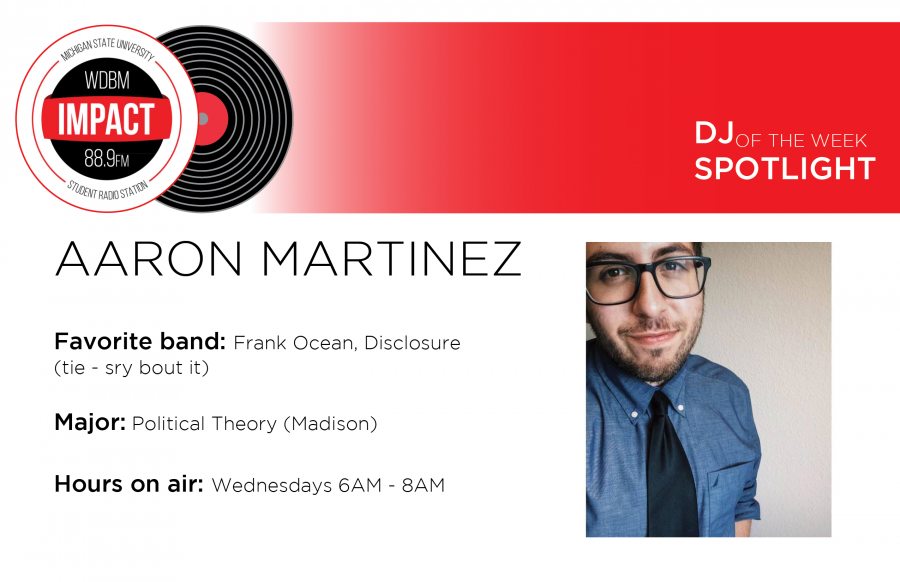 This week our DJ Spotlight is set on Aaron Martinez! When he’s not studying Political Theory at Michigan State University’s James Madison College, he’s jamming out in the studio every Wednesday morning from 6AM to 8AM. Make sure to wake up early, call 517-884-8989, and request songs from his favorites artists – Frank Ocean and Disclosure!

1. What made you decide to join Impact and become a DJ?
I first started in radio when I was in high school so the Impact seemed like the next logical step. My friend Marie first got me involved at the Impact and I’ve been having fun ever since! I love trying to find new ways to intersect the retro radio style with modern media, especially when it comes to storytelling.

2. What has been your best on air experience?
I love being a part of Impact events that take us into the public and gives people a chance to see how hands on we really are. We did a broadcast from Case Hall during my first year at the Impact and I’ve always thought that was one of the coolest things we’ve done. Doing those events is what makes people realize that we’re not just recorded robots playing music.

3. How do you think working in radio will affect your future career and life experience?
Radio requires a lot of planning. Planning what you’re going to talk about, how you’re going to talk about it, and always expecting the unexpected. I think almost every career relies on those skills at some level. Being able to talk to people who can’t talk back to you gives a lot of practice on being confident with those things.

4. What is your favorite part of the station?
The people, hands down. I owe every positive aspect of this station to the people who work day and night to make it a great place to be. The people here are who I can make John Cena jokes at the Rock around 4AM with. They’re the ones who make the Impact an incubator for creativity.

5. If you could play an artist non-stop on the air, which would it be?
I’d play a LOT of artists non-stop but I have to go out on a limb and say Thundercat because DAMN that dude is funky. I could also go with Flume and Disclosure – both are super saucy for airplay.

6. What is the best concert experience you have had? Why?
I went to Bonnaroo the year that Kanye West was headlining. After letting him yell at me for a good 30 minutes, I headed toward the bathrooms with a few of my friends while the rest of our group went to stake out a spot at the next show we were seeing that night. While I was waiting for my friends at the bathrooms, a HUGE wave of people came out of nowhere. I have no idea where all of these people came from but I ended up getting swept into a crowd and funneled through the festival with my phone hanging on at 1% until it died a minute later when I was trying to call my friends. I had to seriously follow the sound of the music to get to my friends at the Disclosure set. We didn’t end up finding my two friends at the bathrooms until after the set. When we found them they told us that they spent 30 minutes outside of the bathrooms picking up trash while they waited for me (or so they thought). All’s well that end well!

Our next DJ Spotlight of the Week will be out on 2/6.