Despite inexperience, MSU’s freshman are ready for “The Rivalry” 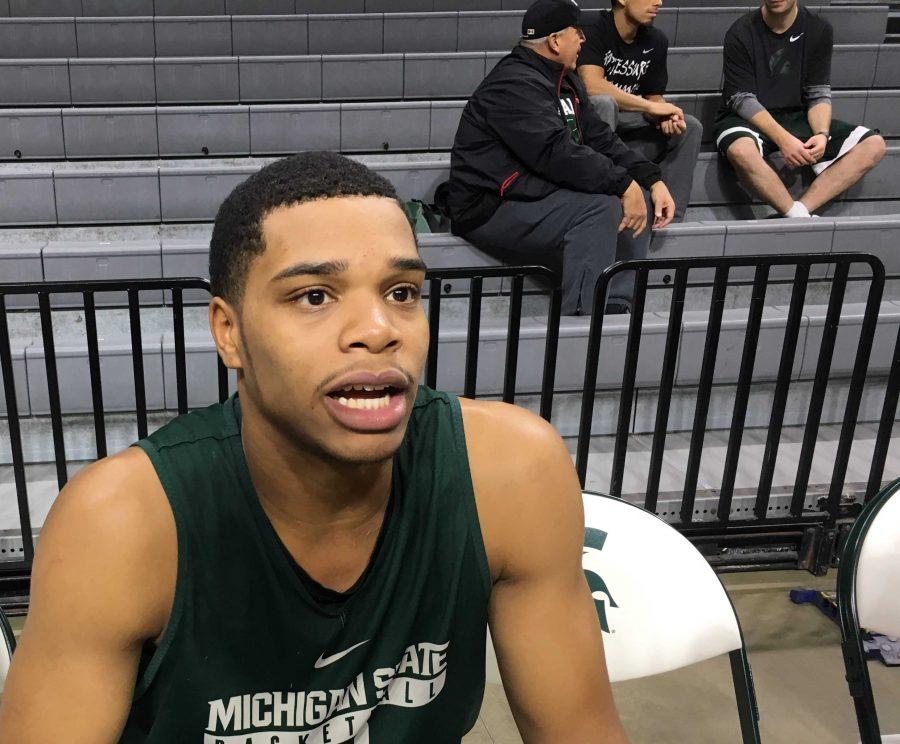 There won’t be any Matt Costello tongue wagging. There won’t be any Bryn Forbes three-pointers. And there won’t be any Denzel Valentine fast-break slams when Michigan State (12-9 OVR, 4-4 B1G) hosts in-state rival Michigan (14-7, 4-4 B1G) on Sunday afternoon (CBS, 1 p.m.). But there will be a plethora of inexperience for the Spartans—as well as hate, per usual.

Michigan State coach Tom Izzo has set the bar for the rivalry in his 22 years in East Lansing. He is 24-14 against the Wolverines in his career. That successful record doesn’t take away from his displeasure with the school 60 miles down the road.
[su_quote]”Do I respect John Beilein? Tremendously. Do I respect Michigan? Tremendously. Do I like them? Not one bit. I don’t like anything about Michigan and they don’t like anything about us, and that’s the way it should be.” –Tom Izzo, 2013[/su_quote]
Although players come and go, the hate for the maize and blue never dwindles in East Lansing.

And despite a freshman-heavy squad this season, anybody who dons the green and white understands why this rivalry is the way it is.

“It’s a great honor for me,” Flint, Mich. native Miles Bridges said after practice on Thursday. “It’s a blessing to be here, and to play in one of these games is just overwhelming. I’ve seen Mateen (Cleaves) and Mo Pete (Morris Peterson) post every year talking about “Go State,” so it’ll be a great experience for me.”

In 177 all-time meetings, UM leads the series 90-80 over MSU. But when the Flintstones were in town, they didn’t lose a single game to Michigan. Bridges knows the success of those players who paved the way for him to be where he is.

“If you’re from Flint, you automatically know the rivalry,” Izzo said. “It’s just ingrained in those kids. I’m sure [Bridges] has gotten calls from Mateen, Antonio, Peterson, everybody. It’s one of the cool things about [having a connection to the Flintstones.]”

His point guard, Cassius Winston, a Detroit native, echoed Bridges’ sentiments, as he grew up watching MSU/UM games and was exposed to the rivalry at an early age.

“It’s an honor [to be playing in this game],” said Winston, who was recruited by both Michigan State and Michigan. “Those are two top schools, and there’s a lot of good basketball being played by those organizations, those players. A lot of good players have played in this rivalry. And I get an opportunity to say that I did after Sunday and put my name up there with a lot of great players.”

Winston also added that he expects “The Izzone,” Michigan State’s student section, to improve upon their performance they had against No. 20 Purdue.

“They’re a big part of what we do,” he said. “They bring us up even when we’re down, even when we’re playing our best, whenever. They’re there to support us and give us that extra energy that we need.”

Joshua Langford is accustomed to big rivalries, being from Alabama.

“I can really relate to it because of the Alabama/Auburn rivalry back home,” Langford said. “I’ve experienced that and people can get a little crazy over there. I’m excited to be a part of it”

“Just being a part of Michigan State, you want to beat Michigan. Period,” he went on to say. “With us having 3 losses in a row, we have to get a win. It’s some extra incentive for us to give it our all. We’re all excited to be able to play.”

Nick Ward understands the Michigan dislike, growing up just outside of Columbus, Ohio.

“I don’t think they really have an idea of it either,” he said of his freshman counterparts. “I mean, they’ve seen it of course, [Miles and Cassius] are from here. But until you experience it, it’s just not the same.”

One of the leaders of this Spartan squad, Lourawls Tum Tum Nairn Jr., doesn’t expect the weight of the rivalry to affect the way the freshman foursome has been, and will continue to play. He has all the faith in the world that the youngsters will be up to the task.

“I expect all those guys to play really well,” Nairn Jr. said. “It’s a big game for us and we look at every game as a big game.”

In their last meeting, the Spartans beat the Wolverines 89-73 on Feb. 6 of last year. Michigan State has won four straight games in the rivalry. But Izzo knows that all goes out the window on Sunday afternoon.

“I think it’s a big rivalry as ever because both teams need a win,” said Izzo. “That gives more to the rivalry. If we were both 2-18, all kidding aside, it’d still be a rivalry, we all know that. And if we were both 20-2, it’d be a rivalry for a different reason. I think with the fact that we’re both hungry for a win, it makes it as good or bigger, and I think it’ll be a hell of a game.”