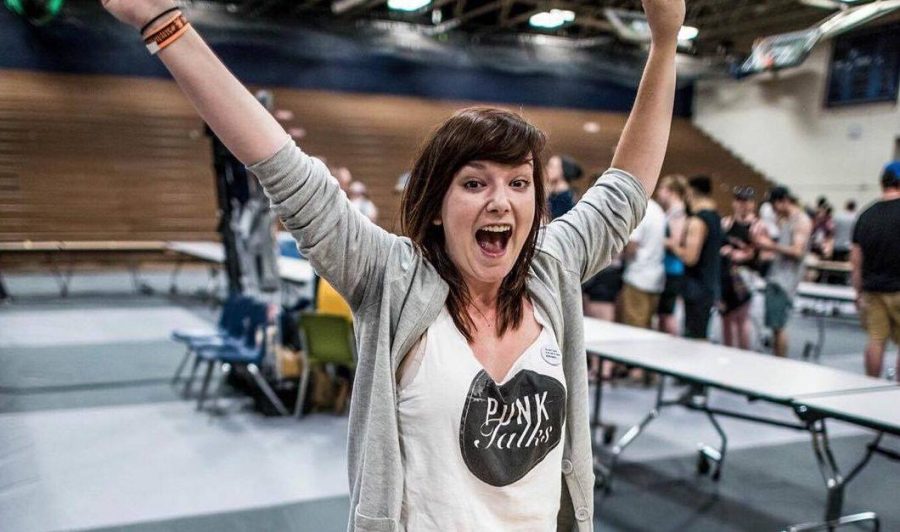 It’s easy to forget that our favorite musicians are human beings. We buy tickets to their shows and spend weeks prior chatting excitedly with our friends, dreaming up the perfect setlist and creating a mental play-by-play sequence of how our ideal nights will unfold. The night finally comes: we sing, we dance, we snap pictures on our phones and likely get elbowed by a wayward mosher or stagediver, but it’s normally all part of the fun. Then we go home. We rinse off the sweat of the night, re-watch the half minute video clips we shot and gush over the next couple of days about how cool it was to be in the same room as Julien Baker or Jordan Dreyer. But for many us, that’s where our thoughts end.

We don’t commonly think about the hundreds of miles musicians have to drive overnight to make it to tomorrow’s city by 4 p.m. load-in, the van they call home for back-to-back months or the potential mental pressures consequential of the touring lifestyle that aren’t necessarily evident within the few hours we spend with them on stage.

But those kinds of thoughts are precisely the ones Punk Talks founder Sheridan Allen could never shake. Even in the midst of a frustrating week of college finals during December 2014, the social work student found her mind drifting towards the well being of one of her favorite bands, Modern Baseball.

“I knew the members of Modern Baseball were all full-time students and I just remember thinking, because I was a full-time student also, that I’m so stressed out and school is the only thing I do!” Allen says. “Here are these people that are going through the same stuff that I am having to deal with and also going on tour over spring break. It was just wild to me. And I thought, ‘They must be so stressed. How do they deal with that?’”

As a long-time fan of the DIY music community, Allen was searching for a way to personally contribute to the scene.  Though she says her instrumental capabilities were less than promising, she realized she could still make an impact by pursuing her biggest passion – helping others.

“It kind of came to me, like hey, this could be a thing!“ Allen says. “There’s always talk about a direct correlation between creativity and mental health problems. So I did some research and found that there were no real mental health services available specifically for musicians. So I thought, let’s give a shot! And here we are.”

Now, two years later, Allen has transformed her passion into the creation of Punk Talks, an organization that provides free mental health services for musicians and music industry workers primarily involved with, but not limited to, the emo, punk and DIY music communities. When she’s not working her day job as a social worker for Child Protective Services in the Cincinnati area, Allen is hitting the road alongside artists like Sorority Noise and The Superweaks, sponsoring stages at music festivals and organizing benefit shows and album compilations to spread the word about mental health in the music world.

“We have all of these really successful bands who are awesome and are on tour constantly, but they’re making zero money. They’re doing full U.S. tours, breaking even and considering that successful,” Allen says. “If these bands are touring full time, they can’t really have steady jobs or consistent income, and they definitely don’t have health insurance. So not only are they subjected to this kind of grueling lifestyle on the road, but when you factor in a pre-existing condition, there’s a higher likelihood for them to experience negativity.”

Danny Samet, longtime merchandise manager for a lengthy list of artists including Two Door Cinema Club, Say Anything and Thrice, first met Allen at an Against Me! show in New York while Punk Talks was in its infant stages. Since then, the two have forged a valuable friendship that aids Samet in navigating through his rough days.

“Sheridan and Punk Talks have been a tremendous presence in my life, both as friends and as a steady voice for help when I’m not doing well on the road or at home,” Samet says. “A little known fact is that an astounding number of road crew members commit suicide every year due to mental health issues that they are unable to seek help for.  So Punk Talks is an incredible resource for people in music, particularly those that spend a good chunk of time on the road.”

According to a 2014 study conducted by the University of Sydney, we live in a time when musicians are two to seven times more likely to commit suicide compared to the general U.S. population. To combat such statistics, Allen says one of her main missions is to dismantle the stigmas surrounding seeking help for a mental illness, along with promoting therapy. However, she explains, the way people in the music scene approach mental health differs from those outside of the community, posing a unique situation when it comes to seeking help.

“I don’t think the stigma in music is the same stigma as everywhere else where people don’t want to admit that they have a problem. I think we’re fine with that. It’s the act of going to therapy and actually getting help and not remaining stagnant in misery,” Allen says. “I’m finding that a lot of people are dismissive of their own problems, and even if they’re having a really awful time, they’ll just say ‘Well, it’s not that bad. People have it worse than I do and I’ll get over it.’ But that’s not really how it works. Just because somebody else is experiencing something in a different way doesn’t devalue your experiences.”

James Cassar, a freelance music journalist and co-founder of independent record label Near Mint, began using Punk Talk’s services for support with anxiety and depression. He notes that it’s especially important to have confidants within the music community who understand the motivation and structure behind the scene.

“I was talking to my family when I was having mental health issues and they said, ‘Don’t you think it’s the music you listen to that makes you sad and bummed out?’” Cassar says. “While the emo and punk scene is emotive and has its fair share of mental anguish, it’s not designed to be a self-fulfilling prophecy for individuals who experience sadness or depression or anxiety. It’s an outlet.“

Not only does Punk Talks provide music professionals with a therapeutic avenue, Cassar says, but it also sends a message that resonates with fans, too.

“With the help of Punk Talks and outspoken music professionals like Cameron Boucher (Sorority Noise) and Brendan Lukens (Modern Baseball), our music scene is able to hear that people can get better, get help and find less shame in dealing with their problems in a constructive setting,” Cassar says. “Sheridan’s identity as a fan as well as an industry professional helps people who would like to be in the industry or get more involved in their local DIY community. It gives them hope that even if they are struggling, there is no barrier to entry. They can still function as an important part of their own scene.”

To instill that hope, Allen utilizes many a means to connect her clients with the assistance they need. Whether it’s being a shoulder to lean on for friends and fans through email and text, researching the best therapy options for musicians and professionals in their own areas, or referring touring musicians to the organization’s Chicago-based therapist for phone sessions, Allen continues to use her platform as a much needed resource.

Next, she says, she’ll be back in Michigan this May for Bled Fest (her cat, Franklin Cosmos, was recently named the festival’s “official mascot”) and will continue partnering with artists to bring Punk Talks across more state lines. Additionally, after her contract with CPS ends next summer, she plans to relocate to the East Coast to make Punk Talks accessible to an even wider audience.

After all, Allen says, her next move isn’t about where she takes Punk Talks, but where Punk Talks takes her.

“The fact that I was actually able to create something sustainable out of combining social work and music is literally my dream,” Allen says. “It’s unbelievable for me that I get the privilege to be a voice for mental health within our community. “