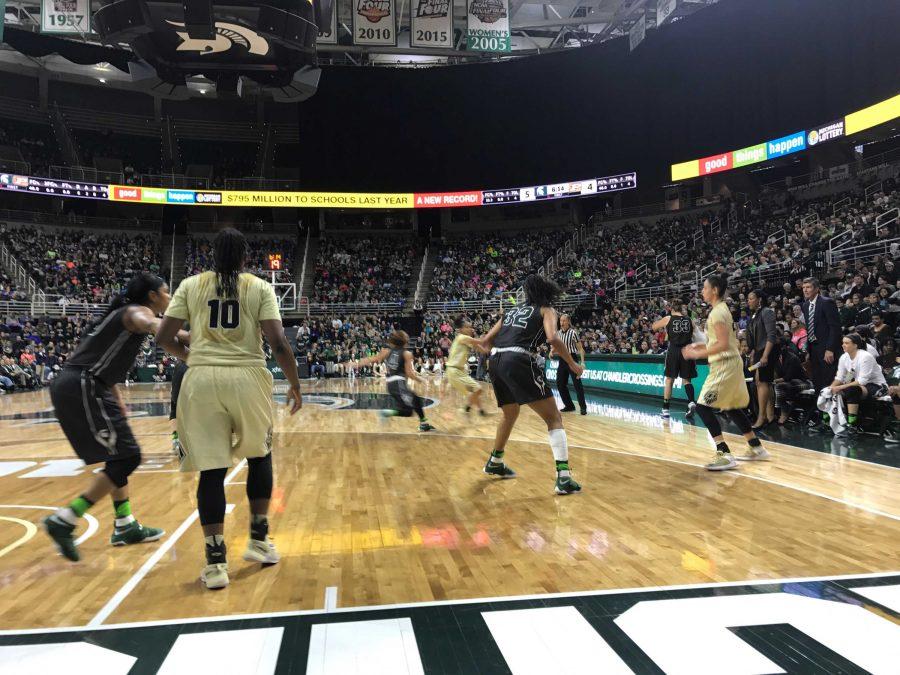 EAST LANSING, Mich.– Michigan State went head-to-head with Purdue in an intense women’s basketball game Sunday evening. The last time these teams saw each other on Jan. 4, Purdue won 66-54. Even though the Spartans knew they were going to have to fight harder, the Boilermakers did not plan to lose. Purdue won again, 76-66.

The Boilermakers came out with incredibly tough defense. The Spartans unable to score until three minutes into the quarter. After two charges on Purdue, and a few three-pointers from both teams, the score was 8-7 Spartans. After a short timeout, the Spartans took off at the end of the first quarter with two back-to-back assists from Tori Jankoska. Ashley Morrissette grabbed a steal and scored with ease.  After tough full-court pressure from Purdue, Michigan State kept the lead at 19-17.

In the second quarter, Purdue came out harder and faster. Ashley Morrissette made a jump shot and two free throws to obtain the lead for the Boilermakers, 21-19. Madrekia Cook subbed in the game and snagged three points for the Spartans, making immediate impact on the court. But Morissette’s offensive skill could not be stopped or contained by the Spartans. After back-and-forth scoring, the first half ended with a swift move and layup from Taya Reimer, cutting Purdue’s halftime lead to 44-33.

Morrissette led the scoring for Purdue with 17 points in the first half, while Jankoska led Michigan State with 11 points. The first half started with a hard driven mentality from the Spartans, but the momentum did not last throughout the whole half. The Boilermakers’ speed and offensive play gave them the ability to create a good lead. The Spartans failed to make crucial shots and had 19 turnovers, thus decreasing their chance of winning. The second half had to be better if Michigan State was going to stay in the game.

“We had too many turnovers against a zone,” Jankoska said. “In my opinion I feel like we should go man-to-man, and make sure you keep your person in front of you and if you don’t do your job you should come out.”

In the third quarter, the Spartans stepped up the intensity, particularly Branndais Agee. She made shots, got rebounds and kept the Spartans in the game. Michigan State players Jenna Allen, Cook and Agee fought tough calls and defense to get six more points to end the third quarter. On the other hand, the Boilermakers did not lose their lead, leaving the score at 56-50. Michigan State was doing a great job on offense, but could not stop Purdue’s scoring.
[su_pullquote align=”right”]“It’s not like we’re getting blown out, that’s the thing. Crunch time, we just need to stay together and just execute.”
–Branndais Agee[/su_pullquote]
Jankoska, McCutcheon and Agee hit three-pointers to kick off the last quarter, narrowing Purdue’s lead to 63-56. Purdue outran Michigan State in a couple fast breaks by Andreona Keys and Lamina Cooper. Reimer and Allen fought down in the key for tough rebounds, but Allen fouled out with two minutes left in the game. After controversial foul calls and accurate free throws from Purdue, the gap widened to 75-63. Agee didn’t let up and put up one more three-pointer before the game concluded at 76-66.

“Coming together especially when we hit adversity,” Agugua said. “Fighting through it together. Turnovers killed us, we had 19 turnovers. Our team really believes that we are better than how we’re playing.”

Agee stepped it up and pushed herself to make shots and produce plays. She scored 15 points for the Spartans (13-7 overall, 3-4 Big Ten).

“It’s not like we’re getting blown out, that’s the thing,” Agee said. “Crunch time, we just need to stay together and just execute.”

The Spartans will head to Madison, Wisconsin to play Wisconsin on Jan. 24. Tipoff is scheduled for 8:00 p.m.