Spartans Fail to Sweep Michigan, Lose in the Shootout 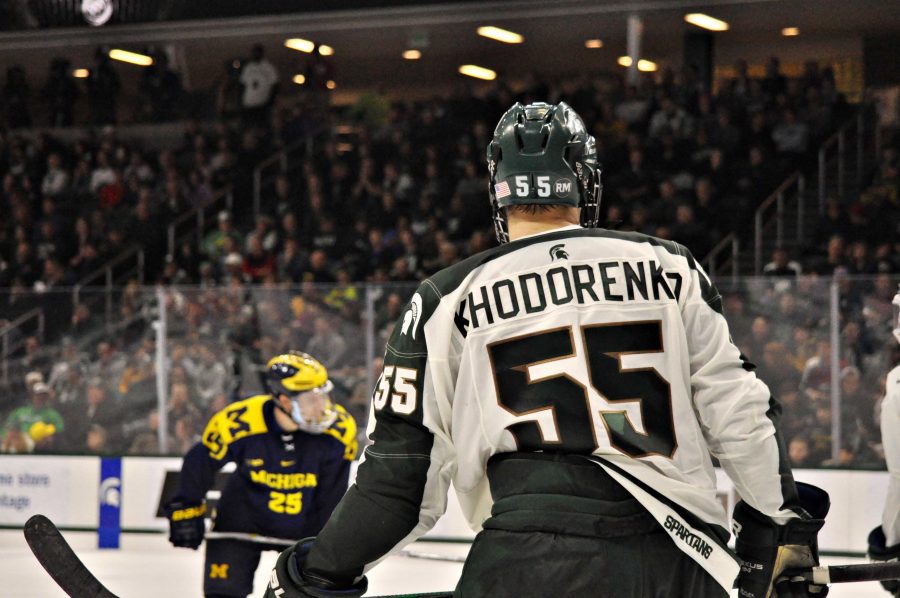 EAST LANSING, Mich. — It was an environment worthy of a rivalry game Saturday night. A packed Munn Arena filled with 6,556 fans witnessed Michigan State (5-15-2) battle the University of Michigan (8-12-2) in college hockey’s most played rivalry.

Though the game officially ended in a 2-2 tie, the Michigan fans left Munn happy and more importantly the Wolverines walked away with two points.

“Oh it was a great crowd,” said Michigan State coach Tom Anastos. “That’s why I hate having them leave without the right taste in their mouth.”

After getting blanked by the Spartans 3-0 in Ann Arbor on Friday, the Wolverines came out with a much more determined effort and were rewarded with an early power play as Spartan forward Villiam Haag was called for tripping.

The Spartans penalty kill, ranked 59th in the nation, actually helped the Michigan powerplay unit in check. But just as the penalty expired Michigan co-captain Nolan De Jong rifled a shot off the post and into the back of the net. De Jong’s third of the season secured an early 1-0 lead for the Wolverines.

The Spartans fought back viciously, and four minutes later a rebound in close found MSU freshman Dylan Pavelek who made no mistake in burying the puck past Michigan netminder Zach Nagelvoort to tie the game back up at 1-1.

“It was a great feeling, one of the more exciting goals I’ve had,” Pavelek said.

For the remainder of the first period, the Spartans were all over the Wolverines. By the time the period was over, MSU held a 9-4 shots advantage but the score is was still tied.

As the second period started, Michigan came out with a bit more jump in their step and dictated the play most of the evening. The Spartans did have several chances to take the lead, including a flurry of point-blank chances in front.

It was the Wolverines however who retook the lead as Michigan defenseman Sam Piazza sent a shot in on net that was tipped by UM forward Alex Kile to regain the lead for Michigan. However, Kile seemed to interfere with MSU netminder Ed Minney in playing the puck so the play went to video review.

After a lengthy review, the call on the ice was upheld because Minney’s glove was outside the crease when the contact occurred and was thus not goaltender interference, unlike in the NHL.

Because Minney’s glove was outside the crease when it made contact with Martin, it was considered incidental contact.

Despite two power plays in the period, Michigan State went into the locker room down 2-1 after two periods.

While the statistics may show that Michigan outplayed MSU in the third -UM outshot the Spartans 9-2 in the final period- it was the home team that came up with the big play.

After drawing a penalty midway through the period, the Spartans embarked on their fourth power play of the game. With 20 seconds left in the man-advantage, Spartan freshman Sam Saliba managed to corral a deflected puck and sent a backhander toward the goal from the high slot. The shot was tipped in mid-air by a streaking Patrick Khodorenko over the left shoulder of Nagelvoort and into the net.

“I saw Patty [Khodorenko] got deflected and it went in the air and I just tried to get it down as quick as possible and get it to the net,” said Saliba. “Patty did a great job to get there and tip it in.”

As the Spartans and their fans celebrated the power-play goal, the Wolverines adamantly claimed that Khodorenko’s stick was above the crossbar.

Once again the officials went to the monitor to review the goal. And again, after a lengthy review, the goal was upheld.

The Spartans and Wolverines fought feverishly for the game-winning goal during the final minutes of regulation. Fans of both both schools filling the arena with their respective chants, urging the teams onward.

By the end of regulation though, the rivals remained tied and headed to overtime.

Exactly 90 seconds into overtime, De Jong was assessed a tripping minor in behind his own net. Despite the man-advantage, momentum and the crowd noise, the Spartan power play unit came up empty. Though they had several good opportunities, they could not beat Nagelvoort.

Overtime ended with MSU outshooting Michigan 3-0 and 27-25 in total for the game. Both teams were awarded a point in the Big Ten standings, with a shootout deciding the final point.

Both shooters in the first round, Joe Cox for MSU and Alex Kile for Michigan, missed on their shots. Spartan Freshman Taro Hirose led off the second round with a nifty deke that beat Nagelvoort but not the crossbar.This was followed by a Will Lockwood shot that missed the net by a good two feet.

In the third and final round Saliba made a good move but missed the net on his attempt. This opened the door for UM sophomore Cooper Marody to win the game, which he did with a hard wrist-shot that beat Minney low on the left side.

The Spartans have yet to beat Michigan at home since March 8, 2014. Michigan State has now gone three straight seasons without beating the Wolverines in East Lansing, the first such streak since 1955-57.

It also marks an interesting trend where both teams have found a degree of success away from their home rink. Anastos says it has a lot to do with the increased consistency of college hockey teams.

“There’s so much parity, you know, especially in goaltending,” Anastos said. “Goaltending makes such a difference.”

The Spartans are now 1-1-1 in the season series with Michigan with the next matchup between the two schools coming at Joe Louis Arena in Detroit on February 10.

In the meantime though MSU has a bye week coming up before they host Wisconsin at Munn. The key now is to take that strong performance exhibited this past weekend and duplicate it on a more consistent level throughout the year.

“I would just say we’ve got to play hard, when we play hard we play our best,” Cox said. “Like I said we have the skill on this team it’s just a matter going to the hard places and putting in work.”

Despite the disappointing end to the weekend, the Spartans did take four points out of six possible, and played extremely well against their in-state rival. In some ways, this weekend saw Michigan State’s best performance of the season.

Time will only tell if it is a sign of a late season surge, or a positive outlier in a mostly forgettable season.