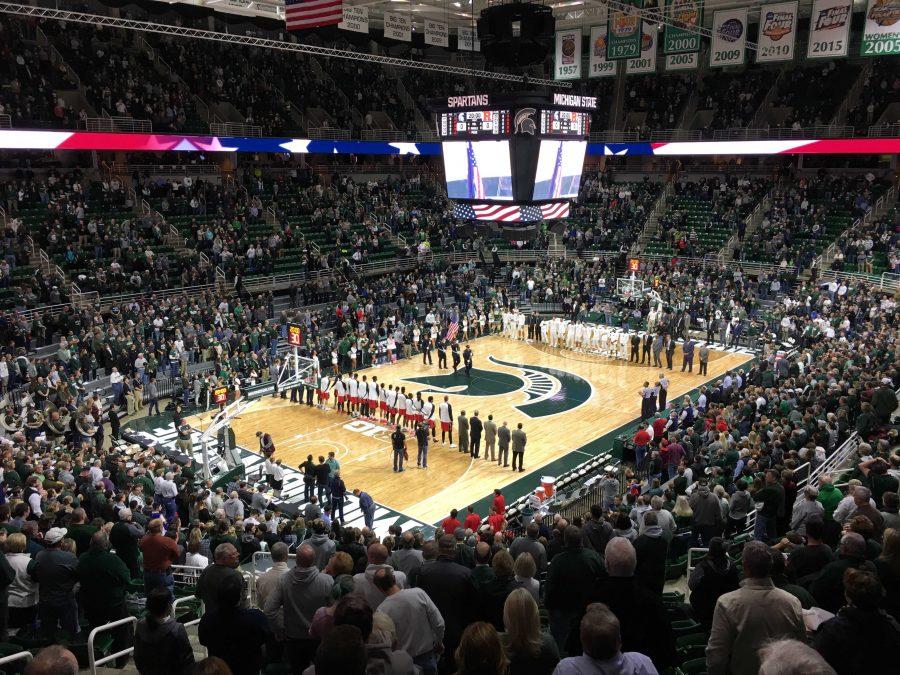 Michigan State began 2017 much like it finished 2016: pulling away late from a testy Big Ten foe.

The Spartans took most of the game to deliver the final knockout punch that the 2015-16 squad often did before halftime. But they still emerged victorious, 93-65, over Rutgers Wednesday night at the Breslin Center.

The story of the day was the Spartan offense, which was reenergized by the return of freshman superstar Miles Bridges. After missing the previous seven games with an ankle injury, Bridges came off the bench to play 17 minutes, totaling six points and six rebounds.

“I thought he did some good things,” Michigan State coach Tom Izzo said about his freshman phenom. “A little sloppy on some screens that he’s got to improve on. But in general, a couple blocks, six rebounds, a couple great moves. I thought we did a pretty good job of playing within ourselves with him… All in all I think it was a successful night. I said between 15 and 18 minutes, we kept him at 17.”

Bridges’ return seemed to lift the entire team, as they scored their second-highest total of the season, only behind their 100-53 drubbing of Mississippi Valley State in the home opener. Senior shooting guard Eron Harris led the charge with 24 points, while reigning Big Ten Freshman of the Week Nick Ward chipped in with a quiet 15. Matt McQuaid also scored 12 in his highest-scoring game in a month.

“I think in Eron’s case, one of the negatives is he’s been consistently inconsistent,” Izzo said of his up-and-down senior. “I think if he lets the game come to him, uses the screens, a lot of good things can happen for him. As we get screening better, I think he’ll get more open shots. McQuaid felt more comfortable. They did spend a lot of time in the gym.”

Harris emerged with the best offensive performance in Big Ten play of his career. His 24 points were the third-highest total in his two years as a Spartan, and his most ever in a conference game.

“(Bridges’ return) may have had an effect on me that I didn’t even know it did,” Harris said. “But for the most part, I just tried to prepare myself mentally. In pregame I switched up a couple things, and I was blessed to be able to hit some shots tonight.”

Michigan State (11-5 overall, 3-0 Big Ten) struggled early, giving up six quick points to the Scarlet Knights (11-5, 0-3) in the first 63 seconds. Izzo was displeased with the lack of urgency from his players from the tip.

“We didn’t play with energy in the first half,” the Hall of Famer said. “I didn’t like the way we started the first half in many ways.”

That struggle lasted until Bridges made his return off the bench 4:04 into the game. Just 16 seconds later, the 6-foot-8 forward took a lob from McQuaid and slammed it down to tie the score at 13, bringing the Izzone-less Breslin Center crowd to a roar.

“As soon as I got in the game, (Izzo) just put that play on the board,” said Bridges. “That play usually never works for the lob, but this time it did.”

Izzo agreed that the play was planned out beforehand as a way to energize the team and the fans.

The home team never trailed beyond that point, thanks to a far superior shooting night both from the field and at the free throw line. Michigan State shot 58 percent for the game and 70 percent in the second half. The Spartans also shot 73 percent from the charity stripe–up from the season average of 61 percent–compared to 44 percent from Rutgers. The offensive flow all came down to the return of the team’s most talented offensive player in Bridges, even when he wasn’t scoring.

“He brought a special kind of energy,” said McQuaid, who threw Bridges his first alley-oop. “With those dunks, his plays on defense, he was rebounding. He brings a lot to the table. Just like on the offensive end, even when he’s just standing on the block, he’s still drawing the defense and they’ve got to pay attention to him. So he’s always effective on the court.”

Michigan State’s bench played a solid game as well. The Spartans’ reserves outpaced those of the Scarlet Knights 37-8, led by McQuaid with 12 and Kenny Goins with nine. No Spartan played more than 24 minutes, and 11 players got into the scoring column for Izzo’s squad.

The Spartans will play a neutral-site game against Penn State (9-7, 1-2) on Saturday. It will be held at Philadelphia’s historic Palestra. Tipoff is scheduled for 1:00 p.m. Penn State is coming off a 72-69 loss at Michigan in which it blew a 14-point lead.