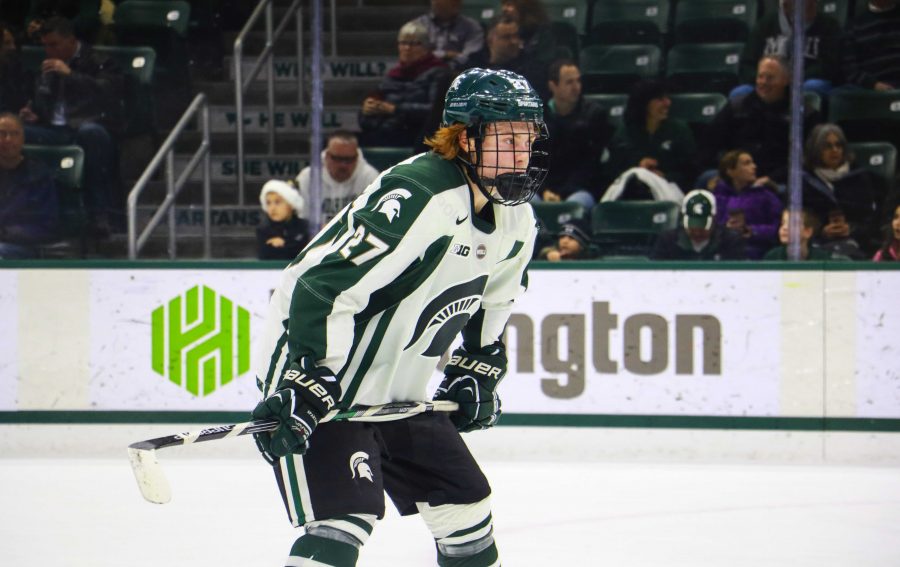 In an interview with Fox Sports Detroit, current Red Wing forward and MSU alumnus Drew Miller said that the Great Lakes Invitational is a great way to jump start a team and give them momentum going into the second half of the season. Well, Michigan State must have missed that memo as they fell 5-4 in overtime to rival Michigan, finishing in last place for the second straight year.

The Wolverines struck quick and often in the opening period. After a blown 3-on-1 by MSU, the Wolverines were able to develop a 2-on-1 of their own that ended with Tony Calderone putting the puck past Spartan goaltender John Letheman on the power play for his team leading ninth goal of the season.

With the quick turn around from game one to game two. Coach Tom Anastos did not want to play senior Ed Minney on short rest so Letheman got the start. It was a shaky first period for the freshman as he gave up three goals on just 12 shots in the opening 20 minutes.

The Wolverines were able to add to their lead less than three minutes after scoring the initial goal. This time, freshman Will Lockwood made a nice move to get around senior Rhett Holland and send the puck just over the blocker of Lethoman.

The Spartans were able to get back in the game with just under 12 minutes remaining in the period. Logan Lambdin lit the lamp for the Spartans, as he netted his third of the season with a nice shot that rocketed past U-M goaltender Zach Nagelvoort.

But as quickly as the Spartans were able to get back into the game, they were again seemingly taken out of it. Alex Kile was able to park himself right in front of the Spartan net and bang home a rebound to once again give the Wolverines a two goal lead. Kile would add another in the second period to extend with U-M lead to 4-1.

The third period Spartan comeback began just seven seconds in. Mason Appleton cut the Wolverine lead back down to two with a power play goal. The tally represents Appleton’s team leading eighth of the season. Assists came from Zach Osburn and Sam Saliba.

After giving up three goals in the opening period, coach Anastos’ team did nothing but gain momentum in the final 40 minutes of play as they outshot the Wolverines 31-23.

With momentum clearly on their side, Spartan defenseman Carson Gatt netted his second of the season and first career goal against Michigan to cut the deficit to one. Gatt found some open ice inside the left faceoff circle and sent a wrist shot that went top shelf on Nagelvoort. Villiam Haag was credited with an assist on the goal.

With just over two minutes to play in the game, the Spartans were desperately searching for a way to tie the game at four. They got just that thanks to the spring loaded boards at Joe Louis Arena. It was Thomas Ebbing that caught the puck off of the boards and sent it to an open JT Stenglein who scored his third of the season. The comeback was complete, but the game was not finished as the two teams headed to overtime.

After a multitude of chances from both sides in the extra session, Michigan’s Tony Calderone was the one who converted first. The junior made a power move to get to the front of the net and seal the third place finish for coach Red Berenson and his team.

Special teams hindered the Spartans again in this game. With the exception of the Appleton goal, the Spartan power play was weak yet again, finishing 1-of-5 on the evening. They had no sense of urgency, often looking to pass first instead of shoot.

Michigan State has now lost their fifth straight game and now sit 4-11-1 on the season. The Spartans are falling further behind in a Big Ten Conference that is getting much more competitive this year than it was a year ago. The next chance for MSU to crawl back into Big Ten relevancy will be Jan. 6 and 7 at Wisconsin. Pick drop is scheduled for 9:00 p.m. for game one and 8:0 p.m. for game two.