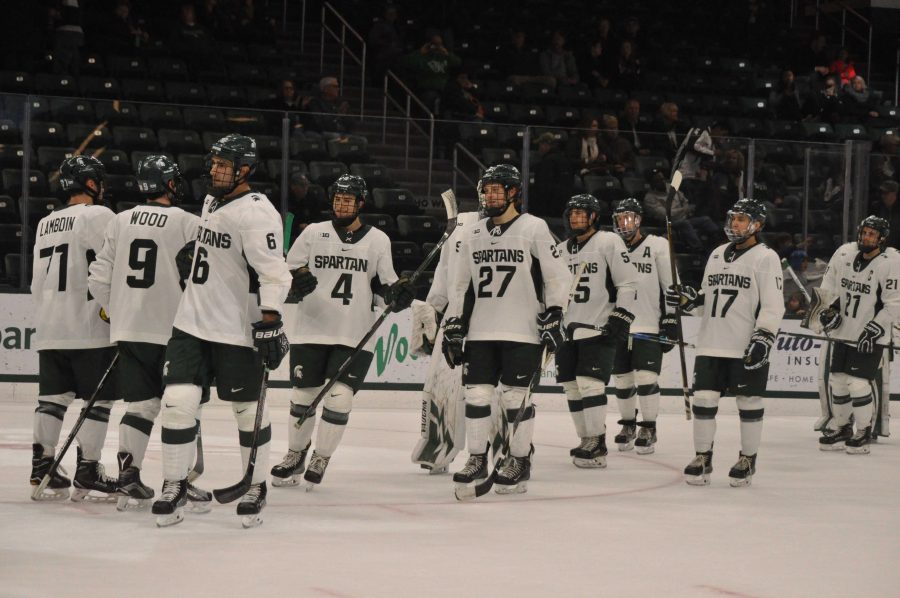 The Spartans fell to in-state rival Western Michigan 4-1 in the first game of the Great Lakes Invitational at Joe Louis Arena on Thursday.

After going 0-for-2 on the power play in the first period, Spartan defenseman Rhett Holland took an interference penalty at the 11:24 mark of the first. It only took the Broncos seven seconds to get on the board as Jade McMullen notched his fourth goal of the season.

Western Michigan struck again on the power play with less than three minutes left in the period. This time the Spartans survived for 15 seconds before giving up a goal.

Going into the second period, the Spartans and Broncos exchanged penalties with neither team being able to take advantage. Then, at the 8:37 mark of the second, JT Stenglein was assessed a minor for charging. 15 seconds after the call was assessed, the Broncos scored their third power play goal of the night to make it 3-0.

Momentum shifted in the Spartans’ favor however. Shortly after taking the 3-0 lead, Bronco defenseman Corey Schueneman was assessed a five-minute major and a 10 minute misconduct for checking from behind.

Michigan State was able to take advantage of the power play opportunity as Mason Appleton notched his seventh goal of the season that trimmed the WMU lead to 3-1.

Shortly after the Schueneman major expired however, Holland took another penalty at the 16:50 mark of the second. The Spartan PK lasted almost a full minute before the Broncos notched their fourth power-play goal of the game to extend the lead to 4-1.

MSU had four power play opportunities in the third period but came up empty, losing their fourth straight game.

Michigan State now sits at 4-10-1 after 15 games. Their penalty kill, once a strength of the team last season, currently is last in the country.

The Spartans will play Michigan, who lost to Michigan Tech 2-0 earlier in the afternoon, for the first time this season. It will be the first of five regular season meetings between the arch rivals.

Puck drop for MSU and UM is set for 3:30 p.m. Western Michigan and Michigan Tech will play for the GLI championship at 7:00 p.m.