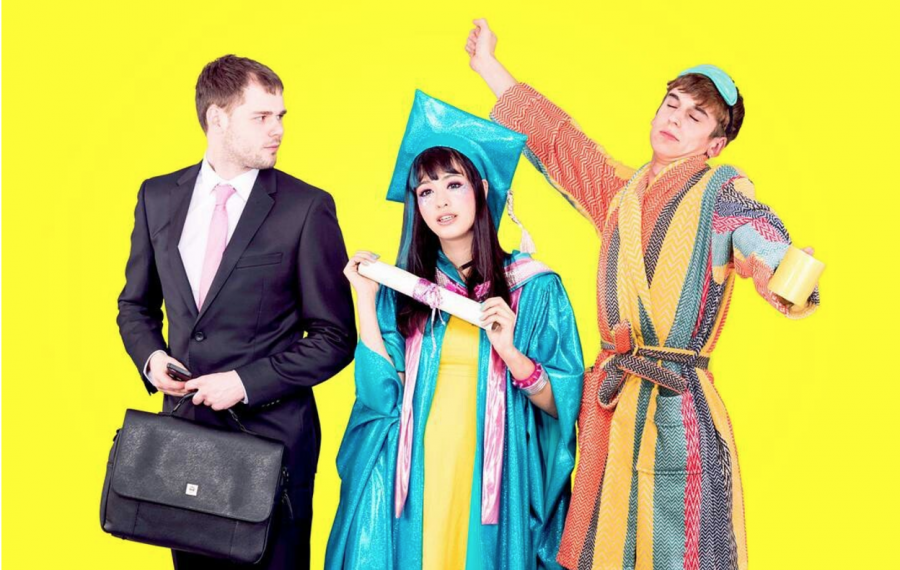 Kero Kero Bonito is a band in limbo.

The British pop trio, known for their abrasive, bilingual sound, has been tiptoeing a thin line since their debut in 2014. Their music sounds like it was made with classroom instruments, but singer/rapper Sarah Midori Perry’s lyrics often drift into themes of professional adulthood, with deceptively sterile topics like job interviews. It’s a strange mix of young and old, and it’s exactly why Kero Kero Bonito’s music is unlike anything you’ve ever heard.

One of their first major singles, “Flamingo,” is a pretty good introduction. Minimalist in every way, Perry’s schoolyard rhymes are punctuated with only a sparse beat and panflute sample. Her voice is crystal clear, and doesn’t always speak English; Perry, born to a British father and Japanese mother, represents both languages equally in Kero Kero Bonito’s music, slipping effortlessly between them mid-sentence.

At its surface, “Flamingo” is a song about the color pink. But deeper down, it refers to inclusion, originality, and body pride. There’s a wonderful moment in the chorus where Perry alludes to her own mixed heritage, singing “if you’re multicolored, that’s cool too.” It’s a powerful message wrapped in a childlike package. And it’s got a killer beat.

In recent years, the duality of Kero Kero Bonito has become more apparent. With the release of their second album, Bonito Graduation, in October, they’ve forged further into dichotomous territory: track 3 is a cynical retrospective on public schooling and job opportunities. Track 4 is about a forgetful goldfish.

“Trampoline,” the band’s latest single, is uncharacteristically lush, with poppy trance chords and an EDM tambourine leading into an explosive chorus. But, the lyrics tread familiar Kero Kero Bonito ground, using a child’s experience as a metaphor for adult optimism. A child tries new tricks on a trampoline, while an adult rebounds from failures and takes new risks.

These lyrics, of course, are written from experience. Kero Kero Bonito may be a band in limbo, but I doubt they’d rather be anywhere else.