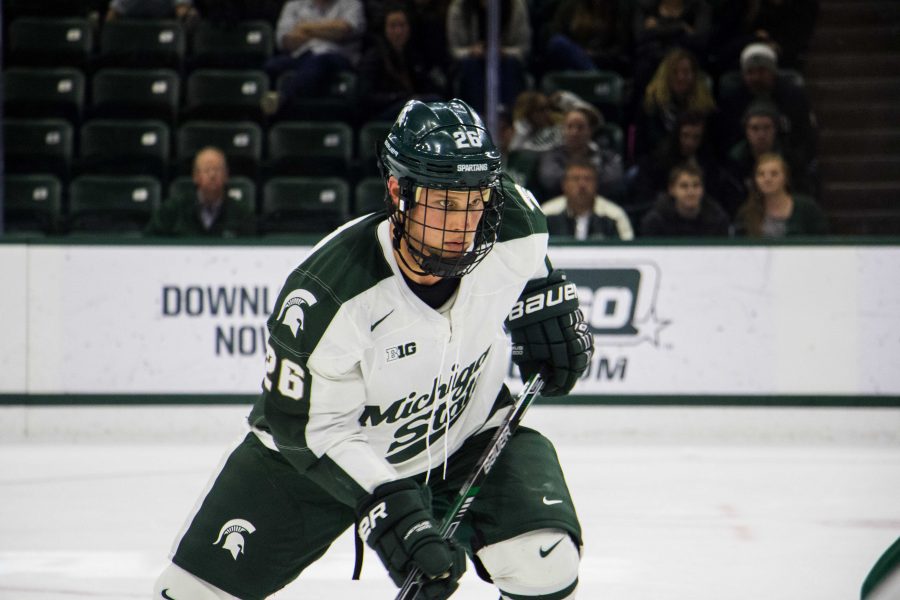 EAST LANSING, Mich — Deja Vu may be the best way to describe Saturday night’s 4-2 loss to No. 11 Minnesota at Munn Ice Arena.

“I thought we played much better tonight than last night, and unfortunately got the same result,” Spartan coach Tom Anastos said.

Just like on Friday night, senior JT Stenglein got Michigan State on the board in the first period after he deflected a shot from point past Gopher netminder Eric Schierhorn.

Unlike Friday night, the Spartans were able to take the 1-0 lead into the second period, and in fact extended their lead to 2-0 on perfectly executed three-on-two.

Joe Cox was able to take advantage of a Minnesota turnover, skated in on the right side and found the late man in Thomas Ebbing who rifled it into top corner.

For a time, Michigan State had all of the momentum, but a turnover in their own zone by Villiam Haag changed that.

Haag was under pressure to clear the zone and in desperation tried to ice the puck. Instead it landed right on the stick of Minnesota defenseman Jake Bischoff, who took one step and blew the puck past Ed Minney’s left shoulder to cut the Spartan lead to 2-1.

Later in the second period, freshman Sam Saliba saved a goal on his own goal-line but was pushed into his own goal by Minney. The resulting collision knocked the net off it’s moorings right before a shot came in and Saliba was given a penalty for delay of game.

The play looked innocent as it appeared that Saliba had no intent of knocking the net off, but the call was made regardless and coach Anastos received no explanation of the call by the official.

MSU killed off about a most of the ensuing penalty before the Justin Kloos found Rem Pitlick on a beautiful tic-tac-toe play. Pitlick deposited the puck into a wide open net to tie the game at two.

Entering the third period, Minnesota came out on fire, taking the Spartans completely off guard.

Midway through the third, JT Stenglein received a penalty for tripping. Once again the Spartans killed off a majority of the man-advantage. In the late stages of the kill, MSU had a prime opportunity to clear the puck off the glass but instead shot it into the stands resulting in a defensive zone draw.

The Spartans, who were struggling at the dot all night, lost the draw and the Gophers scored several seconds later thanks to a nifty move by Brent Gates Jr. to make it 3-2.

For the second straight night, Michigan State was down 3-2 in the third period.

“I think that anytime you have a young team like ours, you’re going to have some of those ups and downs as you’re going through the growing pains of gaining experience,” Anastos said.

The Spartans had chances to tie the game, none better then when Mason Appleton mishandleed the puck on what was nearly a wide open net.

“I had a gift on the back door, wide open net and it just bounced over my stick with four minutes left to tie it,” said Appleton. “I mean when you’re hot, you’re hot, you’re getting that puck on your stick and it’s going in but it just kinda just took that bounce on me”.

Minnesota was able to put MSU away on an empty net goal by Tyler Sheehy with just under a  minute left.

Despite the setback, Michigan State played with more effort and intensity then on Friday night. Furthermore, their puck possession was much better. For Anastos, there is still enough to be excited about moving forward.

“Is it disappointing, yep it’s definitely disappointing. Do I remain very encouraged by our team? Absolutely,” he said.