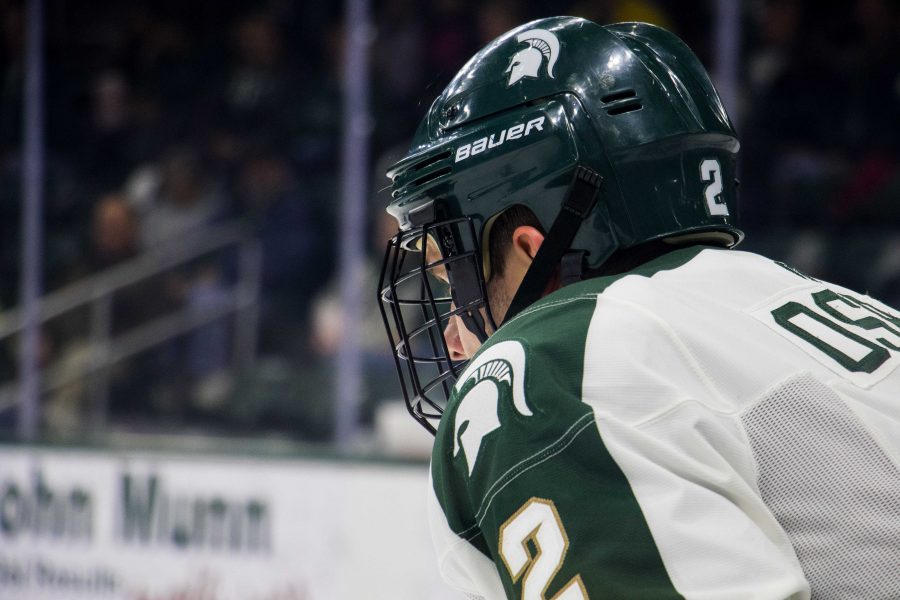 Stenglein nearly scored his second goal of the game just minutes after the first goal in a two-on-one chance but was ultimately stopped by Schierhorn. After the save, Michigan State was awarded the game’s first power play when Joey Marooney shoved Stenglein to the ground following the whistle.

The Gophers grabbed the game’s second goal on a rebound opportunity that was eventually banged home by forward Justin Kloos. The goal came on a shot from the slot, that after a series of bounces and deflections, Kloos was able to put it in the back of the net.

Just minutes before the first period came to a close, Michigan State goaltender Ed Minney made a flurry of fantastic saves that kept the game tied at one entering the first intermission.

At the conclusion of the first period, the Gophers had double as many shots as the Spartans. Minnesota had 16 shots, while MSU just managed eight.

With 7:34 remaining in the second period, the Gophers scored their second goal on a cross ice pass to Tyler Sheehy, who was sitting at the top of the circle with nothing but time and was able to beat Minney in the upper corner.

The Gophers scored their third goal when Minney chased the puck behind the net and received pressure behind him. Minney went to throw it along the boards, but instead passed it directly to Vinni Lettieri who was sitting alone right in front of the net.

The Spartans responded to the three unanswered Gopher goals with a goal of their own. Mason Appleton and Patrick Khodorenko did the dirty work in the corner, and Khodorenko passed the puck to Taro Hirose who was flying down the slot and fired it into the top corner to beat Schierhorn.

The Spartans were outshot 13 to three in the second period, but were able to save it from being a total disaster by scoring their second goal and making it a one goal game once again.

“We know how powerful of a power play they have so we spent a lot of time this week kind of dissecting it and I thought it was really just having active sticks in all the lanes because they’re a pretty power play,” Spartan captain Joe Cox said.

With 1:37 left in the third period the Spartans pulled their goalie for the extra skater. Minnesota’s Darian Romanko gained possession of the puck at the red line and immediately flicked it at the net. The puck eventually bounced in effectively sealing the win for the Gophers.

Despite the close game, Spartan coach Tom Anastos said that he knows the team can play much better than they did in this game.

Besides the one mistake behind the net, Minney had a very strong performance. Allowing three goals but notching 40 saves.

Michigan State will take on the Minnesota Gophers on Saturday at 8:00 p.m. in the second game of a back-to-back at Munn Ice Arena.