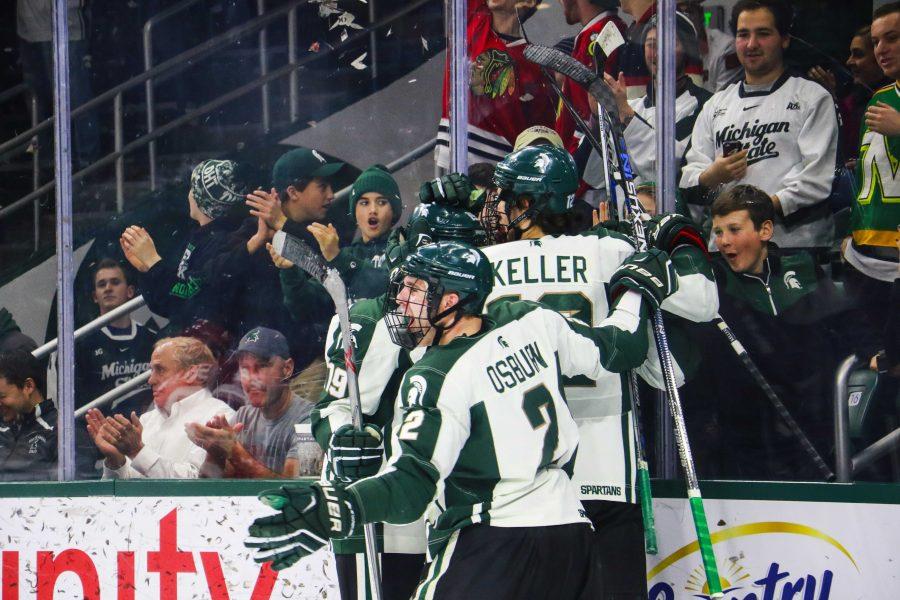 Before Friday night, if you had told anyone that Michigan State (4-6-1) would walk away from Grand Forks with a win and a tie against the No. 5 team in America, you would have been admitted to the psychiatric ward.

Regardless, Michigan State achieved just that.

Following up on their 4-3 victory over North Dakota last night, the Spartans tied the Fighting Hawks 2-2 before scoring in the three-on-three overtime period.

Due to the nature of overtime in the NCAA, the Spartan goal doesn’t count officially,but in the eyes of the Spartans and their fans you might as well chalk this one up as a win.

Unlike last night, MSU got on the board first in the opening period as senior Thomas Ebbing struck a shorthanded tally past UND goaltender Cam Johnson. The Fighting Hawks would respond though with freshman Zach Yon tying the score less than a minute later.

At the 12:25 mark of the period, junior Tucker Poolman notched his fourth goal of the season, this one on the power play, to make it 2-1 Fighting Hawks after one.

Michigan State responded well though as Spartan freshman Patrick Khodorenko evened the game up at two with his second of the season at the 5:41 mark of the second period.

The two teams went back and forth for the last 35 minutes of play. North Dakota launched over 22  shots towards Ed Minney in the final 40 minutes. But the junior netminder was up to the challenge, stopping all of them. MSU also had chances to break the deadlock but could not solve Johnson.

In the first overtime the Spartans outshot North Dakota 2-1 but could not secure the win.

With the game ending in an official tie, the two teams opted to play a three-on-three overtime. North Dakota is a member of the National Collegiate Hockey Conference, who uses the three-on-three format.

Jerad Rosburg, whose two goals sparked MSU to a victory on Friday, netted the OT winner.

While the game goes into the record books as a tie, this weekend will go down as a huge momentum shift for the Spartans and perhaps a major turning point going into conference play.

To go on the road to the No. 5 team in the nation and come away with a win and a tie is a major accomplishment for this program under sixth-year head coach Tom Anastos. Ed Minney has now started the last four games and is 2-1-1 in that span, it is likely that he has solidified his starting role moving forward. While MSU may not be ranked next week, it would be criminal for them not to receive votes.

And on a day when Spartan fans breathe a sigh of relief that their football season is finally over, they can now get excited for hockey again as the Spartans appear to be on the rise.