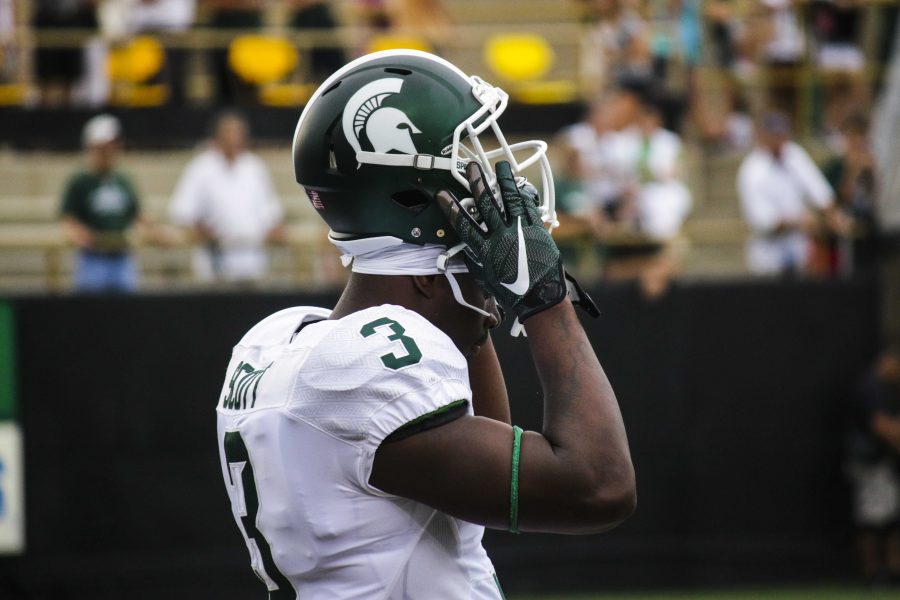 Michigan State’s season is in the books. Normally, we would take this time to preview the Big Ten Championship Game or a bowl game. But then we remember that the Spartans have a 3-9 record.

MSU had high expectations going into 2016. They lost numerous superstars from 2015 in Connor Cook, Jack Conklin, Shilique Calhoun and others. But most fans and reporters were convinced that this year’s senior class of Tyler O’Connor, RJ Shelton and Riley Bullough would be sufficient enough to pull off a decent year. This was not the case.

MSU had nothing to lose in their final game of the season against Penn State. There was no need to worry about deflating a season that was destroyed months ago.

But as the Spartans walked into Happy Valley with intentions of destroying the Nittany Lions’ playoff hopes, they left with another loss by a score of 45-12. Here are three takeaways from the Penn State game:

Spartans were doomed from the start
Ohio State’s double overtime victory over Michigan ended about half an hour after kickoff in Happy Valley. Minutes later, every man, woman and child in Beaver Stadium learned the score and knew what it meant for the Nittany Lions. With a victory over the Spartans, the Nittany Lions would punch their ticket to Indianapolis for the Big Ten Championship Game.

There was no way Nittany Lion coach James Franklin was going to let MSU walk out Beaver Stadium with a victory. Penn State had everything riding on this game, while Michigan State had nothing.

Nittany Lion quarterback Trace McSorley threw for 376 yards and four touchdowns. He took advantage of a secondary ridden with injuries, along with a front seven that consistently fails to generate a pass rush.

The Spartan offense looked solid early, as they often do. Fans could not help but be impressed with quarterback Damion Terry, who got his first career start in this game. Terry finished completing 7-of-12 passes for 101 yards. He provided a spark at the quarterback position, which is something the Spartans have not seen for a while.

But after exiting early with an injury, Tyler O’Connor was forced to relieve Terry. O’Connor ended the season and his career on a sour note, finishing with only 17 more passing yards than Terry on 21 more attempts.

If Michigan had beaten Ohio State, Penn State’s Big Ten Championship and College Football Playoff hopes would have been ruined. Then, MSU may have had a shot to at least make this game close. But considering the stakes, the Spartans had no chance against the Nittany Lions from the start.

Poor Fourth Quarter Play
The Spartans struck first against the Nittany Lions, but this was not much of a surprise, as MSU had scored first in eight of their nine losses. They came out of the gate looking take control early, but got steadily worse as the minutes ticked by, rendering them lifeless by the fourth quarter.

MSU outscored opponents 230-213 in the first three quarters this season. With this statistic, one would think that the Spartans would be 9-3, not 3-9. But in the fourth quarter, they have been outscored 117-59.

This is uncharacteristic of a Mark Dantonio team. The Spartans are usually rock solid in the fourth quarter. Somehow, the ability to play well late in games left with the 2015 senior class. Playing three good quarters suggests that MSU is better than most 3-9 teams, but it counts for nothing unless they finish strong.

RJ Shelton will be missed
Amidst an uncharacteristically disappointing season, not many have taken notice of senior wideout RJ Shelton. With the departure of 2015 star receiver Aaron Burbridge along with MacGarrett Kings and DeAnthony Arnett, most people figured that the MSU receiving corps would be in ruins.

Shelton proved otherwise. He racked up 74 yards through the air against the Nittany Lions and 15 more on the ground. He even completed a pass for 15 yards.

Shelton is arguably the most athletic and versatile player on MSU’s roster. Granted, Donnie Corley will probably outdo Shelton in both of these regards as he ages, but he is not there yet. Shelton finished the year with a team-high 53 receptions for 789 yards and five touchdowns. If there is one senior who will be sorely missed next year, it will be Shelton.