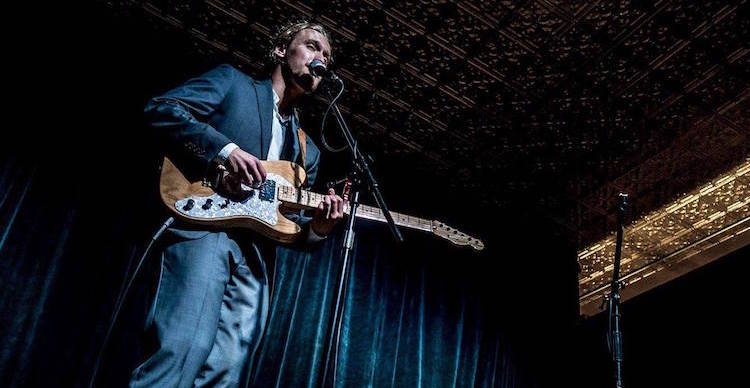 Okemos-native Monte Pride is one of Lansing’s youngest upcoming folk and blues influenced artist. With the release of his first full-length album Hawthorne Morning Sound (available now on Spotify, iTunes, and Bandcamp) and a sold out album release show, he’s surely on his way to becoming a prominent artist in the region, if he isn’t already.

Following his album release show, hosted at The Robin Theatre in REO Town Lansing, I had a chance to sit down with Monte Pride and talk with him about his decision to produce his first full-length album, what inspired the album’s songs and sounds, and much more.

You have two EP’s you’ve put out before this album, so when did you decide to take the next step and produce a full-length album?

Monte Pride: It was really just all the writing I’d been doing. The feeling kind of started to become present that those first EP’s just felt really really old. They just weren’t a good representation of what I had been writing and performing live. So I just felt it was time to just kind of get the new songs out.

You’ve talked a lot about the travels you did this summer while writing the album. In what ways did your travels influence the songs and overall sound of the album?

M: Yeah, like four or five of the songs were songs that I wrote during the recording process and they came after we started— they came after I came into the studio with a set of songs I thought was going to be the album. And they were inspired in the summer. I met one of my really good friends and just the time we spent together and the experiences we shared just inspired all these new songs. It’s really surprising, I’ve never been able to write so naturally. They songs came really really easily…usually a song, every now and then, it’ll sit in my notebook for a week and I won’t be able to finish it. [But] these ones inspired by my travels came very easily.

The album is titled Hawthorne Morning Sound, which is the name of the street you grew up on. What are some of the other influences that helped you write this album?

M: Yeah it does for sure. A lot of the older songs in particular really focused on nostalgia. And the theme of nostalgia and the sentiment of home— I didn’t really realize that it was the main theme until the whole thing came together and I was listening to the album as a whole and it just really kind of fit into that theme. But as far as the influence of the album’s songs, a lot them were just influenced by memories of home and other experiences.

You obviously had some help with this album, from Benjy Joung accompanying you on cello, and Elan Dantus helping you produce the album. How did you end up meeting these two guys?

M: With Elan it was a really natural process. We went to high school together and grew in Okemos together and over the past couple of years he’s started to study audio engineering at Kalamazoo college. And before that, in high school and early college we would get together and jam. He’s a musician, he plays guitar and is a really great singer. You can actually here him on the album—he sang some harmony and played piano…and also because we know each other really well, it was really easy to create together and collaborate. Ya know, I trusted his ear completely.

Also with Benjy, I met him— It was kind of a weird coincidence. I was playing at the Broad Art Museum last year and he just happened to be studying. He approached me after and said he really liked my stuff. We exchanged contact info…but after that we were out of contact for about six months, until I saw a photo of him with a cello on Facebook. That was just as I was starting to record and realized the songs needed a cello, so I reached out to him and he came to play on the album, and he did an amazing job. Since then, playing with him live has been very special—we have a connection beyond the music. I don’t think I’ve been able to play so easily with someone before.

One of the playing styles consistent in the album’s songs is finger picking the guitar. What made you decide to make that style such a big part of the album?

M: Ya know, there are a lot of amazing fingerstyle pickers up there, and I just try to emulate what they do. I think it’s just a really big part of my identity as a song writer and a musician, so it was just natural for it to be a part of the album.

What song from your new album would you say you have the deepest connection with?

M: That’s a really good question. Ya know all the connections are different, but as far as a direct connection—it kind of changes. But right now, one that I sang at the show, it’s called “Notes of Lavender”. It’s another one inspired by summertime. That one especially— a lot of those songs written in the summer are really nostalgic and just a lot of emotion and honesty wrapped up in those lyrics…but ya know, I feel a connections with all the songs. I wouldn’t sing them if I didn’t feel a connection.

And what song did you think was the most fun to write?

M: Definitely “Wordsmith,” the opening track. That’s another one I wrote this summer during the recording process. Yeah that one is just— sometimes it’s hard to write happy songs. I don’t have many, but that’s one that is just a happier one. That one was fun to write and it came really easily…The process with that one, the songwriting, was really organic.

The song “Millennial Bombshell Blues” was written for your friend, as you said at the release show. How have your friends and your time spent at MSU influenced the songs on the album?

M: Yeah it definitely has. That song and “Harmony” are two that are really heavily influenced by my time at MSU.

Lastly, the album release show was sold out. How has the support of the Lansing music community made you feel throughout the process of recording and sharing the album?

M: It’s been amazing. Ever since I started playing in town, I’ve always felt at home in Lansing. Every venue I’ve played has been super hospitable and just really kind. Everyone is really just working for each other, and there’s just so much willingness to help within our community. I think it’s really special…It’s really nice to have that support for the album with all the work that goes into it.

Monte Pride’s next show is at The Avenue Café in Lansing on December 4, 2016 opening for Joshua Powell and The Great Train Robbery.

You can also check out Hawthorne Morning Sound here on Spotify.