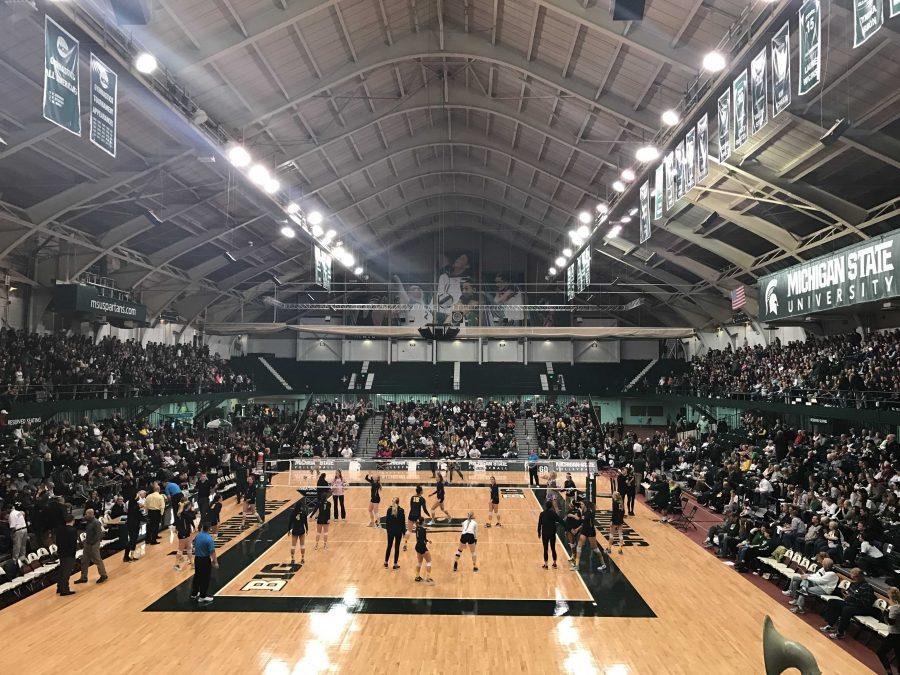 EAST LANSING, Mich.– The Jenison Fieldhouse flooded with a record breaking number of fans, over 6,000, Saturday night to see the big rivalry game between the Wolverines and the Spartans. To top it all off, the Spartans had their senior night as well. The Spartans won the match after four sets (25-23, 28-30, 25-23, 25-22).

“It was an unbelievable crowd. It was fun to look at all the way around the field house. There were people everywhere.”

Spartan Chloe Reinig talked about her emotional night as a senior,

“Very emotional night for me too. I was crying before the match started and i am a pretty tough person usually but tonight has really gotten to me. We’re a really tight knit group. We love eachother so much.”

Michigan State started the first set off struggling to get the lead, until Alyssa Garvelink turned up the aggressiveness in her swings, giving the Spartans the spark they needed. Soon after Garvelink’s kill, Autumn Bailey collected a kill from the outside and Abby Monson served up an ace for the Spartans. After an amazing hit from right-side by Chloe Reinig, and a missed serve from the Wolverines, the score was tied at 9.

The Spartans and the Wolverines went back and forth throughout the set. The only way to get a lead and keep it was to play smart. Michigan State started to use more strategy and ball placement on their side of the net. Reinig and Bailey placed roll shots in the dead center of the court where the Wolverines let it drop. The strategic placement from the Spartans widened the gap; 17-13. A missed serve from Michigan closed out the set for the Spartans, 25-23.

The Spartans kicked up the heat in the second set, coming out with three points in a row. Michigan started fighting back with some big blocks and powerful swings, but failed to take the lead, and trailed behind 10-7. A lot of net violations and doubles were called this game really changing the momentum of the sets.

Brooke Kranda, outside hitter, smoked the ball down for a Michigan State point. Michigan put up some really big blocks, and tied the game at 14. The lead jumped around the two teams, because of missed serves and big swings. Bailey played a key role in this set with her crucial hits and hustle. Garvelink also increased her intensity and picked up a point; 21-21. After back to back possession changes, Michigan blocks and hits gave them the win, 30-28.

The third set was full of crucial moments and mistakes from both teams. Spartan ladies, started in a rough patch, not able to get the lead. After two missed serves and a few miss-hits, Spartans trailed 4-6. Bailey swung hard for a cross-court shot to help the Spartans but it failed to put them in the lead. Michigan State’s defense and hustle was the only thing keeping them close on the scoreboard.

Big hits from Kranda, Garvelink, and Reinig finally tied the teams at 11. Bailey was killing it in the front with a huge overpass hit, and extremely good netplay. A big hit from Allyssah Fitterer and a big block from her and teammate, Rachel Minarick put the Spartans ahead; 20-19. Garvelink closed the set with a significant middle hit, Spartans win the third set 25-23.

Michigan State lead strongly in the fourth set with extreme determination to end the game in four. With solid blocks from Fitterer and Garvelink, the Spartans held the lead at 7-2. Spartan swings from front row were incredibly aggressive, and with the level of intensity they played at, the gap widened. The Wolverines hung in there with big blocks and Spartan hitting errors.

After an ace from Fitterer, Michigan State was up 16-9. Bailey made a significant impact on the Spartan’s side with unrelenting kills from back row. After a neck to neck battle for the win, Michigan missed a serve, and the Spartans won the fourth set, 25-22.

“It was just great to win for the seniors tonight. I’m so proud of all of them, they all bring something different to the team,” Bailey said. “It’s great that we had them as role models, and kind of a support system for our team. They’ve set a good example for what’s to come in the next season.”