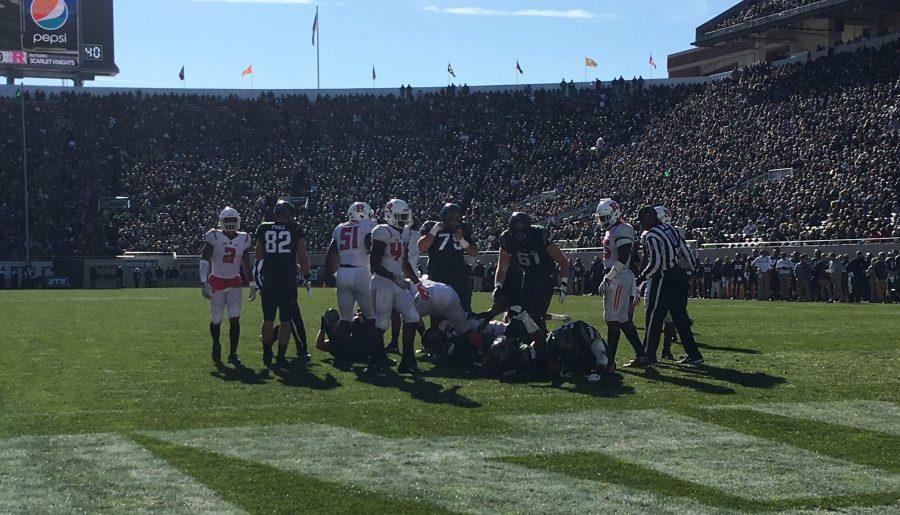 EAST LANSING, Mich. — The battle of the bottom feeders commenced in Spartan Stadium as Michigan State battled Rutgers in search for their first conference win. After seven straight weeks of frustrating losses, the Spartans finally picked up a victory, and it was in exclamatory fashion by defeating the Scarlet knights 49-0.

“It was a thrill for our football team. Great job by Spartan Nation coming out for this football game,” said MSU coach Mark Dantonio. “You would’ve thought we won the championship in that locker room. It’s been a long time.”

It looked like it was going to be a long game early on for the Spartans. RJ Shelton muffed the kickoff, the clock crew forgot to start the clock and MSU quarterback Tyler O’Connor missed a wide open receiver to cause an early three and out. But these difficulties were incredibly short-lived.

LJ Scott headlined the Spartan offense, taking advantage of the last ranked run-defense in the Big Ten by racking up 122 yards and a touchdown. O’Connor connected early with tight end Josiah Price in the end zone for his first of two touchdowns, followed by an excellently read pick-six by Demetrius Cox.

Then, the LJ Scott show launched. Rutgers had no answer for one of the more premiere backs in the nation combined with a bigger and stronger offensive line.

“The guys up front, you know, I give all my credit to them,” Scott said. “They work hard. They come to play everyday in practice and throughout the game.”

Gerald Holmes relieved Scott for a drive in the second quarter, and Madre London did the same later. The result was the same. Both finished the contest with 52 yards on nine carries.

As the old saying goes, a good running back is a quarterback’s best friend. This could not have been more true for Tyler O’Connor who fought a defense stacked to stop the run.

O’Connor had plenty inaccurate throws, but was superb on the play-action, connecting ten times for 141 yards before being replaced by Damion Terry with just under 5 minutes remaining in the third. Being replaced is nothing new for O’Connor, but this time it was because the Spartan offense was playing well—not poorly. Colar Kuhns came in to replace Terry in the fourth.

The Scarlet Knight offense was just as bad as the defense. They lost every battle up front and never established a strong ground presence. Scarlet Knight quarterback Giovanni Rescigno was under constant pressure, particularly from linebackers Chris Frey, Riley Bullough and Andrew Dowell, who each had six tackles.

Rescigno only completed six passes for 40 yards and two interceptions before Tylin Oden relieved him. MSU finished plus two in the turnover margin for the first time since the Notre Dame game and shut out a team for the first time this season.

“I think as a defensive coach, anytime you can shut somebody out in this day and age, it’s a pretty big accomplishment,” Dantonio said. “Everybody’s got players [and] this is a football team (Rutgers) that’s played well in the past couple of weeks. You get a shutout, that’s big.”

Perhaps the biggest takeaway for the Spartans is the evolution of freshmen. Dantonio gave many of his younger players a chance to shine today, and they made the most of it. Multiple freshmen lit up the stat sheet including wideout Trishton Jackson with 67 yards, linebacker Joe Bachie with three tackles (1.5 for a loss) and Donnie Corley who played both sides of the ball.

“He (Corley) is a football player,” said MSU co-defensive coordinator Harlon Barnett. “He is just a natural born football player. That was great to see and I can’t wait to watch it on film”

The Spartans are officially not last place in the Big Ten, which should not come as much celebration. Still, Dantonio and company cannot help but to be content with the involvement and improvement of younger players and the future of Michigan State football.

“I think freshmen usually turn the corner after the season when they have a chance to digest everything and they grow from that,” Dantonio said. “I think they played better.”

The Spartans host No. 5 Ohio State next week where they will look to capture their fourth victory of the season. Kickoff is at noon ET at Spartan Stadium.