What Did the Spartans Learn in Season Opening Loss? 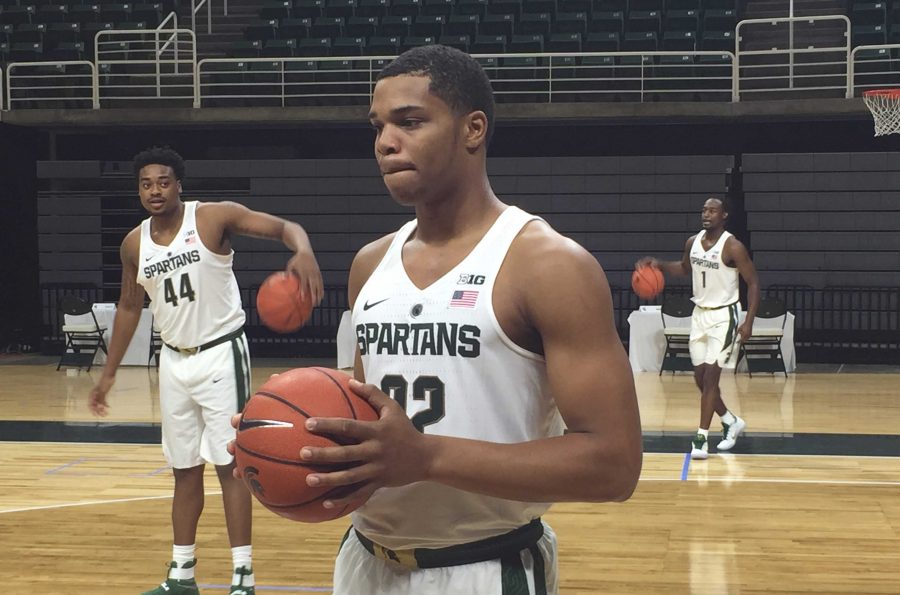 Half a world away from his campus, Miles Bridges played out of this world.

However, the freshman sensation’s 21 points were just not enough, as No. 12 Michigan State dropped its regular season opener to No. 10 Arizona, 65-63. The contest was part of the Armed Forces Classic being played in Honolulu, Hawaii.

Tum Tum Nairn rattled in a game-tying three-pointer with 7 seconds left, but Arizona guard Kadeem Allen went coast-to-coast and laid in the game-winner with 1.9 seconds left to seal it for the Wildcats.

As with all early-season contests, Tom Izzo will have many teaching points for his team before they travel across the country to New York City to take on No. 2 Kentucky on Tuesday. So what did the Spartans learn in their season opener?
Miles Bridges is Legit
The game began with a 17-2 run by the Spartans. Do-it-all freshman Miles Bridges sparked the initial run–and the entire game–with smooth athleticism and some highlight-reel dunks.

Bridges’ 21 points were the most by anyone on the court and the second-most ever for a Spartan freshman in his debut, only trailing Jay Vincent’s 25 points in 1977. He also grabbed seven rebounds. The Flint native quickly grabbed the nation’s attention in the nationally televised game, hitting his only three of the game and throwing down a monster reverse dunk in the first four minutes.

When the Spartans needed a momentum builder throughout the game, they went to Bridges. The only slightest concern for the freshman was ball security, as he gave up 4 turnovers.

Expect a whole lot of highlights from the 6-foot-7 power forward going forward. He just may be the best dunker in Michigan State history. And at this rate, he may not have many more years in East Lansing to prove that.
Someone Must Emerge in Crunch Time
Late-game execution was one area that the Spartans typically excelled in throughout the 2015-16 season. That was mostly thanks to the stellar play of Denzel Valentine, who is now collecting paychecks from the NBA’s Chicago Bulls. In crunch time, the Spartans (and their opponents) knew the guy that was getting the ball: No. 45.

Now that Valentine has graduated, along with other go-to seniors like Matt Costello and Bryn Forbes, the Spartans are in a bit of an identity crisis late in games. Who will get the ball when the team needs a basket?

Tum Tum Nairn is the team’s starting point guard, but he is in no way a scorer. Eron Harris is the only returning starter on the roster, but he missed three jump shots in the last four minutes against Arizona. Plus, he has not been able to create his own shot comfortably through three games this season. Matt McQuaid is another returning contributor and the best shooter on the team, but he missed two from beyond the arc in the final 2:27.

That leads us to Bridges. Can the freshman put the team on his back when they need it most? That may be too much to ask of even the No. 1 recruit in the nation, let alone No. 8. Bridges has the ability to create his own shot or drive to the hoop. But does he have the maturity to take the right shot in a win-or-go-home situation? Tom Izzo is tasked with finding the clutch gene in one of his players, because for the rest of November and in the rugged Big Ten, the Spartans will play games that come down to the last minute.
Frontcourt Depth Will Be an Issue
There may not be a position group in the Big Ten as damaged by injuries already as much as the Spartans’ frontcourt. Forwards Ben Carter and Gavin Schilling, who were both expected to take on major roles–and maybe even start–for the Spartans are both out at least until Big Ten play. That leaves Kenny Goins, a 6-foot-6 undersized power forward, starting at center. Backing him up is freshman Nick Ward, who can dazzle at times.

While Goins played well against Arizona (4 points, 8 rebounds), he did go down with a knee injury in the second half. That left the Spartans with Ward and Bridges in the frontcourt, with Kyle Ahrens and Matt Van Dyk serving as their backups. If Goins or Bridges face any type of foul trouble or injury during the season, the team will likely be in trouble.

Michigan State’s guard play appears capable of carrying the load for the team offensively, especially if Bridges continues playing efficient basketball. But on defense, the opposition throughout the season will likely challenge the Spartans’ lack of depth by pounding it down low, something Arizona looked more than comfortable doing. If the Spartans lose another body in the frontcourt, wins will be hard to come by for the rest of the season.