A New Kind of Coven: Three Women’s Happy Medium of Feminism, Comedy, and the Occult 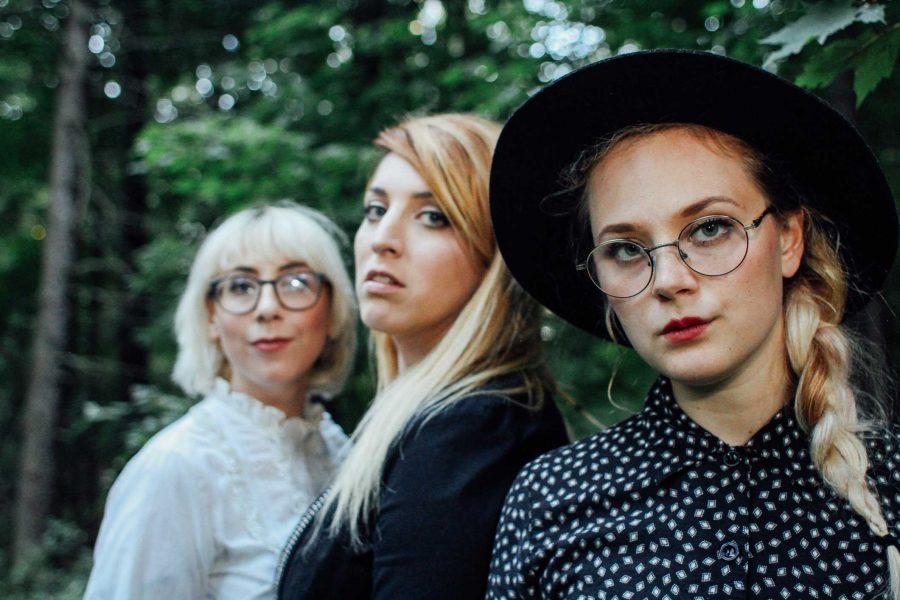 Sitting down with Lansing, Michigan’s all-female comedic troupe Comedy Coven, it’s easy to draw parallels between the women and their occult namesake: present in their snug living room are black, wide-brimmed hats, a slinking cat and even brews… of a certain kind. But the trio of Stephanie Onderchanin, Tricia Chamberlain and Emily Syrja prove to be much more than Halloween kitsch.  They’re dynamic, they’re aware and above all, they’re damn funny.

In a world where female comedians are a rarity, Onderchanin, Chamberlain and Syrja have spent the past two years working to build a brand out of a self-proclaimed “passion project.” Since 2014, Comedy Coven has grown from presenting shows for small groups of friends in Syrja’s living room to packing Lansing’s Robin Theatre for their monthly sketch and stand-up routines.  Yet as their popularity grows, the trio has kept in perspective the impact of their work not only in the local comedy community, but also in reference to a national comedy scene stereotypically distinguished by middle-aged men.

“The coolest thing about being women in comedy is that the waters are largely uncharted,” Onderchanin explains. “Although on the flipside of it, it’s one of the more challenging things. There’s always people asking, ‘Well, are you an Amy Schumer or a Sarah Silverman, or a little of both?’ Because there’s so few examples of women in comedy, now it’s like, ‘I’m going to be my own example!’”

“Women in comedy is very vogue right now, and it’s nice to be able to take advantage of that,” Chamberlain adds. “I think all of us feel like it’s a long time coming that women get to develop their own voice. There’s the whole patriarchal thing about having to enjoy life from a male’s point of view. Like, why are women able to laugh at men’s comedy but men can’t laugh at women’s comedy? Because they’ve never been able to look at and appreciate a woman’s perspective. The cool thing is creating your own path. I get to show the world… or at least this community, life from my point of view.”

Take a sketch from one of their recent shows, for example. In a guitar and recorder — yes, those plastic instruments you were forced to play in elementary school — backed rendition of the classic Billy Joel hit “We Didn’t Start the Fire,” the trio replaces the infamous ailments of the late 80s with some of the issues women face in the present day – Twitter trolls and nip slips included.

“You have a unique opportunity to change people’s minds, because there are a very few established, differing opinions about women in comedy,” Syrja says. “It’s still a pretty polarizing issue, at least within the comedy community, and we have the opportunity to surprise people and offer people a perspective that makes them think differently.”

By building a discussion around these polarizing issues, the Coven takes it as no surprise that they’ve received their share of criticism. But the best way to combat the naysayers, they explain, is to turn the negative comments into their own strategies for success.

“It’s cool to be strategic about being a woman in comedy,” Onderchanin explains. “We’ve been criticized for things like, oh, using our pictures to promote ourselves. Well if we’re going to be objectified for being women, we might as well put that to fucking work to promote our show! We’re all super aware of what the challenges are and we get to turn it on its head and be like, ‘Yeah! We’re going to utilize that!’”

“It’s empowering to create a successful thing out of the very thing that’s oppressing us,” Chamberlain agrees.

On the topic of oppression, a 2012 Jezebel article about the “punching up” and “punching down” of jokes became the topic of a makeshift rountable discussion among the three women. Punching down, they explained, is the idea that disenfranchised groups regularly appear as the butt of jokes. The article argues that jokes shouldn’t punch down, but rather punch up, with comedians making the oppressors the butt of their humor, instead.

“Some jokes are about farts,” Syrja chimes.

“Right! So I think that’s also something, too. Yes, we are feminists, but sometimes because we have identified ourselves as women in comedy who are socially conscious, it’s thought that everything we do is some kind of statement. And it’s not,” Onderchanin continues. “We make lots of dumb jokes all of the time. We contain multitudes, and that’s very important to me.”

Yet even the minute details of Comedy Coven seem to reflect their progressive attitude – right down to their name. While the trio described how “Comedy Coven” was at first just a “cool” phrase with catchy alliteration, they also explained how it has grown to capture the essence of who they are.

“It sums up our sort of underground persona,” Chamberlain says. “Witchcraft and witching is about female empowerment, and it’s always kind of had that connotation. It really encapsulates all that we are and all that we stand for. You know, the traditional three hags of a coven.”