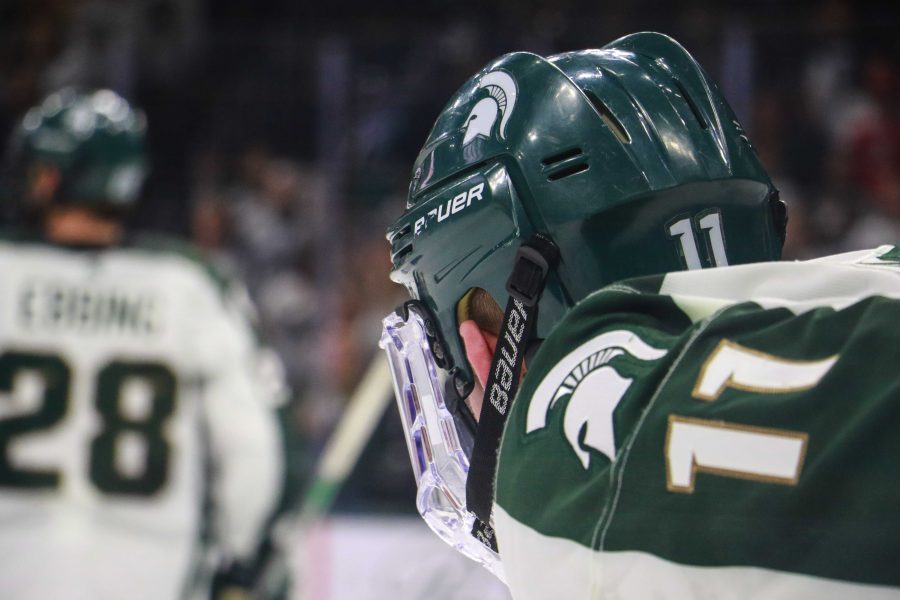 Goaltending and defensive questions abound as the Spartans started their 2016-17 season 0-2, falling to Lake Superior State 6-1 and 7-3 at Taffey Abel Arena over the weekend. The 13 goals are the most the Spartans have given up in a season opener during coach Tom Anastos’ tenure.

The Lakers struck early on Friday night, netting their first goal just over two minutes in. Senior forward Villiam Haag tied the game up on a powerplay goal a few minutes later, but that would be the extent of the Spartan’s offense. Lake Superior was able to net the go ahead goal with less than two minutes left in the first period courtesy of junior forward J.T. Henke. Henke’s goal was somewhat controversial, as the Spartans claimed that goaltender Ed Minney was interfered with on the scoring play. The call stood and the floodgates opened, as the Lakers would score four consecutive powerplay goals to seal a 6-1 victory.

Michigan State went 1-of-11 on the powerplay in the penalty filled affair, and senior assistant captain Rhett Holland was assessed a 5-minute major and a game misconduct for fighting.

Saturday night saw the collegiate debut of freshman goaltender John Lethemon. It was anything but memorable. Lethemon allowed four first period goals on 13 shots. Senior Laker forward Gus Correale was the story of the game with his two first period goals, including a shorthanded goal that would eventually be the difference.

Minney returned to duty between the pipes in the second, and the Spartans came out flying with two goals early in the period. Freshman Logan Lambdin scored his first  goal about five minutes into the frame. Sophomore defenseman Zach Osburn added his first of the season just over a minute later.

Just as the Spartans were knocking on the door, the Lakers soon shut it. LSSU sophomores Anthony Nellis and Mitch Hults added two more goals to extend the lead to 6-2. Redshirt freshman Jerad Rosburg notched his first collegiate goal to cut the Lakers lead to 6-3.

Henke added an insurance goal late in the third to seal the win 7-3 as well as the series sweep.

Just like the Spartan football team, there are numerous questions that have yet to be answered.

Spartan goaltenders allowed a combined 13 goals on 64 shots. The defense, already missing junior Carson Gatt to upper body injury, struggled. The Michigan State special teams were atrocious, going 1-of-18 on the powerplay and the penalty kill operating at only 62.5 percent.

Compounding matters is that the goaltending situation is just as uncertain. Gone are the days of workhorse Jake Hildebrand anchoring the backend. Now the Spartan coaching staff must figure out a strategy with Minney and Lethemon. Neither has seen much action and have yet to impress in the time they have accumulated.

The only saving grace is that the season is young and so is this team. There is still time to iron out the many kinks. But with a skilled Denver team coming to Munn next week, MSU might not have as much time as they would like.