Spartan Struggles Not Solely on O’Connor 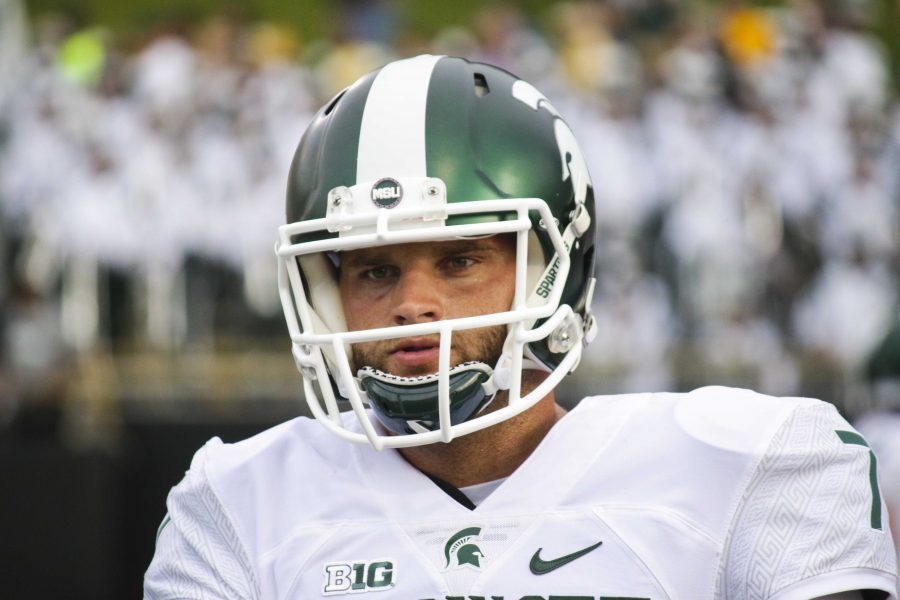 After BYU came into Spartan stadium and beat struggling Michigan State 31-14, handing them their third straight loss for the first time since 2009, quarterback Tyler O’Connor was forced to answer questions where the lights are the brightest: the media room.

O’Connor knows that the quarterback will always be in the spotlight, whether he wants to be or not. O’Connor certainly is in the spotlight considering his team is now 2-3 after making it to the College Football Playoff last season.

Though O’Connor took the blame for the loss on Saturday, ultimately getting benched in the loss, he is barely this team’s issue. In fact, he is far from it.

O’Connor didn’t look horrible. In fact he led an impressive 15-play, 72-yard touchdown drive to open up the game. O’Connor went 6-of-8 on that drive, and converted two big third downs and even one crucial fourth down, all through the air. Some may say that was the best he’s looked in that drive all season.

O’Connor, who prides himself on perfecting everything he can control, had little negative criticism about his performance following the game. For the vast majority, he made the right plays and did exactly what was called and what he was supposed to do.

Although O’Connor didn’t get near blaming coordinator Dave Warner for the play calling, it really is the elephant in the room. The play calling all season has been a major issue for a very lethargic and seemingly nonexistent Spartan offense.

While O’Connor’s play wasn’t the best on Saturday, it was by no means horrible either. On the next five drives following the opening scoring drive, O’Connor threw the ball just three times. Yes you read that right, three times. One pass was a drop and one was a completion. Apparently that warranted enough for Coach Dantonio to switch up the quarterback play.

The lack of play calling by Warner has made the offense a shell of itself, putting up a meek 105 points through five games in which the opponents haven’t been title contenders, to say the least.

Coming to Warner’s defense, they lack the personnel on the offensive side of the ball to get creative with the offense, but this conservative approach on offense is getting hard to watch. I understand you don’t have much to work with on offense, but when you’re playing poor defenses like Indiana and an average BYU team, you have to take some chances on offense.

The defense has played well enough this season considering the amount of injuries they’re dealing with. The continued themes of each game are the offense stalling almost every drive, forcing the defense to get back onto the field after minimum rest on the sidelines. In every loss thus far, the defense has held the game close until one critical play or heading into the fourth quarter, and it’s a direct effect from a nonexistent offense.

As long as coach Warner is still on the sidelines this season, don’t get your hopes up for anything too exciting this. I don’t see this problem being an in-season fix. Coach Dantonio is a man of integrity and we won’t see a change at the coordinator position.

A possible quarterback swap to either Damion Terry or Brian Lewerke may be needed, as Terry, Lewerke and O’Connor have all been named co-starters for Saturday’s homecoming game with Northwestern. O’Connor hasn’t done a horrible job, but really just change for the sake of change may be in store to try anything to get this offense to finally click.

If you can’t move the ball effectively during games, you can’t win, it’s plain and simple. While their chance at a repeat in the playoffs are gone with the wind, the lack of offensive production may have the Spartans finding themselves not leaving the state of Michigan for a bowl game.