A Brief Chat with Mike and Mike of Somos 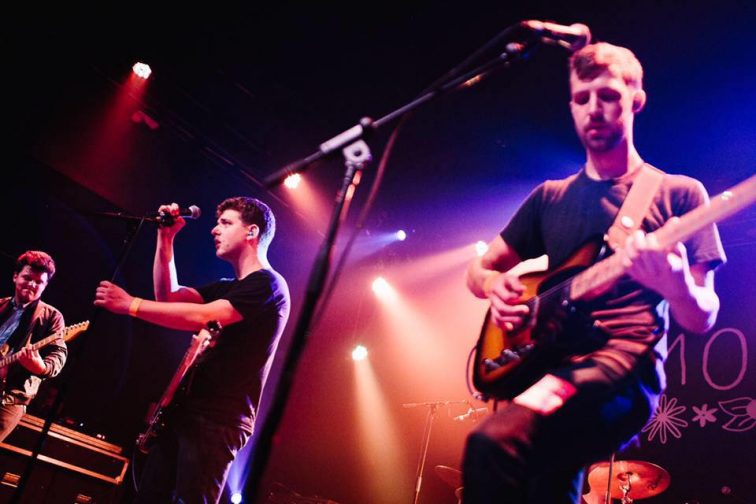 Impact’s very own Music Director, Claire Postelli, got the chance to sit down with Michael Fiorentino and Mike Benoit of pop-punk band Somos last month.

We transcribed the brief chat at the Pike Room for your reading pleasure.

First off, can we just say our names, so we know who’s who?

Okay so first question- it isn’t necessarily about you guys. But if you could have someone listen to any album in the whole world, what album would you tell them to listen to?

Fiorentino: Blood on the tracks by Bob Dylan.

Benoit: I always struggle with these ultimate album questions.

Alright, say someone has not heard any of your music. What song would you tell them to listen to first?

Benoit: I think maybe Streets Upon Streets because that song kind of encapsulates a lot of stuff. That song shows the side of the band from back in the day, and then also some of what we are are doing now.

You guys recently dedicated your set at Riot Fest to Black Lives Matter. What role does activism play in your music and performances? Are there themes in your new album relating to activism?

Fiorentino: Some of the themes are about people struggling in the economy, but at shows we don’t like to get too heavy with it. We like to dedicate a song and say a few lines, just as a way to let people in the audience know that, “this is cool, someone is publicly saying this. Maybe I could be doing this too.”

Also, we like to do small things on social media…It sort of shows other bands and performers that this is something they can do. When we’re not on tour, I’m active in the socialist organization. So I stay busy with political organizing. Sometimes it bleeds over into the band, like at Riot Fest.

Benoit: I completely 100% agree on this. I think that it is really important to give these causes, and marginalized people a voice, especially if we have this platform that we can do it from. We can raise awareness for people who may not consider it in their daily lives, get them to think about it a little more. I think it helped move these causes along in a really positive way.

Can you tell us the story behind you stage name, Somos? Where does that come from?

Benoit: It’s not super interesting, but we saw it in Spanish class one day, and we thought it looked good as like a title and in print too. It’s Spanish for “we are,” and again I think it goes back to politics and uniting.

Is there anything you guys geek out about or hobbies you have, that people might not guess?

Fiorentino: Justin and I like to play chess a lot. We bought a mini chessboard just for this tour. We’ll get really into a band, and we will just geek out about a band. Listen to each one of their records, talk about it. Those are things as we as a band sort of geek out about.

If you were a radio host, what would the theme or genre of your show be?

Fiorentino: Probably politics, I would like to get into that.

Benoit: I would like to turn people onto bands they might not hear too often, stuff that may be underlooked, or overlooked I should say.

So what’s snacks do you have to have with you, when you’re going on tour?

Benoit: This is kind of a boring answer but I’m a drummer so I eat a lot of bananas because they have potassium and it helps with the joints, hydration, and stuff like that.

Fiorentino: Well I like the really thin seaweed chips that you get at Whole Foods

So you’re all from the Boston area – if we stopped there, what is one place we should visit?

Fiorentino: MFA is really nice. Museum of Fine Art. Just walk around the neighborhoods, the big tourist destinations are really cool, and they do have a lot of history there, but it really is a city of neighborhoods.

Benoit: It’s a diverse city, and all the neighborhoods have distinct vibes, and it can be a lot of fun to just go around and kind of see what they have to offer.

What fictional/cartoon character do you relate the most to, and why?

Benoit: Probably Rocko from Rocko’s Modern life, he just struggled with like our modern world on a day-to-day basis.

Benoit: I don’t know, maybe Dilbert. Because he really can’t help but be caught in the system, but you see it and are angry at it.

Are you guys currently streaming anything on netflix?

What is in store for you guys?

Benoit: I think we’re gonna definitely try to dive into writing. Probably gonna spend the next couple months on that. We’re also gonna do some holiday shows  and college shows hopefully over the winter.

Fiorentino: Yeah I’m excited, I’m gonna do a solo set in a women’s prison. So yeah a lot of one-off shows and then a lot of writing, prepping for a bigger thing in the spring.

And finally, where can people find out more about you?

Benoit: Thank you for listening.