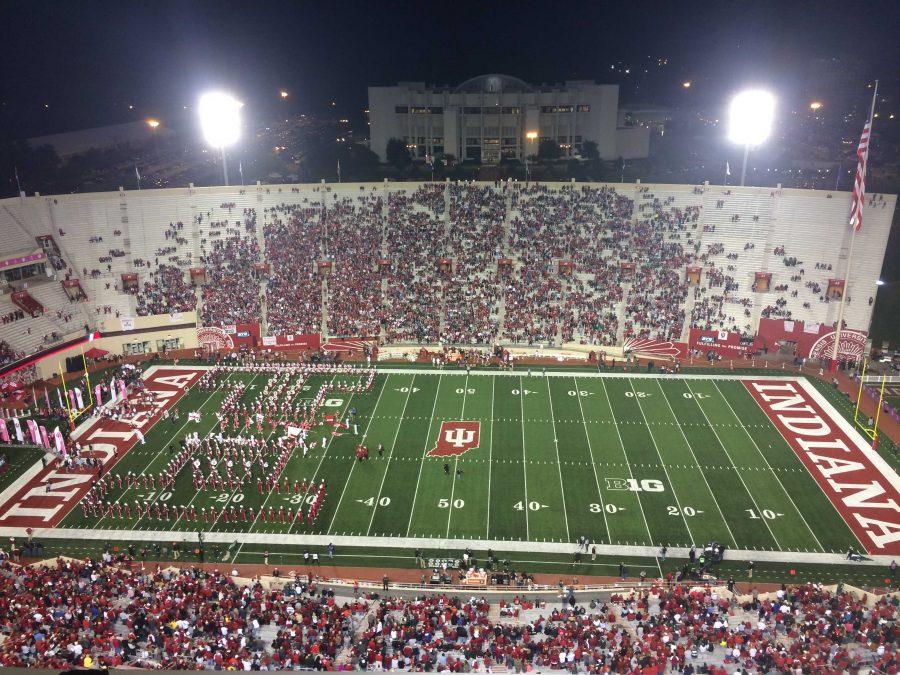 There is a huge tornado in East Lansing, and the Michigan State football program can’t seem to corral it. Indiana snapped the Spartans’ seven-game winning streak in the series, defeating MSU 24-21 in an overtime thriller Saturday in Bloomington.

The Hoosiers reclaimed the Old Brass Spittoon for the first time since 2006, while Spartan coach Mark Dantonio suffered his first loss against Indiana in his MSU tenure.

Here are my biggest three takeaways from Saturday’s showdown:
1. Offensive Line Struggles
The 10 penalties and 120 yards in penalties that the Spartans racked up in their season opener against Furman was no fluke. It was a sure sign of things to come.

The Spartan offensive line has struggled to hold their ground, evidenced by the 11 penalties for 98 yards on Saturday night. Most of them were holding calls on the big boys on both sides of the ball.

The combination of sloppy execution and poor communication resulted in most of the Spartans’ penalties. Kodi Kieler and Brian Allen had their hands full as they were responsible picking up extra rushers all night long. Indiana really puzzled the MSU offensive line with the different blitz packages they sent.

After a poor performance last week against Wisconsin, the Spartans had their eyes set for a strong rebound game. They were too aggressive before the snap, which resulted in several fault starts. You could see the fear in the offensive line, as the constant pressure got the best of them.

The Spartans were able to rack up 175 rushing yards, but it could have been a lot more if not for penalty markers flying left and right. MSU’s unfavorable field position caused them to convert only 4 of 15 on third down. Speaking of third downs…
2. Third Down Troubles
The victor in football usually does exceptionally well in third down situations, and that’s exactly what Indiana did. They converted over half of their third downs (9 of 16), with most of them coming on their three consecutive scoring drives in the second half.

What sparked the second half march was a trick play on third and goal, with Hoosier receiver Mitchell Paige connecting with quarterback Richard Lagow. Paige faked the jet sweep to the right and located Lagow on the other side of the field, making a great over the shoulder catch and leaving defensive end Evan Jones in his tracks. Indiana in just one play captured all the momentum that led to a dominating 21-0 scoring run that they desperately needed.

A combination of Indiana’s aggressive defensive approach and MSU’s lack of discipline was a recipe for success for the Hoosiers. Indiana frequently won on first and second downs, pushing the Spartans back and forcing third down situations. The Spartans had trouble converting even in short yardage situations, with Indiana selling out on the run.

The most notable third down for the Spartan offense came late in the first half. Quarterback Tyler O’Connor threw a dime to Donnie Corley, who had his man beat by about five yards at midfield. The true freshman just flat out dropped it because he looked up too soon before securing the catch.

Indiana made the crucial plays, and Michigan State could not capitalize on their opportunities. It was that simple.
3. Special Teams Woes Continue
If it wasn’t for senior kicker Michael Geiger, the Spartans would have been shut out against Wisconsin. He drilled two field goals in the first half with both being just under 50 yards. Geiger had just enough power to drive it through the crossbar.

Geiger’s inconsistency would arise yet again as he went 0 for 2 on Saturday. His first field goal try was blocked from 40 yards out due to a low trajectory kick and poor blocking up front.

The second field goal attempt came in overtime from roughly 49 yards away, with his kick coming up well short. Granted, it was a high snap and the field was wet, but that’s no excuse. Holder Matt Macksood did an excellent job of adjusting, but Geiger’s shaky contact following the clean hold had no chance.

However, the most significant and heartbreaking moment occurred in overtime. Hoosier kicker Griffin Oakes missed his third straight field goal. If made, it would have given Indiana the win. But Spartan Drake Martinez received a personal foul call for attempting to jump on one of his teammates’ backs to give him a boost. Indiana got another chance and took advantage as they had been doing all night. Oakes nailed the chip shot game-winning field goal.

Michigan State is winless in Big Ten play, yet are undefeated against non-conference competition in 2016. Lucky for the Spartans, they have a date with the BYU Cougars this Saturday at Spartan Stadium.