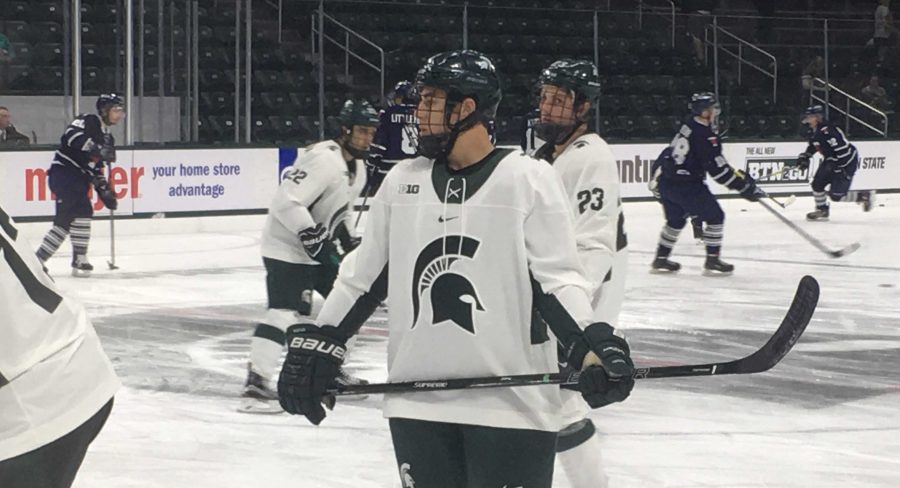 EAST LANSING, Mich — Michigan State opened their 2016 season with a 2-2 exhibition tie against the University of Toronto on Sunday. The Spartans preceded to win the shootout by a score of 2-1. Spartan sophomore Mason Appleton and freshman Patrick Khodorenko had goals for Michigan State. Senior captain Joe Cox and freshman Taro Hirose scored in the shootout.

“Coming in the last month we’ve really been harping on being selfless, tough and disciplined and being relentless all over the ice,” said Cox.

Michigan State was held scoreless after the first period but that all changed when Appleton, last year’s leading freshman scorer, was able to break the tie with a top-shelf shot 6:15 into the period.

“I thought [Jerad] Rosburg made a really good play in the D-zone and got it up to Taro [Hirose] here and Taro found me up the ice and I was able to just chip it around the d-man and then get a good look and pick that corner,” said Appleton about his goal.

Appleton, along with his linemates Hirose and Khodorenko, were perhaps the most dynamic line on the ice

“They both have a lot of skill and they can see the ice really well so that’s why we work so well together,” said Appleton.

That line would again strike again to give MSU a 2-0 lead when Khodorenko found the back of the net just eight minutes later on a beautiful tic-tac-toe play.

Toronto would claw their way back in the game though with two straight power play goals, one in the final minutes of the second and another early in the 3rd.

Michigan State’s power play went 0/7 on the night, including a 1:45 five-on-three in the third. Special teams will certainly be something the Spartans will want to rectify moving forward.

In addition to some good looks on the power play, the Spartans had good looks at both of their goaltenders. Both junior netminder Ed Minney and freshman John Lethemon played in the exhibition game. Minney was only tested six times and made all six saves. Lethemon yielded both power play goals but was able to secure the shootout victory by stopping two of three Toronto shooters.

“We came in with a plan that both those guys were going to play and we’d see where that would go,” said Anastos. “Over the next couple of weeks we’ll probably, as we dig into practice now and prepare for Lake Superior [State] it’ll give us a chance to kind of assess where both of them are kind of charter our course.”

Though Anastos was happy with how his team played, he emphasized that this game had more value as an assessment tool for his team.

“The whole game was an opportunity to assess players more than anything because we really haven’t put into place any systems of play to assess our organization,” said Anastos. “It’s more about how hard we compete, what habits are we playing with, you know as a foundation to building on.”
EXTRA ATTACKER
Michigan State unveiled their new home primary uniforms on Sunday. The new uniforms feature the Spartan logo over an all-white base with green trim under the arms and on the side. A green collar tops off the new look.

“We wore these jerseys today, we’ve got a couple other sets for home that I think the fans will like, but I know the guys enjoyed wearing the ‘Spartan Helmet’ today,” said Anastos.

Coach Anastos also assured us that the fan favorite “script jerseys” based on the 1985 uniform will still be used.