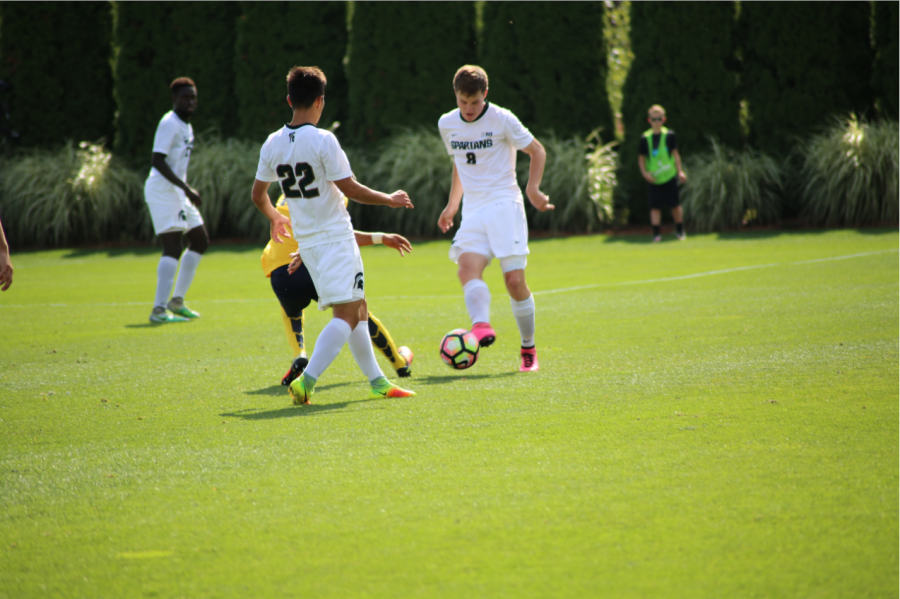 EAST LANSING, Mich. – After losing last weekend to No. 1 Maryland, No. 25 Michigan State got back to winning ways on Wednesday afternoon, defeating Bowling Green 1-0 on a wet, windy Michigan afternoon.

For most of the game, the Spartans had the majority of the possession and always looked like the team more likely to score. Michigan State outshot the Falcons 6-4 in the first half, and while they didn’t find the back of the net, the coaching staff was anything but nervous at halftime.

“We had good possession in the first half, but we weren’t trying to get in behind,” MSU head coach Damon Rensing said. “Once we were able to do that, we unlocked some things going forward.”

It took until the 63rd minute to break the deadlock, and the goal scored was worthy of a win against any team in the nation. Movement down the right side from Giuseppe Baroni and Brad Centala ended up with a cerebral Baroni back-heeled flick right into the path of sophomore forward Ryan Sierakowski, who found himself alone with Bowling Green goalkeeper Anthony Mwembia, and powered home a right-footed shot into the top-right corner.

The goal served as the sixth of 11 that Spartan underclassmen have scored this season. It also made Sierakowski the team’s leading scorer on the season, with three goals through eight games.

Bowling Green did eventually create chances as Michigan State fell back and absorbed pressure. The Falcons created the majority of their chances down the left sideline with crosses into the box, but junior goalkeeper Jimmy Hague didn’t really have a tough save to make down the stretch.

“Today was a big win for us coming off of Maryland, so getting that result was big-time,” Hague said. “I think we’ve had an extremely good start to the season, we’re in good form, so we’ve got to keep going.”

The end of the game didn’t come without controversy, as the Falcons had two legitimate claims for handball turned down by referee Carmen Serbio. Both claims came in the last five minutes, as Bowling Green pushed for an equalizer, so it was unsurprising that on both occasions, a couple Falcon players were in the ear of the referee.

Furthermore, the final whistle came with some pushing and shoving from both sides, leading to a skirmish in the MSU goalmouth. Mwembia was red carded after the game for his actions, while MSU escaped without any future suspensions for their game on Sunday with Ohio State.
MSU moves to 6-2-0 on the season, and travels next to Columbus on Sunday to play the Ohio State Buckeyes on BTN. Kickoff is scheduled for 2 p.m.