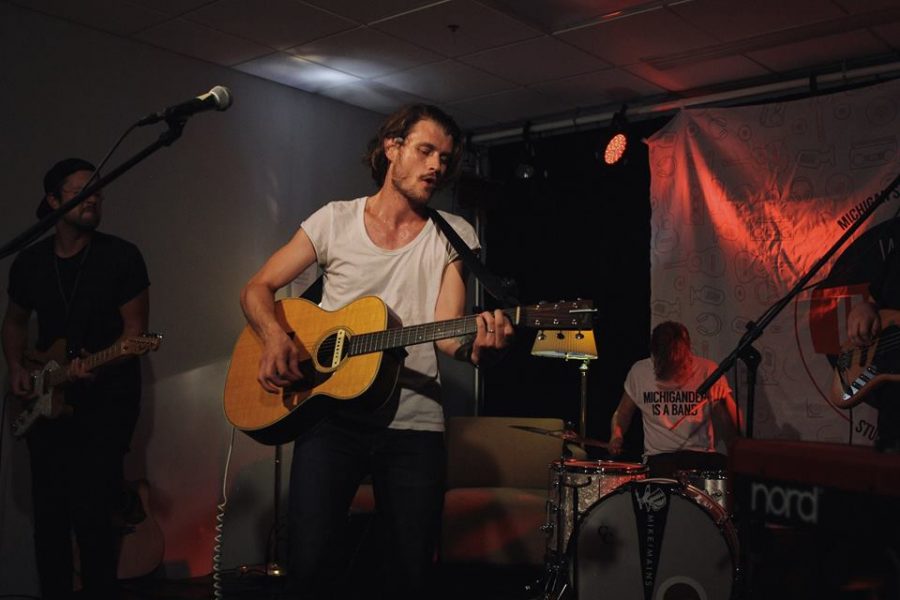 Mike Mains and the Branches is husband and wife duo Mike and Shannon Mains. They stopped by MSU on their Living Room Tour with fellow Michigan native Michigander and The Burley Griffin.

A few hours before the show, Mike sat down with me for a short interview about his origins, musical inspirations, and love for live shows.

So let’s start off at the beginning, where was your first band practice?

Man, oh man, first band practice would have been in Gainesville, Texas at our drummer’s dad’s old church. No one was there besides the band. It was fun, it was really really fun. It felt like the sky split open and heaven kind of fell down, you just felt magical.

Where was your first gig.

It was a coffee shop not too far from here, in Perry, Michigan, just down the road and I can’t remember the name of it but it no longer exists. But it was a really charming first swing at playing music.

So you started off in Texas, but your first gig was in Michigan?

I’m from Michigan and my wife always says “Leave out Texas because it just confuses people!” but I lived in Texas for a year, met a couple of musicians down there and then we came back to Michigan. Our band is actually primarily from Owosso, MI, which is just north of here. So we’ve got a pretty good following and fan base in the Lansing area and Michigan in general.

Alright let’s switch things up a little, what is your favorite meal for under 10 bucks?

What are the last 5 artists that you listened to recently? Besides yourself, of course.

The last five…well today I listened to Justin Timberlake’s “CAN’T STOP THE FEELING”, I love that song. The Tallest Man On Earth and his new record “DARK BIRD IS HOME”. Catfish And The Bottlemen and their record called “THE RIDE”. Sufjan Stevens. Carrie and Lowell, who I love. Besides that…Born To Run by Bruce Springsteen.

Do you feel like the music that you listen sort of reflects in the music you make? Are they very similar?

Yes, in some aspects…I find myself fascinated by Springsteen a lot. You know the guy 67 years old, he’s been making music since the early seventies and he’s more relevant today than he’s ever been. So I always go back to him, I just think if it worked for him, what lessons can I learn? He’s my hero. I think his sound is reflected in, I guess, human struggle. That we’re all just trying to make sense of joy, pain and trying to figure out our place in the world. I don’t know that there’s anyone who’s been able to put their finger on it better than Springsteen.

As a musician, the more music you listen to, the better you understand your craft. Do you find it becomes important to keep up with the newest music, and keep listening even when on the road?

Absolutely, the last couple years, I have…lost touch with what’s going on in popular music because I think I’ve been in in my head a little bit too much. Just now over the last couple months, I’ve come back to the surface a bit. There is some great stuff that is happening, I think what Twenty-One Pilots are doing is incredible…there is a lot of good stuff out there.

Who do you think is your stereotypical listener? Who comes to your shows, listens to your music?

A person who…isn’t afraid to ask the hard questions. Why am I here? What am I doing while I’m here? What awaits me after? How can I make the of it?

Tell me more about the living room tour.

It started off as a joke, there are guys who do house tours, living room tours. It never dawned on me until January of this year to try it. It excited me to take these high impact shows that we do and somehow compress it, fit that into these tiny little living rooms. It also scared me…It was something I’d never done before. I think there was an allure in that too, to be in uncharted waters. It’s been fun to to use these environments, these intimate settings, to play new songs and get a feel for how they resonate with people.

Do you like the energy that goes along with that? Living room sets don’t have a lot of people, but it’s coming at them all at once so people respond differently.

The energy is high and it’s very warm. For me, every night and every crowd is different. I’m trying to catch a wave…the first couple of songs your chipping at it, and you’re fighting. You’re almost trying to catch lightning in a bottle and if the crowd opens up, if you’re open…[slaps hands together] you kind of crash together and then time stops. It feels effortless and like you’re gonna live forever and I never want that to end. It’s what I live for.

You’ve been to MSU before, any good memories?

Yeah, yeah I have…I dated a girl who lived here when I was a kid so plenty of memories. I’ve slept in dorms, ate the cafeteria food. I’ve had many a drunken night stumbling around this campus, as well, in my younger days.

People often say that MSU has some of the best cafeteria food in the state, what do you think?

I would agree, don’t tell Central Michigan University I said that, I was up there for a while too and theirs is garbage.

So what’s next for Mike Mains?

Tomorrow. We play Grand Rapids, Michigan for another sold out Living Room show. We’ll be out on tour until October 23 and then after that, I take a break with my wife and we prepare for recording the next record.

Are you excited to be recording?

I am. I’m not fully ready, I don’t know that you ever are…but I look forward to it. A studio to me is like stumbling into a kitchen. Your goal is to create a really great meal or try to come up with a wonderful recipe that you can share with people. A big portion of it is trial and error…you pull something out of the oven and it’s really really really bad. But you keep working at it, you keep tweaking it and eventually lightning strikes and there’s this magic. You wonder why you spend all this time and energy for something that’s about forty minutes long. I don’t know. But I love it.

Find out more about Mike Mains & the Branches at http://mmandtb.com