The Battle for the Megaphone 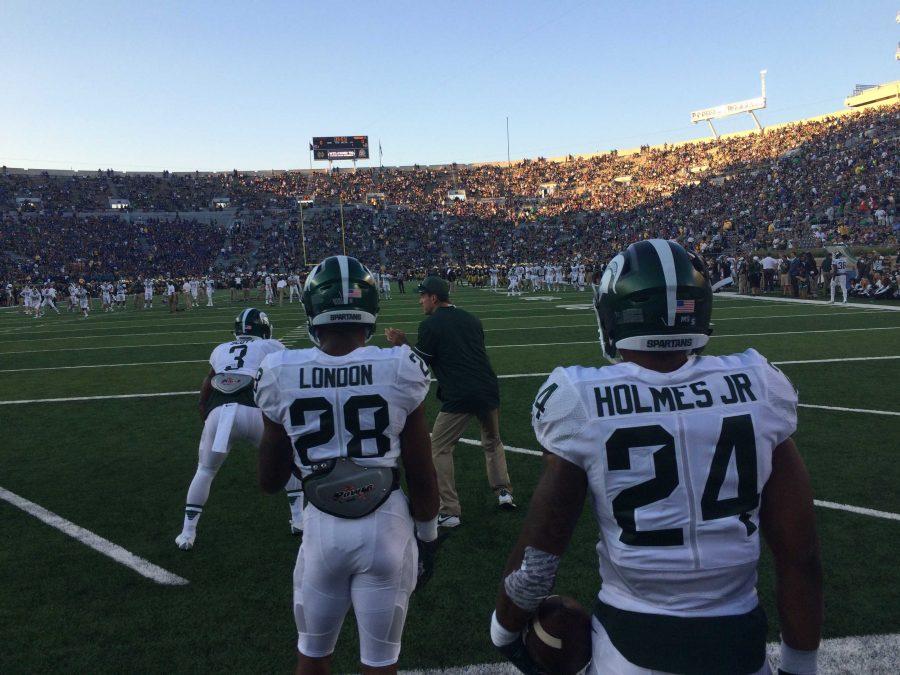 Time stood still as the ball traveled through the air. Cutting the warm night air, the ball continued to spin. The dark brown pigskin up for grabs. Every eye on the ball wondering what will happen next.  As the ball finally dropped towards the field, the air was sucked out of the stadium. The gravity of the moment became crystal clear.

What seemed for an eternity only took a matter of seconds. It happened so fast. In a blink of an eye it was over. Immediately Irish fans celebrated the interception–Notre Dame football.

However, Michigan State freshman wide receiver Donnie Corley swung all the momentum to the Spartans’ sideline.

“I expect Donnie to have those type of games, he’s a great football player,” coach Mark Dantonio said. “Big catch in the end zone, pulled it away from a guy, and big catch at the end of the game where he’s got to adjust to an underthrown ball. He’s that type of player.”

In a flash, the Spartans sucked the wind out of the entire stadium. Yet it was what immediately followed that dazed Notre Dame.

“The two-point conversion got us going,” Dantonio said.

Lining up for the two-point conversion shocked the Irish. Stunned and confused, Notre Dame became flat-footed, and for two quarters the Irish did not know how to handle the Spartans.

“We got too far behind and certainly when you put yourself in that kind of hole it’s hard to dig out against a really good team,” Notre Dame coach Brian Kelly said. “Michigan State, give them great credit. They came up with more plays today than we did.”

Michigan State imposed their will for two straight quarters. The Spartans were tougher and played with more of an edge. Every collision had a little extra pop. The Spartans were flying around the gridiron making plays and showcasing a violent, hard-nosed grit about themselves.

“We take it from here and start to develop an identity,” Dantonio said. “Tyler O’Connor played well and showed some moxie. He made some huge plays.”

The senior quarterback went 19-of-26, throwing for 241 yards and two touchdowns.

However, it was his legs that proved to be the difference, as O’Connor had 10 carries for 43 yards. Picking up first downs on quarterback sweeps to extend drives, O’Connor and the Spartans’ front line imposed their will.

“[It was a] great win for us down here at Notre Dame in a great environment,” Dantonio stated. “We came down here and thought we needed to win on toughness. I thought we did that. We had to be able to run the football, we were able to do that.”

Michigan State capitalized on the running attack as well with Gerald Holmes and LJ Scott pounding their way for big productive runs.

Holmes finished the night with 100 yards on 13 carries with two touchdowns, and Scott scampered for 98 yards on 22 carries while notching a score himself.

“When the lights come on, you gotta be able to make big plays,” Dantonio stated. “I think most of our players, whether it’s this game or other games in our schedule, they sit here and they dream about these opportunities.”

After the Holmes 73-yard touchdown to stretch the advantage to 36-7, Michigan State surrendered wiggle room to the Irish.

On the ensuing kickoff, the Spartans kicked the ball out of bounds giving a little life to the Irish as they began their drive at the 35-yard line. As Notre Dame fans began exiting the stadium, they stopped in the middle of the aisle due to the penalty.

With three minutes and change left in the third quarter, Notre Dame only needed four plays to march down the field and score.

Notre Dame rattled off three touchdowns to pull within eight. With the electric crowd growing louder and louder with each score, Michigan State needed to make a play after going conservative.

“It was a great rally by Notre Dame,” Dantonio said. “DeShone Kizer had a great third and fourth quarter, he was very poised. You don’t count the teams out. You play a quality team like Notre Dame, you don’t count ’em out.”

With 80,795 fans in attendance, the noise level was deafening. With a snap of the fingers, a giant was awake.

“That wave starts to roll on you,” Dantonio said. “It’s tough to stop.”

Despite the hostile environment and a stadium packed to the brink, the Spartans held on for their second win of the season while knocking Notre Dame out of playoff contention.

With the victory, the Spartans took the Megaphone Trophy back to East Lansing, and now MSU holds all four of their rivalry trophies at the same time.

While O’Connor became more comfortable as the man under center, the Spartans made a statement to the rest of the country that they are still the Big Ten champs. And until they are knocked out, nobody should sleep on them when discussing “Who’s In?”