Who is Mike Mains? 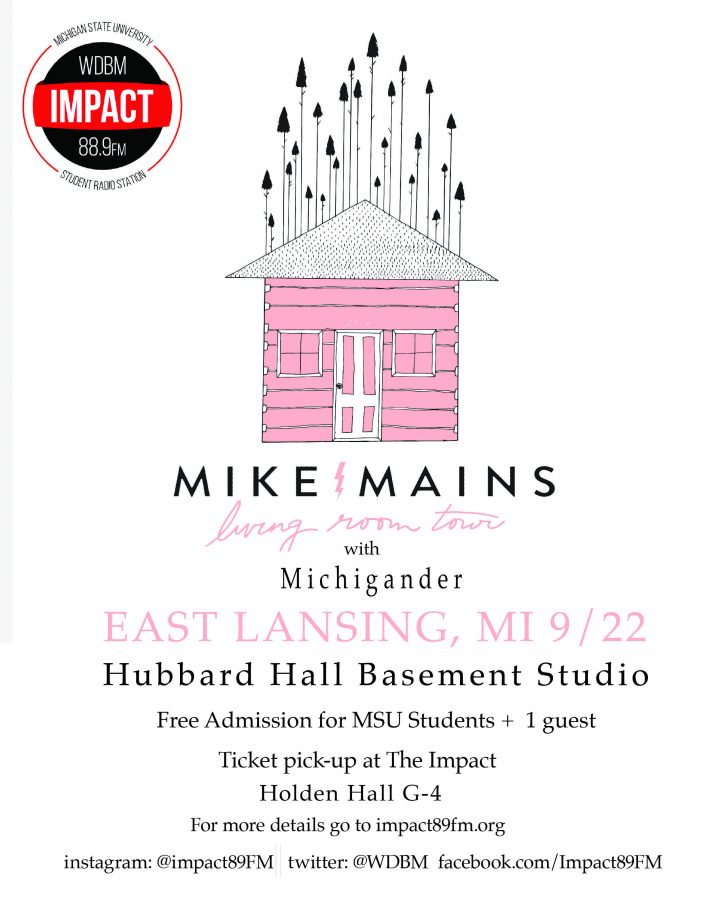 The Impact will be hosting the East Lansing date of Mike Mains’ Living Room Tour at MSU on September 22. Mike Mains himself will be performing with indie favorite Michigander. Tickets for MSU students plus one guest are now available for pick-up at the Impact station, and non-students can keep their eyes open for chances to score tickets during our upcoming Top 5 At 5 giveaways!

So, who is Mike Mains?
Their Members
The only two regular members are Mike Mains and Shannon Mains — and yes, they’re married!
Their Beginnings
Formed in 2009 in Texas, Mike Mains and The Branches have two full-length albums and two EP’s. They soon relocated to Mike and Shannon’s home state of Michigan. At the time, they were joined by David Denison and Jacob Burkhart, who later left for various reasons.
Their Label
They’re independent. But how does that work? It’s all about sites like Pledge Music and Kickstarter. Shannon talks about this in an interview with Anthony Glaser. She said: “I think it’s a really cool opportunity to see — not in a condescending way — but to have your fans really put their money where their mouth is, so to speak. You can say you really like a band, but to be that band, and then to see those people responding to something like that…Whether it’s bringing cookies to a show or giving us five or ten dollars to make a record, I think seeing that your fan base is more than just a group of people who believe in you and that’s a support group, it’s almost like a family. It’s really cool. After we did our pledge, we listened to the Amanda Palmer TED talk on crowdfunding, saying that the way that music is going, it’s not, ‘How do we get people to buy me things,’ but, ‘How do we get people to experience and how do we get music to people?’ I think crowdfunding is a really unique, beautiful way to do that.”
Their Music
[su_youtube_advanced url=”https://www.youtube.com/watch?v=Ty57Lghld8Y&index=3&list=RD6z4ruIbCYZ0″ rel=”no”]